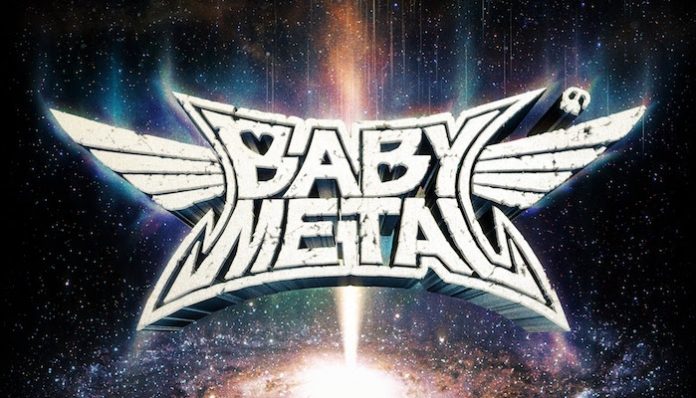 So, you’re an unapologetic pop (K-, J-, dark-, other) fan. Maybe your fingertips are horribly punctured from all the sewing of patches on your heavy-metal battle jackets over the years. Perhaps you’re fascinated by the things people come up with to get other folks to part with their hard-earned cash. Choose the hill you wish to die on, plant your flag on it and make sure BABYMETAL are in your earbuds.

The third full-length of candy-coated riffage from the Japanese pop-thrash brand (that’s not a typo, friends) is downright alluring. Yes, the idea of a trio of tweener Asian girls singing sweet pop harmonies while a faceless Slipknot tribute band thrash away behind them is right up there with fidget spinners, Members Only jackets, Chia Pets and Creed compact discs. The success of those things mentioned is all about the marketing.

Read more: BABYMETAL say Yumimetal is “always a family member to this group.”

Admittedly, things have been kind of melancholy in the BABYMETAL universe. The untimely passing of guitarist Mikio Fujioka in early 2018 was certainly a tragic loss. As any BABYMETAL stan will tell you, most of the drama comes from Yuimetal’s (aka Yui Mizuno) mysterious absence. Leaving the lineup due to health problems, remaining members Su-metal (Suzuka Nakamoto) and Moametal (Moa Kikuchi) take up the slack. Really though, who cares? The bottom line is: The show must always go on.

And it certainly does ramp up across the 14 songs on METAL GALAXY. But here’s the thing: When you pick the locks on your prison of guilty pleasures and set yourself free, you’ll discover that METAL GALAXY is positively striking in its abject weirdness. “Night Night Burn!” welds crunching metal riffs against synthetic horn parts that sound like Avenged Sevenfold teaming up with Barry Manilow for a remake of “Copacabana.” The hi-tech chrome-plated bhangra beats of “Shanti Shanti Shanti” feels like a Bollywood remake of Blade Runner, while “Kagerou” is heavier than anything on that last Royal Blood LP.

Read more: BABYMETAL haven’t replaced Yuimetal because there’s “no one like” her

And there’s the trick: When it looked like the Babes In MetalMarketingLand weren’t going to fix what wasn’t broken, they flipped the script to Frankenstein-graft some sweet sonic scenarios that mean, cynical fuckers couldn’t deny. We didn’t get “Doki Doki Morning (2020 remix),” but we did get “IN THE NAME OF,” the best metallae-ton jam you’ve ever heard with Darth Vader on vocals, prior to him stealing Godflesh’s sustain pedals.

BABYMETAL may very well be that Great Rock ’N’ Roll Swindle the Sex Pistols’ late manager Malcolm McLaren kept telling us about all those years ago. But Japanese engineering usually trumps American arrogance in the end. The new BABYMETAL album is so unexpected with its treasures, you better trust yourself to either run away from the close call or order all that METAL GALAXY merch, stat. What’s in your wallet?

METAL GALAXY dropped Oct. 11 via BABYMETAL Records, and you can check it out here.