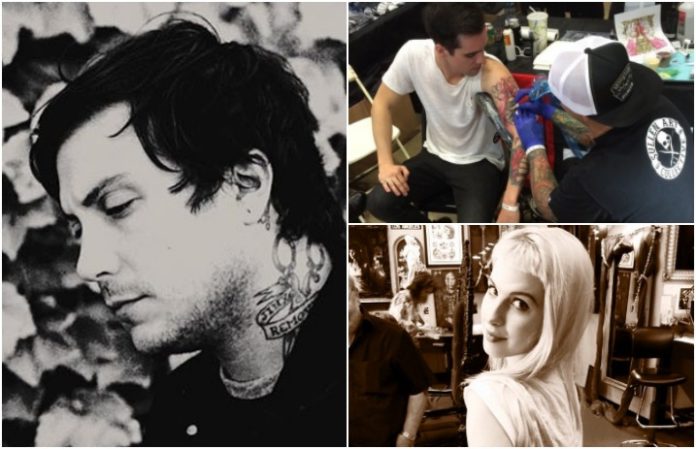 Before they were touring across the world and putting out music of their own, your favorite musicians were just fans themselves, and they have the ink to prove it. Head below for tributes to everyone from the Misfits to Alkaline Trio.

BRENDON URIE (PANIC! AT THE DISCO)

Second session with my dude @richiebon on this @everytimeidie piece by @jordanetid Only couple more to go. ����

The Panic! At The Disco frontman’s upper arm features the cover of Every Time I Die’s 2009 full-length, New Junk Aesthetic, whose artwork was created by the latter’s guitarist, Jordan Buckley. Urie later appeared on ETID’s “It Remembers” from their latest, Low Teens.

Caption this photo! Shot by @elliemitchellphotography

Chris Motionless has quite a collection of tattoos inspired by other artists, including two paying homage to the Misfits: their Crimson Ghost logo on the back of his left arm and lyrics (“I was cryin’ on Saturday night”) on his jaw line. He also has a portrait of Morrissey on his left forearm and both Alkaline Trio’s heart skull and H.I.M.’s heartagram on his outer right arm.

Both All Time Low’s Jack Barakat and Rian Dawson separately inked the Blink-182 bunny as their respective first tattoos. Dawson was the first to take the plunge, and Barakat credits him with garnering the attention of Mark Hoppus, which eventually led to things such as touring together and getting Hoppus to appear on “Tidal Waves” from 2015’s Future Hearts.

Hayley Williams used her love of Elvis Presley as inspiration for some ink. The Paramore frontwoman got the TCB lightning bolt, which stands for “Taking Care of Business” and was what Elvis called his backing band. Williams told The New York Times she grew up on Elvis thanks to her grandfather’s obsession and memorabilia collection.

So kool my memoir will now read #nationalbestseller on the cover, thank you to everybody that read my story ���� #DRUMSDRUMSDRUMS #CANISAY

The Blink-182 drummer paid homage to hardcore act Dag Nasty by inking the title of their 1986 debut album, Can I Say, on his chest (and used it as the title of his own memoir, as well). He also had the band’s flame logo on his leg, which was one of his first tattoos, but he lost it from burns sustained in his 2008 plane crash.

Looking out at the beautiful day in Guadalajara Mexico! We can’t wait for tonight’s show! Time for soundcheck! #THEBLACKMASS

Andy Black’s first three tattoos are all music-related and accumulate on his left forearm. The first, an Alkaline Trio heart and skull hybrid, was inked for a girl he was dating at 15. The second is the Misfits logo, and the third is the Danzig logo, the latter of which he received at a house party in Cleveland using his wallet’s art as a reference.

Nickelsen has a Ryan Adams tattoo on his inner arm, inspired by Adams’ 2008 full-length Cardinology.