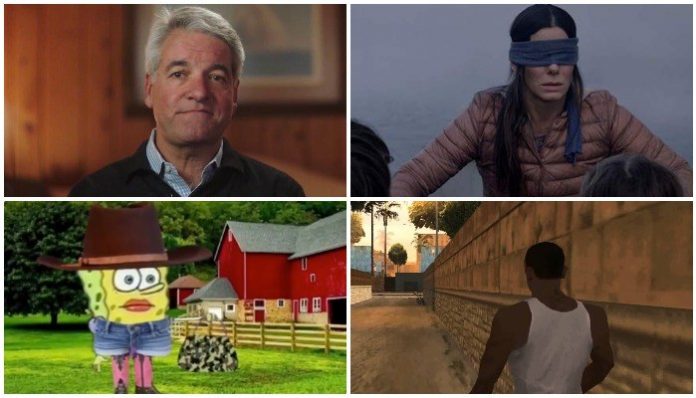 Social media has helped shape many elements of our culture from fashion to humor, which is often a result of memes.  Any Twitter user can scroll through their timeline for less than five minutes and probably stumble across an entertaining meme that might actually make them laugh out loud.

Read more: Taco Bell is offering free burritos until next month—here’s how to get one

While 2019 is far from over, we’ve rounded up the 10 best memes that graced social media this year, with influences from Harry Potter to Avengers: Endgame. Check out what we picked below.

me when here we go again comes on pic.twitter.com/qiBCWf3V4r

Inspired by Grand Theft Auto: San Andreas, this meme perfectly sums up all of our repetitive decisions that we know we shouldn’t be doing. Whether it’s playing the same song 50 times in a row or keeping ourselves up all night on our phones, this hilarious meme has been used to describe reckless decisions made by everyone.

what if we kiss in a Jones BBQ and Foot Massage? 🙈🙊 pic.twitter.com/iTDqAYkPUt

what if we accidental kissed 🤭 in the microsoft bliss screensaver field 😳 pic.twitter.com/6OIYfqWmMg

This meme has people fantasizing about kissing their crushes in bizarre places that you definitely wouldn’t have ever thought of before. With no limits as to where people will take it, they all become even funnier when there are goofy emojis included.

Netflix released Bird Box at the end of last year, and by January the “can’t hear, can’t speak, can’t see” memes were in full swing using Sandra Bullock as the main character. Many of the themes were music-related, which made us laugh even more at the trend. .

In ~72 hours this will be completely incomprehensible pic.twitter.com/QljE5XSWHM

30-50 feral hogs coming to your yard as soon as you send your kids outsidepic.twitter.com/zNUjXEtT8T

One made on Twitter participated in an online conversation about gun control last month that created one of the biggest memes of the year. He asked how he was supposed to protect his children while they play in his yard from the “30-50 feral hogs” that bombard it within “3-5 minutes.” The ridiculousness of the tweet led to too many memes to count, all of which are funny.

Job Interviewer: Describe a situation when you went above and beyond for a customer?

“What would you do for Beyonce tickets?”

Netflix’s Fyre Fest documentary, FYRE, showcased many ridiculous aspects of the failed music festival, but no story stuck out more than that of producer Andy King. Billy McFarland, the co-organizer of the event, apparently asked King if he would suck the chief of Bahamas customs’ dick in order to get tanks full of Evian water to go through Bahamas’ customs.

“I literally drove home, took a shower, drank some mouthwash and I got into my car to drive across the island to take one for the team,” King reveals in the documentary. “I got to his office fully prepared to suck his dick.”

The shocking moment led to a slew of memes, making King the unofficial hero of the documentary.

Bratz dance to “Not The American Average” by Asking Alexandria pic.twitter.com/D7tpcUkJPr

Earlier this year, a meme of Bratz dolls dancing to any and every song made us crack up every time we came across a new post on Twitter. They did it to our scene favorites such as Paramore, Panic! At The Disco, Bring Me The Horizon and many more.

Prior to Avengers: Endgame’s release, the film put out posters that suggested the fate for each of our favorite characters. Those posters quickly became hilarious memes about drag queens, canceled TV shows and more.

No one:
J.K. Rowling: Voldemort has a 12-inch penis

When J.K Rowling began spilling quite a bit of Harry Potter facts, most of which a majority of wizard world fans will admit they really didn’t need to know, it quickly became a meme. The facts took a mostly sexual spin, but they were laugh-out-loud hilarious.

klaus after the other
coming back to hargreeves
the present: kids: pic.twitter.com/mPeUGUjz64

me explaining
my love for my
cat and how i
would die for him my cat pic.twitter.com/VoklIxcdDD

This meme of people explaining things to their parents, friends and pets while having a total meltdown is as relatable as it is funny.

the main character of every coming of age movie ever moving from a big city to a small town in the middle of nowhere pic.twitter.com/yUsTWfeoTV

me leaving my room after watching peppa pig to tell my momæ i want a cookæ pic.twitter.com/lWNuMGaoWo

This meme of SpongeBob traveling the world is honestly underrated. It shows what people feel like when they do something “cultural,” even if it’s barely anything significant and uses SpongeBob making an amusing face to convey that.

What was your favorite meme this year? Sound off in the comments below!