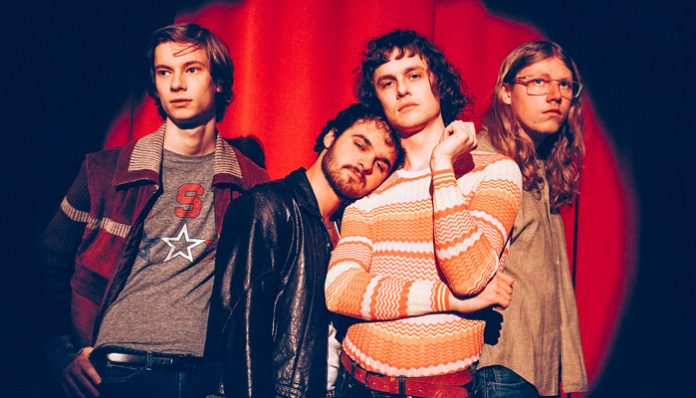 In these troubled times, America is embracing a wide swath of laptop and synth-driven pop stars. Meanwhile in the United Kingdom (the country that practically invented electro-pop), there’s a new consciousness of British guitar-rock bands plugging into guitars and turning up amps. And they’ve brought hooks and riffs to spare.

Here are some of the most impressive British guitar-rock bands, cranking it out with six strings and amps on high. Some of these tracks will give you earworms. Others may make you strap on an air guitar. And there may be a few that will hurt your hearing entirely. (Which is still a great feeling, actually.) Love them or hate them, one thing is certain: A guitar still looks cooler onstage than a laptop.

Read more: A biopic of Motorhead frontman Lemmy Kilmister is in the works

Hailing from Cardiff, Wales, Buzzard Buzzard Buzzard are what frontman/guitarist Tom Rees put together to satisfy the rock ’n’ roll demon inside him. B3 deliver everything from ’70s-style glam riffs to contemporary takes on psychedelia that make them just as much of a time machine as a rock band. Their American debut, the Non-Stop EP, comes out July 10. With this much promise, we can’t imagine what their third LP will sound like. Theirs is the ground floor to be on, friends.

London-based Sea Girls are that band you’ll want to keep to yourself forever, but their musical vision is infectious. The wry lyrics are both whimsical and spot on: Frontman Henry Camamile comes off equally sophisticated and awkward. Guitarist Rory Young channels Arctic Monkeys and the Strokes (and maybe a smidgen of the Smiths), only with more energy. Their U.S. debut EP, Under Exit Lights, is a great place to hear a British success story in the making. Sea Girls have the skill to turn diary entries into anthems.

Girls In Synthesis – “The Images Agree”

The most extreme band on this list, hands down. London-based trio Girls In Synthesis have no synths and one girl (driving drummer Nicole Pinto) but plenty of smoldering rage. Shouting vocals about the state of the world are coupled with relentless, stripped-down punk and (un)controlled feedback. At gigs, you might think GIS leave beads of sweat on their guitars. Upon closer inspection, it might be the hardware on their axes bubbling from the intense heat. Get the full force with Pre/Post, a compilation of their collectible singles.

If Girls In Synthesis are the rabid blood pumping through England’s rebel heart, Sports Team poke fun at the British middle class. Alex Rice articulates his country’s frustration via third person. Guitarist Rob Knaggs has an unerring sense of the appropriate, creating a DNA of scrappy ’90s indie rock and Britpop. (Parquet Courts covering Blur’s Parklife?) Their debut album, Deep Down Happy, is equal parts alluring in its chaos and absurdity (see: a song about Ashton Kutcher called “Kutcher”).

Birmingham quartet Future Fires are a conduit for possibilities. Their bio says they’re influenced by bands as disparate as Joy Division and Editors. But in practice, they are creating an anthemic brand of British guitar-rock. It’s not moody or unusually textured. What they offer is much more visceral (OK, we’ll say it, “emotional”) than your typical summer festival lineup fare. Their music doesn’t belong to radio executives or “the scene.” But you can hear why those two worlds would come to their table. You’ll have to wait until December for their EP, but “Halfway Down” is a great place to start.

Hailing from Hull, LIFE are pushing post-punk attitude and darkness into the mainstream. Guitarist Mick Green brings twisted riffs and textured atmospheres to the band’s foreboding tracks. “Switching On” recently got a souped-up remix from IDLES guitarist Mark Bowen. It’s good, but the original version, which follows their 2019 release, A Picture Of Good Health, is positively stellar. If you think the 1975’s “People” is the pinnacle of British guitar-rock action, you may need to get a LIFE.

Against Me! famously wrote a song called “Those Anarcho Punks Are Mysterious…” But listening to Brighton anarcho-punks Austerity deliver their tight, concentric rave-ups is more joy-affirming than secret-keeping. Their 2019 debut, Anarcho Punk Dance Party, tells you that they are in on the stereotype. But while their political rhetoric flies high, the chopping guitars make it feel more like a party than a political science class. All would-be rock ’n’ roll revolutionaries should take note.

The fulcrum of Starsha Lee is dynamic vocalist/polymath Sofia Martins and post-punk/glam guitarist Crispin Gray. His guitar prowess (which lies somewhere between Killing Joke and T. Rex) is the perfect launchpad for Martins to head off in a number of directions, most of which are quite scary. Their latest mini-LP, Love Is Superficial, injects some much-needed danger back into rock music. It’s rock ‘n’ roll as both artistic statement and fear engine.

The Mysterines – “I Win Every Time”

Liverpool’s Mysterines are the vehicle for vocalist/guitarist Lia Metcalfe, who exudes charisma the way other bands garner golf claps. The Mysterines’ conjure PJ Harvey’s classic Rid Of Me era and the more raucous days of the Dead Weather. But Metcalfe has the playing and songwriting skills to carve her initials in the bar-top surface of rock ’n’ roll legend. Take last year’s Take Control EP for a spin and let her do the driving. The Mysterines really need to bring their rock to the colonies once Mother Nature stops hating us.

Dream State – “Are You Ready To Live?”

Much like Future Fires, Welsh band Dream State are filling that space between radio rock and people who miss Warped Tour compilation CDs. Fronted by singer CJ Gilpin and powered by guitarists Aled Evans and Rhys Wilcox and drummer Jamie Lee, Dream State bring the riffs and the determination to move audiences. Imagine a slightly less feral Marmozets and you’re close. Dream State seemingly have much more vision than they’re letting on. By the sound of their debut Primrose Path, we’re glad they’re out there.