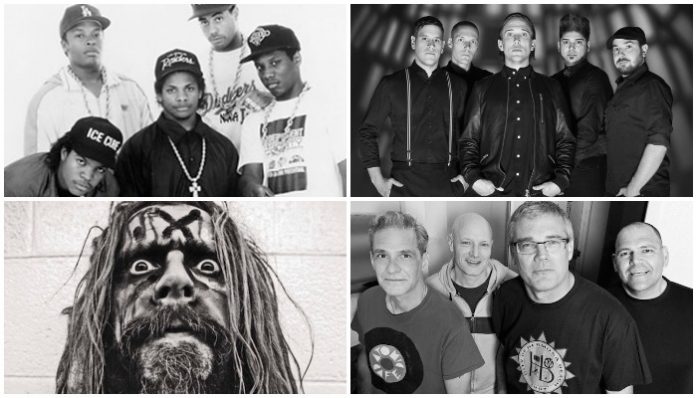 Sometimes in the music industry a new band come along and completely shake everything up by writing an album that blows people away right out of the gate. Living up to the hype of writing a great album is difficult enough. However, some bands created their most classic songs on their first go with their debut albums, solidifying their career from the very beginning.

Take a look below for 10 bands who created their most iconic material with their debut albums.

The birth of pop punk can really be drawn back to the early days of bands such as Bad Religion, Hüsker Dü and, of course, Descendents. The band’s debut record, Milo Goes To College, blended surf rock and hardcore punk with pop sensibilities and still holds up as the best 22 minutes of music they’ve ever made.

The crossover between metal and hardcore punk traces directly to how Suicidal Tendencies caused a rift in both scenes, but their debut self-titled record undeniably fell under the hardcore label. While the band have created numerous incredible albums since dropping their debut, this record holds the staples of their discography. It’s a perfect snapshot of what the L.A. hardcore scene looked and sounded like in the early ’80s.

Bad Brains brought an entirely new perspective to the hardcore scene with their debut record, introducing elements of reggae, jazz and fusion to the genre from their days as a Rastafarian fusion band. After being banned from the clubs they performed at in their hometown of Washington, D.C., the band made their way to New York City and changed the direction of punk for years to come with their iconic record.

Glam rock isn’t looked at too fondly today, as it was a product of labels overhyping many bands who didn’t deserve the praise in hope for another Mötley Crüe or Van Halen, but Guns N’ Roses were the exception to the rule. While they were late to join the party, 1987’s Appetite For Destruction isn’t only the band’s best material but one of the best rock albums ever created.

Wu-Tang Clan are pioneers within hip-hop, and their influence on the genre is undeniably still felt today. The collective’s debut record, Enter The Wu-Tang (36 Chambers), brought together independent rappers and spawned the success of the group’s many members.

While there are countless things you could point to that Dr. Dre and Ice Cube have done today, their beginnings with N.W.A. was what allowed them to move on to bigger things. The group, also including Eazy-E, MC Ren, Arabian Prince, The D.O.C. and DJ Yella, created one of the most influential hip-hop albums of all time and redefined the genre’s evolution.

After more than a decade of killing it with White Zombie, the band ran its course, which lead to Rob Zombie going solo in the ’90s. Zombie’s debut record as a solo artist defined the industrial-metal scene at the time along with bands such as Nine Inch Nails, Rammstein and Fear Factory, among others and solidified his career going forward.

Read more: Can you match these debut albums to the year it was released?

Few punk bands have had as much commercial success as the Ramones, but that didn’t come until much later. Their beginnings entailed the hugely influential self-titled debut, which has some of the core origins of punk in songs such as “Blitzkrieg Bop,” “Beat On The Brat” and “Havana Affair,” among others.

Canadian punk rock has birthed some incredible acts over the years, and Billy Talent’s debut under their official name was part of a big movement in the country’s music scene for bands such as Alexisonfire, Cancer Bats and more to take off. After busting their asses under the moniker Pezz for years, they rebranded to avoid a lawsuit from an American band of the same name and shot to the top with their self-titled debut, which is easily their strongest record to date.

From tearing it up in dingy dive bars in Toronto to becoming an arena-rock band, Sum 41 have indisputably made their mark on punk rock, but it all started with the massive success of their debut, All Killer No Filler. Singles such as “Fat Lip” and “In Too Deep” helped break them into the mainstream. However, they haven’t been able to top the raw energy of that record since despite putting out a number of good albums.