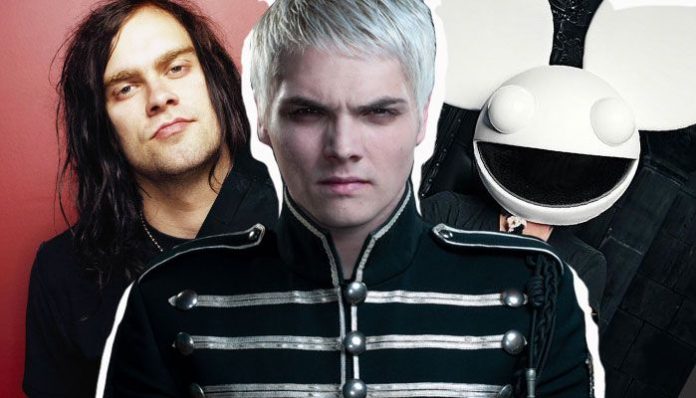 Gerard Way, the ever-iconic face of My Chemical Romance, has participated in a number of musical collaborations. With the relentlessly rising popularity of his comic book series The Umbrella Academy and a successful solo career under his belt, he’s somehow found plenty of spare time to contribute to other artists’ works over the years.

In celebration of this chameleon-like frontman’s birthday, and while we bite our lips waiting for news of MCR’s reunion tour with coronavirus canceling events across the board, let’s journey back to some of Way’s best matchups and guest spots throughout his illustrious career.

Read more: Mark Hoppus playing +44 songs again will take you back to 2006

If you’ve wondered what Danger Days set in Ibiza would sound like, look no further than this deadmau5 collab. Way’s distinctive vocals are heard throughout the mix of “Professional Griefers.” Released in 2012, it marked a neat precursor to his 2014 debut solo album, Hesitant Alien. The music video shows Way and deadmau5 battling it out with their respective supersized robots in a futuristic UFC fight. Ironically, the world realized last year Way is related to UFC commentator Joe Rogan, so this video was pretty prophetic.

2. My Chemical Romance – “Under Pressure” featuring the Used

Ultimate emo collab alert. MCR and the Used famously teamed up to record the Queen and David Bowie duet “Under Pressure” to raise funds for the Indian Ocean tsunami relief. With both frontmen splitting the vocal roles and both of their bands’ members sharing their respective duties, they made this timeless hit a completely equal collaborative effort.

The duet was part of a prolific bond between the bands at the time, when they were on the Taste Of Chaos tour in 2005, with frontman Bert McCracken featuring on MCR track “You Know What They Do To Guys Like Us In Prison.” The rumors currently circulating that the Used will play a part in the MCR reunion tour suggest this won’t be the last we hear from this iconic alliance.

In 2011, ’80s legends Duran Duran brought Way onstage at L.A.’s Mayan Theater during their concert experience Duran Duran: Unstaged. Together, Way and co. jammed an unreal rendition of the band’s 1981 hit “Planet Earth.” The performance was automatically edited with black-and-white effects that helped Way’s Danger Days-era red hair stand out. Albeit one of the most unexpected collabs, the frontman fit in pretty brilliantly, and we’d welcome another matchup any day.

During their set at Hellfest way back in 2003, Way accompanied his longtime friends in Thursday onstage. The group delivered a blistering “Jet Black New Year” to a packed-out tent and more stage invaders than we could count. Sixteen years later, Thursday would open the Shrine stage for MCR’s first reunion show. The dynamic captured at the Syracuse festival displays how the love between both bands has remained aflame ever since.

5. My Chemical Romance – “We Will Rock You” featuring Brian May

As part of MCR’s headline set for the U.K.’s Reading Festival in 2011, the band enlisted the help of Queen axeman Brian May to perform an air-punching version of “We Will Rock You.” Alongside Way’s expressive interpretation of Freddie Mercury’s classic vocals, the British guitarist also stuck around onstage to provide his distinctive tones to “Welcome To The Black Parade.”

In 2011, blink-182 vocalist/guitarist Tom DeLonge struggled with his vocal performance on tour and needed a stand-in for “First Date,” one of the band’s few songs he had to carry by himself. Way stepped up for his part at the DTE Energy Music Theatre gig, bringing every ounce of his usual verve. He fit in so well with the pop-punk legends that we simply need to see this crossover revived someday.

7. Wrongchilde – “Falling In Love (Will Kill You)”

Way’s contribution to the slick production of Japanese vocalist Kyosuke Himuro’s “Safe And Sound” in 2009 is the pre-Danger Days content we needed. The catchy, defiant rock track was the ending theme for the Japanese release of Final Fantasy VII: Advent Children Complete. However, it was passed up for the English releases, which seems odd considering this contagious number was in English.

2005 saw metalcore mainstays Every Time I Die bring Way into the fold for a relentless track, “Kill The Music.” Possibly the heaviest song we’ve heard Way feature on, his traditional tones burst through the chorus. It provides another window into his impassioned deliveries throughout the Revenge era that still enrapture MCR fans to this day.

New Jersey outfit the Oval Portrait’s chaotic post-hardcore-inspired “From My Cold Dead Hands” houses Way’s vocal contributions from 2003. It’s hard to spot his individual tones in this track as he blends in almost too well. However, Way backs the vocal duties in most sections, including the evocative “I’d rather serve in hell than reign in heaven,” closing the track with the signature wails that MCR fans will recognize from the Bullets era.

What’s your favorite  Gerard Way collab? Let us know in the comments below!