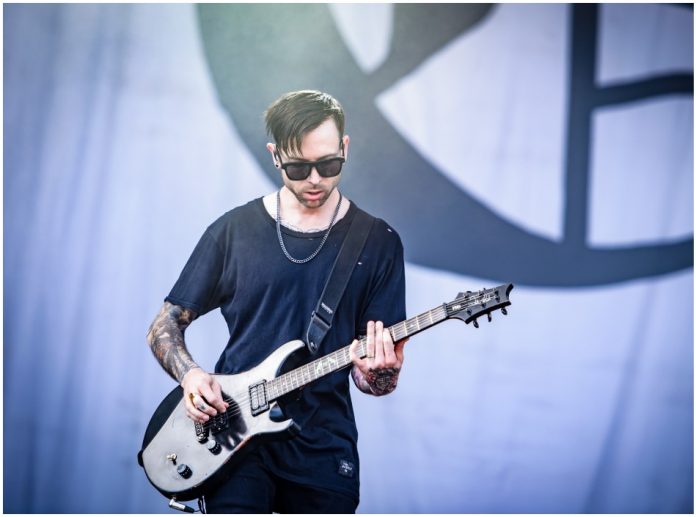 What does the name Billy Martin mean to you? Does it call to mind an artist who’s spent decades performing as a multi-instrumentalist under Good Charlotte?

Don’t worry, that’s totally spot on. As we’ve previously established, though, Martin is a prominent force in shaping the modern alternative music scene. Between numerous production credits, collaborations and more, he’s creating a lasting legacy within the era—and bringing a number of deserving artists with him.

Read on for 15 songs that have Martin’s creative influence behind them.

Torchfvce may claim to be “such a fuckin’ mess” in “Expendable,” but the song itself leaves us doubting that assertion. Of course, it’s probably difficult to stray too far off course with a tenured musician like Martin in the producer’s seat. The dark hip-hop inclinations, aptly described on Torchfvce’s Instagram as “Southern goth phonk,” are a sharp contrast to Martin’s predominantly pop-punk foundations—and that’s exactly what makes this track such a marvel.

Ambient hip-hop artist Mixed Matches set a high standard with his 2019 compilation, Late. Even so, he managed to blow it out of the water the following year. In addition to three more LPs, II, Jesse and Opium, he also released a slew of singles. We’re naturally partial to “Dawnfades,” which boasts collaborative production by Martin and boyband.

If you haven’t listened to “Deep Blue” by Porsche Love yet, be prepared for it to top your soundtrack this season. Shimmeringly catchy, this 2021 single just exudes posi warm weather energy. You won’t be surprised to learn that Martin has a production credit on this one as well, given that he was one of the masterminds behind the summer anthem of 2007. Or, well, the “Dance Floor Anthem,” rather…

Close your eyes and revert back to your 2005 self. What do you imagine 2021 will look like? Myspace profiles blasting synthy, hip-hop-leaning pop punk have to be in the mix, right? Well, we weren’t too far off. The rise and fall of our favorite social media platform aside, Jakkyboí is pretty representative of a scene dream come true. So, it only makes sense that he’d have the Good Charlotte touch present within his discography. If “I Just Got The Feeling That You’re Gonna Waste My Time” feels particularly familiar to you, it’s because it’s yet another track on Martin’s roster.

We were pretty stoked to discover that Lil Xan has some seriously emo inclinations. Maybe we shouldn’t have been surprised. After all, the revelation of his My Chemical Romance fan status came just weeks after he released a track called “Emotions.” What’s better is that the song was co-produced by an icon of the 2000s emo era.

Don’t for a second think that Martin and boyband’s joint efforts are limited to co-production. In fact, Martin is even credited as a primary artist on boyband’s debut single, “Death Note.” The collaboration came to fruition after a Twitter exchange. We’re so happy it did, lest our radars miss one of the most highly recommended artists in modern pop punk.

Read more: 11 alternative albums that prove good things come to those who wait

Because one California-centric track clearly wasn’t enough, Martin decided to lend his creative influence to another just two years later. The 2020 Brennan Savage track, aptly titled “California,” features co-production from both Martin and SLIGHT. While the emo-rap delivery is a far cry from Good Charlotte’s “California (The Way I Say I Love You),” it’s certainly a quality anthem all its own.

Maybe Tomorrow – “Something’s Wrong With Me”

Another Savage collaborator, Maybe Tomorrow, jumped on the Martin production train earlier this year. The resulting, punchy-as-all-hell rap track, “Something’s Wrong With Me,” dropped in June. And as if the Martin credit isn’t enticing enough on its own, This Wild Life’s Anthony Del Grosso has one as well.

Given his production portfolio, it should come as no surprise that Martin has a talent for remixing. Look no further than the spin he put on Chase Atlantic’s “TOO LATE” to see his skills on full display. While it’s admittedly difficult to make this trio sound even better than they already are, the captivating, near-frantic energy of the mix brings a whole new life to the track.

Read more: 9 songs that can perfectly soundtrack a new beginning

If we didn’t know any better, we might think that a Martin collab is a requirement for any successful alternative hip-hop career. Go figure, rapper BEXEY, with his rapidly growing fame, has released several so far. His first track produced by Martin, titled “GARGOYLE,” dropped this past April and featured Curtains as a co-producer. Since then, Martin has been credited on two more: “BACKSTABBER PANTOMIME” and “Whiplash Moodswings.”

CHXPO’s 2019 album, A Bloody Boy Bhristmas Story, is an extensive series of unskippable tracks. But did you know that Martin exerted his influence on one of them? Not only did he produce “Play Your Part,” but it was yet another coordinated effort with SLIGHT. Even better? It appears that we might expect more CHXPO/Martin collaborations going forward.

Kid Bookie’s “On My Rock” is a masterfully edgy display of alt-rock-leaning rap—one that was of course shaped by the collaborative contributions of Martin. It wasn’t the first time that the rapper had pulled in an alternative powerhouse to perpetuate his nuanced sound. He’d previously collaborated with Slipknot’s Corey Taylor on “Stuck In My Ways.”

Read more: 15 up-and-coming solo artists to add to your playlist

I’ve been sleeping on Brandon Coleman up until this point, it’s time to wake up. Don’t just take our word for it, though. Even Martin has been privy to his potential since at least his 2020 album, Remember. Martin left his personal touch on the record through production of the final track, “Waiting.” The song—and record as a whole—is an absolute must-listen for any fans of genre-bending, deeply melodic R&B.

The talents of Martin and Curtains collide once again on Elijah Heaps’ “1st Is 1st!” Listen to the song back to back with BEXEY’s “GARGOYLE” and the pervading dynamic is clear. The collabs underlie each track with catchy, pop sensibilities—a marked diversion from Heaps’ generally melancholic tone but not one that should be underappreciated.

Hip-hop artist Smokeasac has been keeping rock music alive with his eclectic style since 2017. It stands to reason, then, that he would bring on one of alt rock’s greatest artists for collaboration. Martin co-produced “No Way” alongside SLIGHT, infusing a distinct pop-punk element within the track.

What are some of your favorite Billy Martin-produced songs? Let us know in the comments!