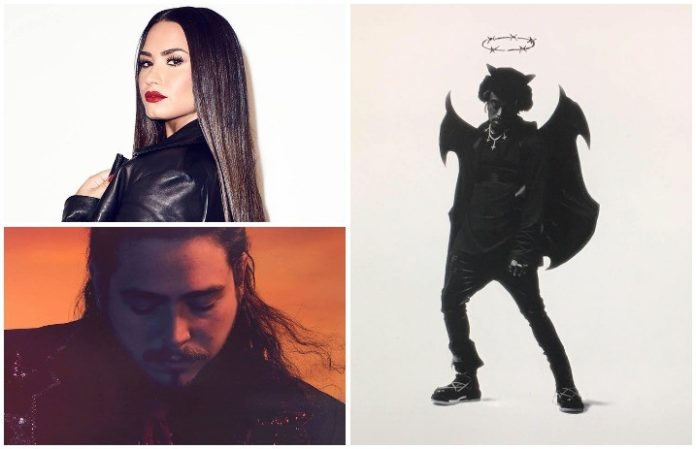 We at AltPress know that being a scene kid is more than just a phase, and apparently some of Hollywood thinks that way, too. You might be surprised to know that some of the biggest celebrities love to get down to My Chemical Romance and Paramore just like the rest of us. Check out 10 celebrities who are total scene kids at heart.

There’s no denying Austin Post, who goes by Post Malone, is one of us. When he was 15 years old, he tried out for Crown The Empire, but didn’t make the cut because his guitar string broke during the audition. Once he was in high school, his metalcore band covered Asking Alexandria’s “The Final Episode [Let’s Change Channel].” He’s covered Rage Against The Machine’s “Killing In The Name” and Green Day’s “Basket Case.” He loves alt rock and isn’t afraid to let his inner scene kid be free. Look how happy he is when he plays “Welcome To The Black Parade” at Emo Nite in the video above.

via GIPHY
Remember when she was on Warped Tour? Besides that, she even stage dove during a Relient K show back when she was dating frontman Matt Thiessen. We can’t forget that before her bubblegum pop songs like “Teenage Dreams” or her EDM, hip-hop-inspired songs like “Swish Swish,” she was featured in 3OH!3’s “STARSTRUKK.”

via GIPHY
In the midst of her time acting as socialite princess Blair Waldorf on Gossip Girl, Meester was hanging out with Cobra Starship. She was featured in the song and music video for “Good Girls Go Bad,” arguably their most popular song with more than 35 million streams on Spotify. Not to mention she’s not afraid to rock some heavy black eyeshadow from time to time.

We love a forever emo queen. Demi Lovato was seen last year screaming songs such as Paramore’s “Misery Business” and Underoath’s “Reinventing Your Exit” at Emo Nite LA. She is always rocking all black and has dyed her hair bright teal a couple of times. Additionally, she’s a big Say Anything fan and even tweeted about it. Demi, never change.

This Supernatural star can act and direct but also sing, too. He took to the stage at the official Supernatural convention in Las Vegas with Slipknot lead singer Corey Taylor to belt out Bon Jovi’s “Wanted Dead or Alive.” Although we would’ve rather them sing a Slipknot tune, it’s definitely entertaining to see this unlikely pair have such chemistry onstage. Let’s hope this performance encourages Ackles to let his inner scene flag fly.