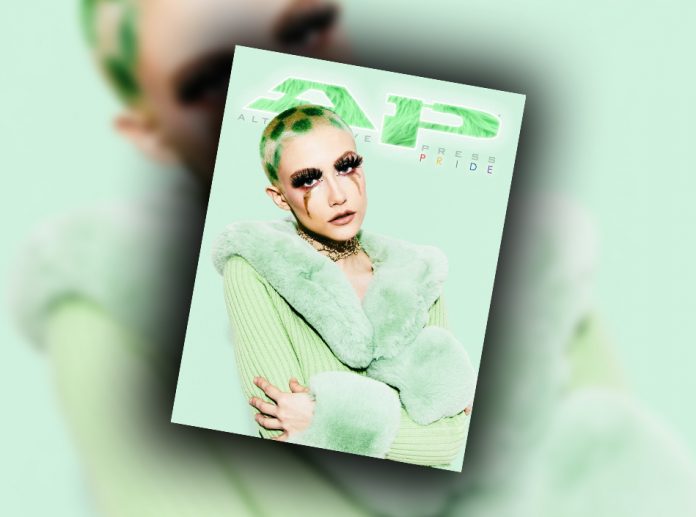 When chloe moriondo was growing up, there weren’t many lesbian artists for her to see as role models. Now, she tells me over Zoom, she’s thrilled to see LGBTQIA+ kids have so much more representation: “Kehlani just came out. That was cool! I love to see it. I love other lesbians in music and art. It makes me happy!” she says, beaming.

moriondo is only 18, but she started her career as a teenager on YouTube, posting ukulele covers of her favorite songs. In a short span of time, she amassed millions of followers and started posting original tracks, releasing a DIY full-length called Rabbit Hearted. in 2018 and signing to Fueled By Ramen in 2020 for her major-label debut, Blood Bunny, out May 2021.

We speak ahead of her appearance on Jimmy Kimmel and a writing trip to L.A. While moriondo still sits in her childhood bedroom outside of Detroit, the last few months have seen her life and career take off in a major way. She’s also happily in love, gushing about her girlfriend of seven months, a childhood best friend who recently appeared in the blood-soaked Jennifer’s Body–inspired video for “I Eat Boys” as her love interest. moriondo’s girlfriend is an art student and talented artist who also works with her on her merch and artwork: “It’s really nice to be able to work together and not get sick of each other with how much time we spend together!” she grins.

The inclusion of moriondo’s girlfriend in her work, and the direct references to loving women in her songs, are a radical and exciting sign of just how far we’ve come. It’s important to moriondo on a personal level, but it means a lot to her fans, too—an audience of often queer kids who are looking for musicians who echo their experiences. To celebrate Pride month and following the release of the vulnerable, fun Blood Bunny, we caught up with moriondo to talk about her experiences as a lesbian artist and being a role model of queer joy for her fans.

I feel like I was always pretty open about liking girls. Like, since I figured it out. There wasn’t ever really an “aha” moment for me. I was born in 2002 so it wasn’t weird, but it wasn’t the most normal thing either. I went through all the phases, and I didn’t know who the hell I was in middle school and high school, but I was always very open about it. Then when I was 16, I fully realized that I was a lesbian. I made a whole YouTube video talking about it because there were a lot of other things in general in my life that I wanted to talk about. I never really came out besides that because I never thought it was that big of a deal.

Did your family react to it at all? It makes such a difference to how you perceive being gay if your family is cool.

No, my family never really cared. I was never taught to feel a certain way about any group of people, which I think is important for people to teach their kids. A lot of weird behavior about different people, especially gay people, is taught. I’m just lucky. I’m glad that I got a family who doesn’t really care that much about who I like.

Do you think being so open has affected your fanbase? Do you have a lot of queer fans?

Definitely. I think there’s a big community of gay kids who like talking about it and like having other people who have been in similar situations and have had similar experiences. I definitely think that there’s a good majority of people in my audience who are gay, and I think that’s sick as fuck because I would hope that it translates that I am not straight in my music.

We discussed it before, but even just referencing women in your songs makes a huge difference.

It’s really important for me to specify who I’m talking about in my songs to a degree at least. If you’re a girl who likes girls, I feel like it’s good to be able to think about it specifically because there are not that many super popular songs that are like that.

If you’re gay and you’re heartbroken, you want music that reflects that.

Yeah, for sure. I just think the wrong pronoun can throw you out of something really fast. It’s important to me in both my music and my videos. I like making sure people know who I am and what I like and what’s important to me, you know?

Totally. There are so many more out, LGBTQIA+ artists now, or even specifically lesbian artists like Hayley Kiyoko. It’s a good time to be growing up queer.

It’s really important for kids and people in general to be able to experiment with their identity and what they think they are. I think there’s so much pressure and stress placed on knowing exactly what your label is and not using a label unless you’re 100% certain [that] that’s what you are. When in reality, I think a lot of the ways that people find out what they are is trying it first.

You need space to experiment, and seeing people like you makes it so much easier.

I tried on just calling myself a lesbian at first, and that was probably the reason why I figured out I was one. I didn’t come out before I knew, but I think people need to just be a little gentler on themselves and other people about identity and sexuality. At the end of the day, I don’t think it should really matter to other people who you are and who you like, even though it can seem like such a huge deal inside. It can be a really beautiful thing to celebrate, once you accept that. A lot of this stuff is just free-flowing, and you just have to roll with it and figure it out when you figure it out.

It’s so important to treat kids with respect while they’re figuring that shit out.

No matter what’s going on in their brain, or how old they are, just treat people with respect in general, especially when it comes to kids learning about themselves. A lot of teenagers are going through different phases of their identities. Parents often think that because it’s a phase, it’s not serious, and that it’s not a real part of their life and it’s not a real part of them. I think the word “phase” has been treated as such a negative [thing], but I’ve gone through a lot of phases in my life that were very real and very important to my life. And I think it’s important for people to recognize that sometimes things can just be a phase, and it’s fine. And it’s just as valid as whatever identity you end up truly feeling that you are.

Totally, and phases are just building blocks of who you will eventually become.

Sometimes those phases stick and become actual, real, permanent parts of you. And sometimes, they’re just parts that are buried a little deeper. That happened a long time ago. I used to think I was a lot of things. And that’s fine. I feel pretty comfortable with myself now. And I think that’s what matters, as long as you feel comfortable with yourself in the present.

People use the word “phase” so negatively, especially when it comes to gender and sexuality.

I’ve definitely had a lot of weird experiences with my gender. I’m an 18-year-old, [and] I still don’t really know exactly what I am. I definitely identify with femininity, and if anyone were to call me a woman, I wouldn’t object. The concept of being nonbinary was never really a super big thing growing up for me, but I never really identified with it that much with it because I was like, “Well, I think I’m a girl.”

I get that. I wanted to ask how you identify because I did read that you were nonbinary.

I would consider myself nonbinaryish. I appreciate you asking because I didn’t expect Wikipedia to actually grab hold of that and assume that! I’m just a girl. Growing up on YouTube a little bit, people always thought I kind of looked like a boy, and I was like, “Whoa, that’s interesting.” I kind of loved it. I always loved androgyny and not looking like how people would often expect me to be.

I think if you’re in the public eye, people will just take things you say and run with it, even if you’re still figuring yourself out.

It’s so fun to mess around, and when I don’t want to look as feminine as I feel like I do right now, I can just take off the big eyelashes. You can just wear super baggy clothes, and it feels fine. The haircut has definitely helped with the gender thing because I was feeling a little weird about it before I shaved my head, for sure.

That’s good! So you have a girlfriend now, right? How’s that going?

It’s good! We want to get an apartment at some point. Hopefully in the next couple of years. We’re taking it slow, but when we get it, we want to get cute pink furniture. We’ve been together seven months, but we’ve been best friends since like fifth grade. We’ve basically been together forever. It was a very weird, slow-burn turmoil thing, and we dated on and off in middle school too because we were weird and still figuring stuff out. We had a lot of firsts together. I think it’s really sweet now that we’re together, and I feel like we’re gonna be together forever, personally. I love being with my best friend. It’s fantastic.