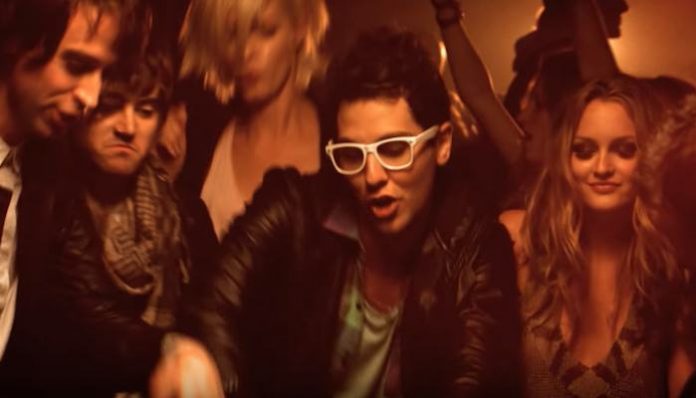 It’s hard to believe it’s been 10 years since Hot Mess and a time when Cobra Starship frontman Gabe Saporta single-handedly helped American Apparel meet their annual purple hoodie quota. After nine years and four albums, Cobra called it quits in 2015, but their mark on the neon-pop movement of the mid-2000s will live on forever.

In celebration of their breakthrough album Hot Mess bringing the scene-friendly dance party for a decade, the former frontman sat down with AP to relive the era in his own words. From landing a Gossip Girl cameo to the tongue-in-cheek response to the influence of Fall Out Boy’s Pete Wentz, head below for a full track-by-track on the third Cobra Starship record ahead of its anniversary this weekend.

“Nice Guys Finish Last” was inspired by Britney Spears’ “Toxic,” which is one of the best songs in the last 20 years. It was inspired by that a little bit, and we had to give publishing to the guys who wrote “Toxic” for that song. It’s also about the only job I ever had, which was when I was 17. I worked for my next-door neighbor who was like an old rock ’n’ roller and hired me to do internet stuff for him because I was just a young kid who knew the internet. He just hired me to hang out, and he was just a crazy, obnoxious guy who totally would not be able to exist in today’s universe. But he literally said that to me. He told me that, “Yeah, just treat girls like shit, and they’ll stick to you—stick to the bottom of your shoe.” He literally said that, and I put that into a song, and it sings really nice in the song.

2. “Pete Wentz Is The Only Reason We’re Famous”

That’s kind of like a “fuck you” to everyone that used to talk shit about us saying that, you know, so whatever. My favorite fuck-you-ish line is in there, which is like, “You can ride to the top, but you can’t ride on my cock.” There are a lot of zingers in this whole album. It has a lot of [those], which is why I think people connected to it. It had a lot of personality, and I really did not give a shit at that time. It was fun…I’ll probably give a shit more now ’cause I’m a dad and an adult, but it’s really fun to look back at that.

What happened was we had that song, [and] we had a bunch of other songs. That was, to me, the strongest song. We were working in a studio in New York, and they’re like, “Oh, we have to cancel your session tomorrow because one of the Gossip Girls is actually coming in.” I’m like, “What?” He was like, “Yeah, we got to move you guys around.” I’m like, “I’m all right. I’ll let you cancel my session if you get her to agree to feature on one of our songs.” I said it as a joke, and it ended up becoming a reality. The best song that I had was that, and I thought it would be perfect for that. So that’s how it happened. And by the way, I was a huge Gossip Girl fan before that. It was like a joke. Kids would bring me ripped DVDs of Gossip Girl on tour so I could watch it in the bus. I was [also] on it at the very end—the last episode of last season.

It’s just like you have this outcast, troublemaker kid going for the good girl, you know? And that’s embodied with like, “Hey, we’re a Warped Tour band getting a chance to do a song with a Gossip Girl.” It was like, you know, the queen. It’s Blair Waldorf, and so yeah, I think that’s what resonated. It was charming, it was funny and it was a good song, you know?

That title was taken from a Belle And Sebastian [album], Fold Your Hands Child, You Walk Like A Peasant. I think these are the songs that kids connect to on the record. The fans really loved that song.

That’s a song I did with Patrick Stump. I didn’t do that many songs with Patrick on this album. That’s one that I did do. I hated the fucking bridge on this one. We had like a scream of rage on that. I just did not like that. That’s the one thing I would change on this record.

There’s two interesting things about “Hot Mess.” One is that we put out the album Hot Mess, and we had a song called “Hot Mess.” And then two other artists came out with “Hot Mess.” Ashley Tisdale put out a song called “Hot Mess,” and her album was called Guilty Pleasure. I remember that I publicly talked shit about her on an MTV interview, and it became beef between us. Then I saw her at a couple of awards shows, and she ran the other way. But then we made up at some point.

Then, the other thing is another band that put out a [song] called “Hot Mess” was fucking Chromeo. I’m actually boys with them, and they didn’t even know that we had put one out, and they put one out. Just another funny aside: When I started Cobra Starship, I got connected to Dave [Macklovitch] who had just started Chromeo, and we were both doing this out of the post-rock. He came more post out of more, you know, in the New York scene. It was like we are coming out of the Strokes being big and the rap stuff. And he did Chromeo, and I came out of the emo scene, and I was doing Cobra Starship, but we both wanted to do something that was more dancey and funky at a time when everything else was really purely rock. We actually got together [and] did a session because one of my first-ever artists sessions [was] where we got together, and he had a different approach of songwriting than I did, but we stayed friends through that. I actually talked to them yesterday.

7. “Living In The Sky With Diamonds”

So this song and “Hot Mess” are both songs that I worked on with Bruno Mars and Phil [Lawrence], his partner, right before Bruno blew up. [For] “Living In The Sky With Diamonds,” we wrote with this kid named Oligee who’s a fucking dope-ass producer. [Former Cobra Starship guitarist] Ryland Blackinton works with him to this day. Oliver Goldstein has a group called Oliver, which is like a super-dope electronic and a nü-disco group. He produced that, and we wrote the top with Bruno and Phil. Then, I had “Hot Mess,” and I had this chorus and concept that I tried, like, 17 different verses, and I just couldn’t get it. I went back in with Kara [DioGuardi] to try and help with the verse. She helped me with the bridge, and then Bruno and Phil came in and helped me with those verses. There’s actually a version of Bruno singing the verses on “Hot Mess” that you can find floating around the internet.

The title was inspired by one of my favorite movies, which is the guys from [sketch comedy group] the State made this movie, Wet Hot American Summer. I was a huge State fan…That’s a feel-good summer song that just worked great live.

Read more: Cobra Starship have called it a day—Gabe Saporta takes a look back

I think that’s my most personal song. I think that’s the most revealing song, and that’s a song where, for me, the whole Cobra Starship thing—everything took a toll on me. Because obviously, you know, there was a lot of—it was very—I don’t want to say drama heavy, but it felt like I was always fighting. I was either fighting the haters or fighting to break into the mainstream. Or I was getting into physical fights at the time. Like shit was wild those days, and it was fun, and it was like we were under the spotlight—under the magnifying glass, but it was starting to take a toll on me. I think that song is the first hint that it was taking a toll on me.

That was a really cool song because that’s different than anything else on the record. It’s kind of a sleeper on the record. You got to go real deep to go into it. But that song has B.o.B on it. And there’s something about that song and production [that] reminds me of [Kanye West’s] 808s & Heartbreak. We were listening to that a bunch also, so I think that one is a really unique, different song that even people who don’t even know Cobra Starship like Cobra Starship. They hear that song, and they’re like, “Oh wow, that shit’s dope.” And that’s my run through of the album. [Laughs.]

For more on Hot Mess, check out the Class of 2009 special in AP #373 with cover star Awsten Knight of Waterparks. Preorders are available here or below.