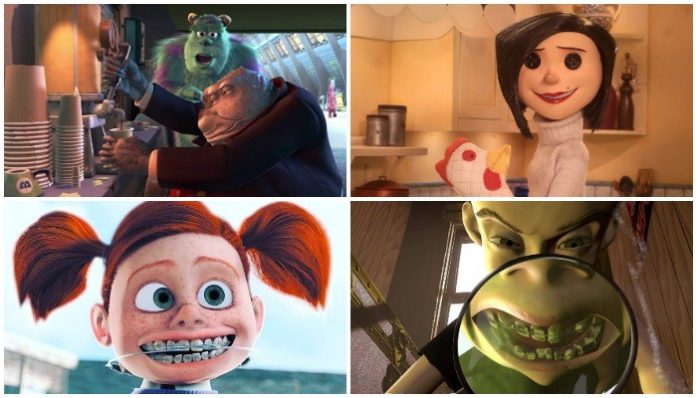 Even though animated films are meant for kids, they can have a few characters and villains who are downright creepy. Films such as Monsters, Inc., The Nightmare Before Christmas and more are filled with a few characters who make us feel uneasy.

We’ve gathered a list of 10 of the most terrifying characters from classic animated films to jog your memory about some of your favorite childhood movies that sometimes gave you the creeps. You can check out who made the list below.

Toy Story’s Sid is just the type of kid you don’t want to hang out with. He’s a bully who mutilates his toys and loves to cause destruction and terror. He has a dark bedroom filled with misfit toys that he’s destroyed, which is like a lair for some kind of monster. Sid is more than just a bully—he’s a total creep.

The Monsters, Inc. CEO has bad intentions and the creepy factor to match them. He has beady eyes, crab legs and only cares about the success of his company. He aids Randall in his evil plot, which ultimately leads to his downfall. While most people consider Randall to be the scariest character in the film, Waternoose definitely isn’t far behind.

Yzma has the dark and scary aesthetic down. She takes on the chic villain role with pride and loves to exert her power by not showing mercy to anyone. She comes up with some seriously devious techniques to try to get rid of Kuzco, which gives us a glimpse into her dark mind.

4. The Witch (Snow White And The Seven Dwarfs)

The Evil Queen from Snow White gives us the creeps as is, but when she transforms into an old hag to tempt the princess with an apple, that’s when our skin really crawls. Her voice, movements and motives as the witch are seriously unnerving, even for a kids’ movie from the ’30s. She’s the original evil witch, and that deserves some recognition.

5. The Other Mother (Coraline)

Coraline is easily one of the creepiest animated movies ever. Not only does the Other Mother sport buttons for eyes, but she’s also a horrifying, bloodthirsty spider. She gave us nightmares because she had the ability to go from seemingly perfect mom to a kidnapping, sinister monster in the blink of an eye.

No one likes Scar from The Lion King—he’s just easy to hate. He has bad intentions and just wants to watch the world burn, but not in a rebellious, fun way. He’s dark and foreboding, and you definitely wouldn’t want to get caught dead in a dark cave with him and his pack of hyenas.

Hades just looks like someone you don’t want to mess with. He’s fast talking, a bit of a loose cannon and literally has flames for hair, so he’s not exactly approachable. While he might have you fooled with his sense of humor, don’t underestimate his cruel intentions.

8. Oogie Boogie (The Nightmare Before Christmas)

Aside from all of Oogie Boogie’s shenanigans in The Nightmare Before Christmas, he’s creepy simply for the fact that he’s a sack filled with bugs. Also, any character who has the heart to kidnap Santa Claus definitely has some dark intentions.

All bugs are creepy, but Hopper is next level. Imagine seeing this bug in the corner of your room in the middle of the night. You’d probably scream. Not to mention he’s totally malicious, self-serving and downright evil, so he’s definitely a villain you don’t want to mess with.

Darla from Finding Nemo is creepy in her own way. She has a smile that makes you uneasy, and the way she will shake a living creature in a bag until it dies with no remorse is a sign of someone sociopathic. She might look like a harmless little girl, but she’s capable of a lot more than what meets the eye.