With a small discography of music to her name and the recent release of her Lip Injections collection, Elvia is creating a space that embraces natural beauty and diversity while also building a safe and wonderful life for herself, her son and her partner.

Elvia is an artist—in every sense of the word. But in addition to her bare-bones approach to creating music with her partner Idris Vicuña (professionally known as Eyedress), she’s also a dedicated mother, clothing designer, visionary and more.

With a handful of songs to her name, including “COTTON CANDY SKIES,” the gentle ballad she penned for her son, Elvia is finding inspiration in her everyday life and creating an inclusive space through her affectionate take on music as well as her recently released Lip Injections collection. While Lip Injections’ first collection drop took a minimalist approach to color palettes and design, Elvia’s intention was to create a line that showcased a perspective that was more aligned with reality versus creating a fantasy of glitz and glam. Lip Injections embodies the mindset and attitude of natural beauty, and Elvia ensured that was front and center when she launched her collection in April 2021.

Read more: Fashion loves metal, and these crossovers are all the proof you need

In her debut interview with Alternative Press, we spoke to Elvia about her influences growing up, how she embraced not fitting in with everyone else and more.

What music were you listening to growing up? How much of an influence does that stuff have on what you’re making now?

I actually moved out to Vegas fresh out of high school. The music I was listening to then was mostly anything cool that I found on SoundCloud like Lil Peep, Princess Nokia, Spooky Black and so much random Jersey club music. I think with the music I’ve put out, I definitely incorporate a lot of feeling into the songs I’ve written. I want the youth to relate like I related to artists when I was much younger.

What was the first live show you went to? How much do you remember about your first live music experience?

The first live show I went to was the Jonas Brothers in 2009 at the Staples Center. I remember my aunt surprised me with tickets for my birthday, and it was the greatest experience ever. [The] K-pop girl group Wonder Girls and Jordin Sparks opened up for them that night, and let’s just say I’ll never forget it. [Laughs.] 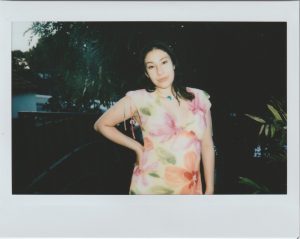 How about your room as a teenager? In those days, what posters were on your walls? Set the scene for young alternative Elvia.

As a teenager, my walls and room door were covered in magazine cutouts of so much random shit. I would buy Seventeen and Vogue magazines and cut out runway shows of Marc Jacobs and Jeremy Scott. Also, [there were] ads of cool clothing that I couldn’t afford. I just thought, “Man, one day. These look so cool.” Then I would wait for those grocery store ads and cut out the fruits that I liked most and paste them together because they looked cute and aesthetically pleasing. We got the L.A. Times delivered every Sunday morning, and I’d cut out ads for shows and art galleries I could never really go to because of my mom being pretty strict. My teenage room was a dream world. I couldn’t wait to move out and explore.

Which movies and which people influence your personal style? You have a carefree vibe, and the confidence you exude in your daily life and music really comes through. What do you attribute that to?

I loved the movie Kids growing up, and [it] had a big influence on fashion for me. It was the first time I [had] seen ringer tees on girls, and [they] looked so sick. I’m like, “Wait, this might be something.” So I’d go to Goodwill and dig through the clothes just to find extra baggy fits, and I found so many gems because all the girls were in the skinny jeans phase, but I was looking for other things that I had seen in movies.

I wouldn’t say I’m the most confident person ever, but honestly, ever since I had my baby, I’m like, “Whoa, this is the craziest, hardest thing I’ve done in life,” and it makes you feel empowered. But the key is to not really care about what others think of you. If you wanna put on a crazy outfit, do it to be different because that’s what makes you unique and not like everyone else. Fitting in is low-key boring. [Laughs.]

Your video for “COTTON CANDY SKIES” has over 120,000 views to date. Do you have plans to make a full record and release it with a label?

It was so crazy to think about because when I wrote “COTTON CANDY SKIES,” I had severe PPD [postpartum depression], and my moods were just everywhere. My son was only 4 months old, and Idris was like, “Maybe writing a song will make you feel better.” So I let the beat that he made play over and over again until I wrote some lyrics that were about my son, Boaty. I would wanna do a full record eventually. That would be so much fun. Mom life gets hectic, but when I have the time, I would wanna make a few more songs to complete an album.

We’re fans of your new brand Lip Injections—can you tell us a little about that?

Lip Injections was inspired by the early 2000s. I wanted the first collection to be fun but very minimal. That’s why it’s mostly the same pieces in a variety of colors. So the girls get to choose for whatever mood they are in. Spring colors were what we started with. I wanted the models to have a natural look because so many brands go for lots of makeup, and not many young girls see something organic. I want the youth to feel comfortable in the face they are in. They are all so beautiful. I love diversity and seeing different faces.

Which designers, fashion houses and brands most influence and inspire you creatively?

I love X-girl—the Japanese influence on clothing is truly a work of art. They can make anything, and it’s so iconic, and you get a variety of styles for every type of girl—you got the punk, the girly girl and that’s what I love so much about the brand and the background behind it.

Right now, I’m really into Heaven by Marc Jacobs. Every time there’s a new drop, I’m like, “I need this and that!” Ava [Nirui], the creative director, did such a good job on bringing back so many pieces and hiring local artists to collab on the collection. It’s culture and style all at once. It’s such a great combo for fashion.

For jewelry, I’ve been wearing By Lefty. You’ve gotta check her out. It’s beaded necklaces and bracelets made by Lefty Korine. They are so cute, and she’s such a young talented artist I love to support.