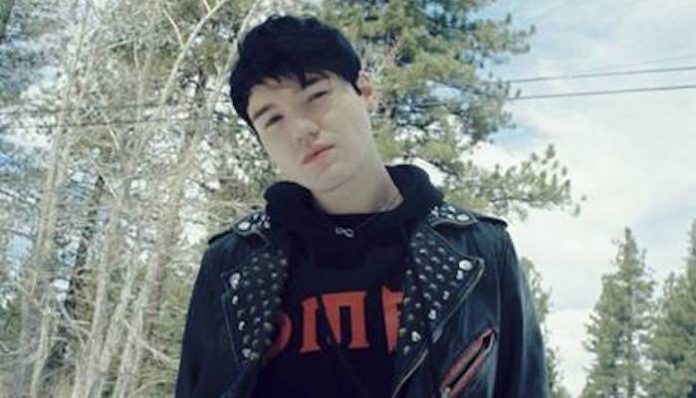 In a time dominated by genre-smearing artists looking to make the next wild and weird hit, artists can get lost in the obsession to be the most unique. Goody Grace is an artist who actually sticks out of the crowd, because he isn’t trying to.

Brandishing enough black and studded leather to play Jerry Only in a Misfits biopic, Grace literally wears his influences on his sleeve. He graduated from the school of punk rock, but now he’s fast approaching the top of alt-pop.

Like the man himself, Grace’s songs carry a charming simplicity. He’s simply telling the stories he wants to tell. Concurrent with this ethos is “Wasting Time,” which was recorded in the same manner.

“I made ‘Wasting Time’ from scratch at my grandma’s house in my hometown in Canada while I [was] visiting,” he explains. “The lyrics really just came to me about how I see a lot of people around me who lack goals and motivation, and the song is my perspective on them.”

The new music video for “Wasting Time” is a showcase of Grace’s roots. The singer wanders through rural suburbia, indifferently trudging between snow and gravestones as prodding words of motivation are conveyed through the song.

“Since I made the song in [Selkirk, Manitoba,] my hometown, I wanted the video to capture the same feeling visually as what I was seeing as I made it,” he says. “It’s very cold and snowy most of the year, so I feel I just had to show people that, who have maybe never been to Manitoba.”

Grace isn’t only impressing his flourishing fanbase through his rise to fame. He’s already worked with G-Eazy as well as fellow chilled-out troubadour gnash. He can’t say yet, but even more major-league collabs are on the way.

Despite the names among his list of features, Grace has plenty more mainstream darlings on his hit list.

“I’m very grateful to have worked with a lot of my favorite artists so far,” Grace says. “I have a lot of upcoming collaborations I can’t speak of yet, but they’ll be public very soon. Other than that, I’d really love to work with Ed Sheeran and the Lumineers on my next project. I’m a big fan of both of their work and definitely think I could make something super cool with both of them.”

With his latest video completed, the only question that remains is what’s next for the flourishing alt-pop songwriter.

“After ‘Wasting Time’ drops, I’m not slowing down,” he proclaims. “I have a lot of music and cool things on the way as well as finishing up my debut album, so expect to see me and my music everywhere within the next year and beyond.”

Check out the “Wasting Time” video below and stream the new track here.

What do you think of Goody Grace’s latest visuals? Sound off in the comments below!