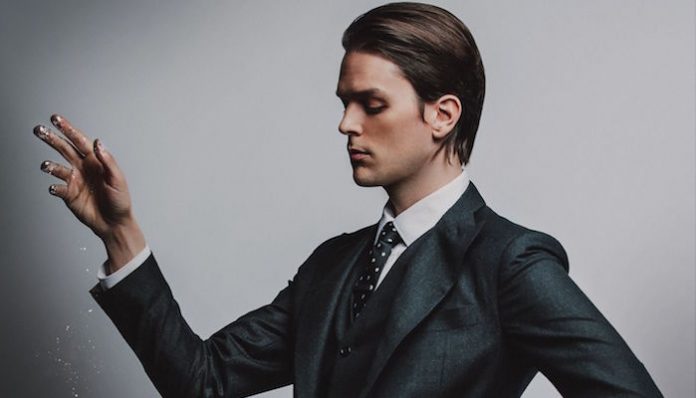 Something great is finally happening this year. Razzmatazz, the debut album from post-pop duo I DONT KNOW HOW BUT THEY FOUND ME, comes out Oct. 16. Today the band release “Leave Me Alone,” the first taste of new iDKHOW music since last Christmas. Multi-instrumentalist frontman Dallon Weekes and drummer Ryan Seaman channeled the spirits of David Bowie and Prince to create a diabolical dance-floor jam.

Razzmatazz is the full-length follow-up to iDKHOW‘s debut EP, 1981 Extended Play. That record’s mix of ’70s glam-rock affectations and pop sensibilities propelled the band into the hearts of many. The new LP’s title is a term that’s very old-school show biz, much like the origins of the word “Lollapalooza.” By using old show-business lingo, Weekes is crossing old-school glitz and glamour with contemporary futurism to create a “retro-future” of his own design.

Read more: iDKHOW are grateful for the fans who had never heard of them before

“‘Retro-futurism’ is how I’ve been describing the album aesthetics for a while now to everyone on our team,” Weekes says from the set of the song’s video shoot. “There’s something special about old technology to me. It was almost always like a living thing that you had to wrestle and fight with in order to get it to do what you want. That’s definitely been the case with getting this album to finally exist. There were a lot of hurdles, red tape and a lot of waiting. I’m glad it’s finally starting to come out.”

Weekes says Razzmatazz is a concept album further exploring the idea of iDKHOW as a bygone relic.

“The original concept for presenting iDKHOW publicly was that it was a band from 30-plus years ago that never really got their chance,” he says, “and was just forgotten about over time. I never want to do the exact same thing twice. But rather than just throw that initial idea away, I thought it would be more fun to twist it and instead pull back the curtain a little more.

“The idea now [is] that the timeline from this forgotten band doesn’t really add up when you look closely,” he continues. “And that something more sinister is going on. Which is almost certainly true with any given band or pop star you may be a fan of. You see the story they give you. It may not necessarily be the truth, but it’s something shiny to look at and listen to while they take your money. That good old-fashioned razzmatazz.”

Check out the lyric video for “Leave Me Alone” below. You can preorder and pre-save Razzmatazz here.