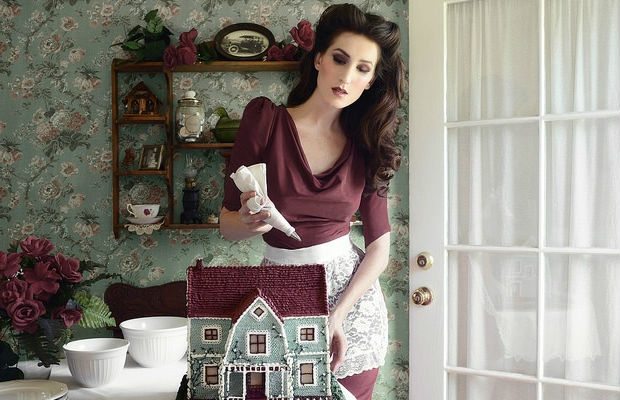 If you were to imagine a woman who bakes horror-inspired confections, Christine McConnell probably isn’t who you’d have in mind. The Los Angeles native is supermodel-tall with a head full of brunette hair that looks to be pulled straight from a Pantene commercial. She’s been known to rock a ’50s housewife-inspired dress on more than one occasion, and she’s prone to starting her sentences with “whatchamacallit.” When I tell her she forgot to email me her photos, her adorable response is, “Oh, crackers!” Let’s face it: The woman is as sweet as apple pie. Or perhaps, in the case of McConnell, she’s as sweet as a giant Alien-inspired facehugger monster sugar cookie.

The professional photographer-turned-amateur baker started gaining attention in July when pictures of her creepy-crawly sweets began making their way around the web. She now has more than 100,000 Instagram followers and is currently fielding offers from book publishers and TV production companies. While McConnell’s deliciously scary creations are the main attraction—an eerie coiled snake covered in stark white frosting; waffle cones with chocolate tentacles and gnashing berry monsters; a monstrous cake featuring Danzig’s famous skull logo, dotted with “melting” candles—her DIY back story is just as interesting. (Besides photographing her kitchen creations, the self-taught photographer also stages her own photo shoots, making the clothes she wears in them and constructing the backdrops.) AP spoke to the baker about her favorite Tim Burton movies, being fearless in the kitchen and getting the nod of approval from Danzig.

How did you start baking?
CHRISTINE McCONNELL: I started baking cookies when I was a teenager just for fun. Then, probably two years ago, I started getting a little more artsy and crafty with the cookies. I think I started with gingerbread cookies that were kind of funny looking, like a little provocative. And then I just started messing with making them creepier. It just took off from there, and they’ve become so popular. I actually really love doing it, so I think it’s gonna be my thing now.

Most people start learning to bake by making cupcakes or cookies, but you’re like, “I decided to make waffle cones!” and it turned into something else completely.
[Laughs.] I had no intention of ever making them bizarre; I just started making them. You can bend [the cones] any which way, and after you’ve waited a couple seconds they freeze. I made all these waffle cones, and then I was like, “Well, what if I filled them with custard and made a trifle?” Then I started making tentacles, and I was like, “Well I could probably make little monster faces on the strawberries.” And before you know it! That’s usually how a lot of the projects would go. I never really know what’s happening until it’s happening. Determining when you’re going to stop is the trickiest part.

What inspired you to take these desserts and make them dark and spooky?
I was really moved by that scene in Edward Scissorhands where this inventor is making these cookies that are actually pretty benign, but he’s making them in this weird, spooky, cool factory. I just loved the combination of the creepiness and having a sweet dessert. And I’m kind of a sugar addict. I love things that are morbid. It’s just the most fun combination I can think of.

It’s funny that you mention Edward Scissorhands because many of the articles about you describe you as a “pin-up girl meets Tim Burton.”
I’ve seen that. Tim Burton is my idol. If somebody were to be like, “If you could meet anybody,” I’m sure it would be Tim Burton. I feel like a knockoff of him, personally. He’s so incredible, and I feel so incredibly inspired by him all the time. That’s such a disarming compliment when I hear that.

I have to ask about the Danzig cake. It looks amazing.
Thank you. That’s a riot. My brother had shown me a picture of this really silly Danzig cake somebody had done, and my concept is very similar. It’s just a circular chocolate cake with the Danzig skull on it. My intention was initially just to make a circular chocolate cake with a really good skull in the middle. And then I was like, “Well wouldn’t it be cool if I crushed up Oreos and it looked like gravel around the cake?” So I did that, and then I was like, “Well, I can probably sculpt little skulls and bones out of the fondant.” So I made fondant and did that, and that went surprisingly well. And then  the candles are actually regular birthday candles that I’ve dipped over and over in melted paraffin wax and shaped into that horn shape, and then I rolled them in cinnamon and nutmeg to give them a grimy look. Once you lit it up—and I’m telling you the pictures don’t even do it justice to how cool that thing looked in person.

Something else that caught my eye is the photography. A lot of people take a picture of their food and just post it on Instagram, but your photos are beautifully laid out, and your vision is really clear.
I’m very aesthetically driven, so to me it’s paramount to almost anything. If you’re going to take a picture of something, make a cool backdrop for it and make sure the lighting is going to maximize what you can do with how it’s going to look in the image. Obviously when you’re dealing with baked goods, it’s not a permanent thing; it’s gonna be gone. So the only thing you have to remember it by is an image. I would prefer to make images that are worth looking at later. I do everything. I build all the sets, I make all the clothes. I don’t use patterns for anything. I do it all on the cheap. I’m going to estate sales and going to Home Depot and finding weird things. A bunch of my photography lighting is all just janky stuff I’ve put together from Home Depot.

When you started baking were your friends and family surprised at all, or were they like, “That makes sense”?
I’ve always been pretty weird. When I was a teenager, I used to ask if I could have a coffin for a bed, because I’ve always been really fascinated with things that are sort of morbid. My parents have this big, old, creepy house, and I always wanted my bedroom up in the attic where it was unfinished and creepy.

Did you ever get the coffin?
No! It still sounds kind of cool to me. I don’t even know where I got that idea from. I think when I was little, I wanted to either grow up to be a mermaid, Catwoman or Dracula. So if that gives you some perspective of what a weird little kid I was.

Have you started getting requests from people to make special things?
I won’t say I get a lot of requests from family and friends. The coolest thing, someone who is actually Glenn Danzig’s assistant emailed me and said he was going to show the cake to him. I guess he did show it to him, and he thought it was super-duper cool, which is, like, the coolest thing ever. I love Danzig, and it’s amazing to have your work seen by him just because you put it on the internet. 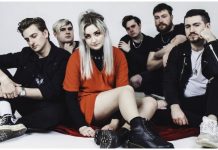