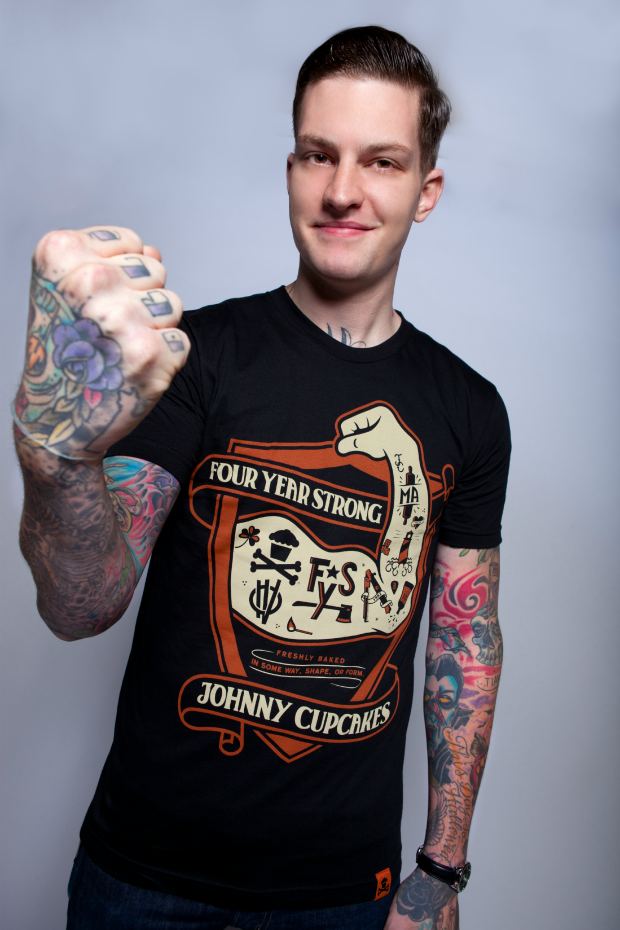 If you’re not familiar with Johnny Cupcakes, you’re missing out. No, it’s not some new dessert spot in L.A.—although there is a store on the infamous Melrose Avenue, complete with a wall of smoking ovens. With their signature skull and crossbones cupcake logo, Johnny Cupcakes happens to be one of the cutest-with-an-edge clothing and accessories lines around. And Johnny Earle, a straight-edge college drop-out who used the time his peers spent partying to brainstorm and sketch up ideas, started it all out of the back of his ‘89 Toyota Camry.

Johnny Cupcakes’ latest endeavor is a limited edition tee with Four Year Strong to celebrate their latest album, In Some Way, Shape or Form, limited to 400 and due out December 8. We were lucky enough to chat with Johnny a few nights before the huge Johnny Cupcakes x Four Year Strong and SJC Drums party in Boston (stay tuned for pics of that later this week). Read on for more about the collaboration, magic tricks, and salt and vinegar potato chip flavored milk. Yeah, really.

So how exactly did the Four Year Strong collaboration come about?
Both of us being from Massachusetts and having loads of friends in the same circle, we’ve been connected somehow for years. We had mutual respect for one another, and began talking more and doing photo shoots, and a few light bulbs went off. Danny Poulin, who’s been smashing together some great marketing projects at JC, was the head captain of facilitating this collaboration.

A handful of us had various concepts that we tossed around collectively—mostly involving facial hair. [Laughs.] We ended up deciding on a style that was a bit more classic, combining imagery and references from both of us (the band and JC), as well as our lovely state of Massachusetts. Our head designer, Chris Delorenzo, put the final ideas and design into the oven. No, really, he put it in an oven and we had to start all over.

What was it like working with friends on this collaboration? Did it make it easier or harder?
It was a little difficult at first, because we wanted to execute it in the right way. Rather than just printing a t-shirt and releasing a ton of them, we decided on printing only 400 shirts, while exclusively selling them through JohnnyCupcakes.com on Thursday December 8th.

To top it off, we’re holding a private celebration—which includes Four Year Strong, the Johnny Cupcakes brand, and our friends at SJC Drums. All of us are from Massachusetts, have DIY work ethics and have been creating for the past 10+ years. We wanted to give back to Massachusetts, so we’re working together to create and auction off some custom drum supplies with the shirts artwork. All proceeds will benefit The Greater Boston Food Bank. The auction will go live on the Johnny Cupcakes eBay Vault this Thursday, December 8th.

One of the best collaborations I’ve seen has been between Ghostbusters and Hi-C juice boxes. I’ll never forget the Ecto Cooler.

What does the future hold for Johnny Cupcakes?
We’re always working on new product and projects. Some are so secret that we’ve had to sign legal documents to not let anything slip. But rest assured, they’ll be projects that are worth the wait.

Each of our store locations (in Hull, MA; Boston; L.A.; and London) have many of their own in-store exclusive t-shirts. And if you don’t know already, we do not sell our products to any other shops. People like what nobody else has, so I’ve always made sure to keep our products limited and exclusive. Doing this has helped tremendously with building the brand and it’s worldwide community. A good example of witnessing this friendly community has been our Facebook fanpage.

We’ve done and plan on doing more pop-up shops (very temporary retail spots). Last year we drove our van across the country and opened up one-day Johnny Cupcakes shops in 31 different cities. You could only purchase exclusive merchandise at these shops. On YouTube we released a video for every stop on the Johnny Cupcakes Suitcase Tour—definitely take a look if you have time.

As far as other upcoming events go, I have some local, national, and international lectures coming up. In January I’ll be in Hawaii talking to the island about entrepreneurship and how to start a unique company or project with little to no start-up costs. I say unique because almost everything has been done before—which makes it a bit difficult and scary to start a company.

When I started Johnny Cupcakes 10+ years ago, people thought I was crazy. Nobody was putting images of food on t-shirts at that time. Even though this might seem crazy to people, it was original and different. With enough time, dedication and work ethic, it became a full time job and I was able to employ my friends and family. (Continued on Page 2…)