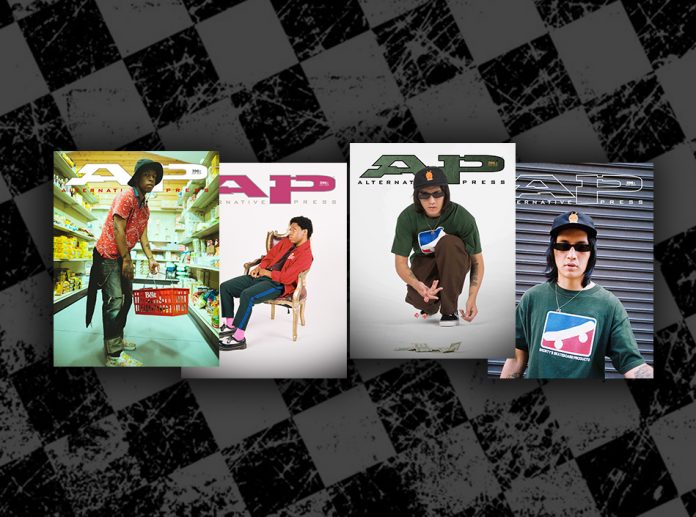 After more than a year devoid of live performances, with countless album and project delays, there’s no doubt that 2021 has delivered some exciting releases.

Making his Alternative Press cover debut shortly after releasing his latest eight-track project, SURVIVORS GUILT: THE MIXTAPE//, alongside blink-182’s Travis Barker, KennyHoopla is breaking ground for the next generation of pop punk, alternative and more. In an all-new interview with Michael Penn II, Kenny dives into redefining what being a “rock star” means today.

“I feel like [being a] ‘rock star’ is a more-than-life thing where it’s narcissistic and self-absorbed and not empathetic,” Kenny says. “And that’s what I’m saying is fucking not me. So, if we’re gonna call ourselves rock stars—if y’all are gonna just fucking dye your hair and go over a trap beat and call yourself a rock star—then I’m about to do whatever I can to push that in the right direction in this generation. A rock star to me? The people decide that for you. You can’t label yourself. That’s something you have to earn.”

Additionally, Kenny discusses how life in Wisconsin actively influences his energy, the differences between his first two projects, protecting himself while also being open to his audience and more. Aside from an all-new interview with Penn, KennyHoopla’s debut cover also features a brand-new photo shoot with Brock Fetch.

Also making his Alternative Press cover debut, Eyedress is gearing up for his next full-length release. The Filipino artist’s fourth studio album, Mulholland Drive, will arrive Aug. 27 via Lex Records.

“I can’t wait for you all to hear my new album, Mulholland Drive,” Eyedress tells AltPress. “I tried to put something in there for everyone. Big thanks to everyone [who] helped me make this album in such a short amount of time and love to all the featured artists that decided to be a part of this album. It’s definitely going to be special having worked with people I really respect and look up to. The album has 15 songs and is not bound by one genre, as usual. I had to stick to code and give the fans that variety.”

Eyedress shines on his debut Alternative Press cover, also shot by Fetch, and discusses his forthcoming album in an all-new interview.

Issue 396 also features a variety of artists from all walks of life putting their talent on full display. Hot off the release of his latest project, never knows best, boyband connects with Good Charlotte’s Billy Martin to discuss how the two first met, their shared love for music and more. Alternative Press also spoke with emerging artist Benét on their upcoming EP, Game Over, set to drop Aug. 6, delved into the Maine’s latest release, XOXO: From Love & Anxiety In Real Time, and plenty more. As you can expect each month, Issue 396 has no shortage of discovery, new music, in-depth interviews, new photos and more.

You can get Issue 396 featuring KennyHoopla and Eyedress here or below, available now.