Kurt Cobain was as cool as you expected him to be

Ahead of the 30th anniversary of Nirvana’s debut album ‘Bleach,’ this weekend, we revisit a time when Kurt Cobain was just a regular band guy long before the icon status and tragedy took him from us.

Michael LaVella has been an active participant in America’s underground music scene most of his life. Starting as a member of Pittsburgh’s first hardcore bands (Real Enemy, Half Life), LaVella moved to the Bay Area in the late ’80s to assist with the crucial punk zine Maximum Rocknroll, work for the label Man’s Ruin and start the well-respected fanzine/record label Gearhead. (You like Swedish rock mainstays the Hives and the Hellacopters? Thank him for releasing their records in this country first.)

LaVella is a rock lifer, seemingly at the right place at the right time as history was happening. To commemorate the 30th anniversary of Bleach this weekend, the debut album from alt-rock titans Nirvana, we asked him if he had any interesting stories about the time period and the amount of excitement surrounding the pioneering Seattle label Sub Pop and its attendant roster. This is what we shared with us: A story of Kurt Cobain selling his own merch and letting the unsuspecting crowd in attendance know what was coming next.

It was June 22, 1989, only a week after Bleach was released, when I saw Nirvana at the Covered Wagon Saloon in San Francisco. They were opening for Bad Mutha Goose, a Texas funk band featuring the already legendary Tim Kerr—of Big Boys and Poison 13 fame—the latter often referenced by the early grunge bands as hugely influential (so much so, Sub Pop eventually reissued their entire catalog on one tidy CD).

Bad Mutha had been playing regularly in the Bay Area and had built up quite a following, so the place was packed. During the opening band’s set (local skate/hard-rock band Spiderbaby), Kurt Cobain himself was working the Nirvana merch stand, which consisted of one small table in the front room where the venue’s long bar was. I approached him with an outstretched hand and a big smile. 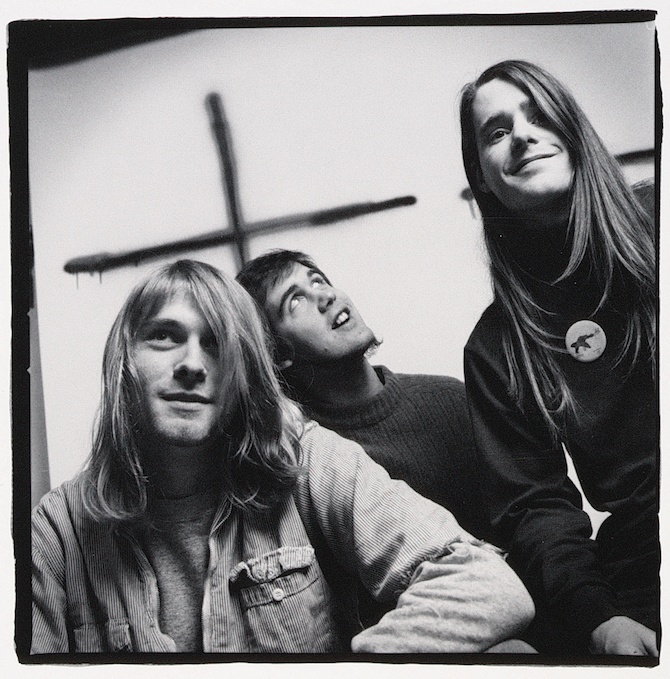 I had met Kurt Cobain, bassist Krist Novoselic and drummer Chad Channing before, and we were pretty chummy. I had been writing for Maximum Rocknroll for about a year, during which time the second piece I ever did for them was an interview with Sub Pop label founders Bruce Pavitt and Jonathan Poneman, which cemented my status there as “the grunge guy.”

Indeed, I was an early champion of Soundgarden and Mudhoney and was always given the task of reviewing “this new noisy stuff” that editor Tim Yohannan (RIP) could never quite get his head around. I volunteered to take on everything coming out on key underground labels such as Sub Pop, Amphetamine Reptile and Touch And Go. He seemed very happy to put those records into my review pile each month.

I must assume that was the reason Kurt was so happy to lay a copy of Bleach on me. I clearly remember him asking me if I wanted a first pressing on white vinyl or a second pressing that came with a poster. Before I could answer, he said, “Hang on” and pulled a poster out of a second pressing and put it into one of the white vinyl copies and handed it to me. “There you go, super-special edition.” Why I didn’t have him autograph it—especially considering that I used to get everyone to sign everything—remains one of the great mysteries of my life.

But Kurt was so down to earth and friendly, much like his buddies the Melvins (who themselves had recently migrated to San Francisco), I just assumed he’d be around forever. It might seem hard for a young person to believe, but I wasn’t hanging out with a rock star that day. Kurt was a normal, flannel-clad, shaggy-haired rock ’n’ roller and very unpretentious to boot. I was happy that they got an LP out, and [I was] excited to see them play. 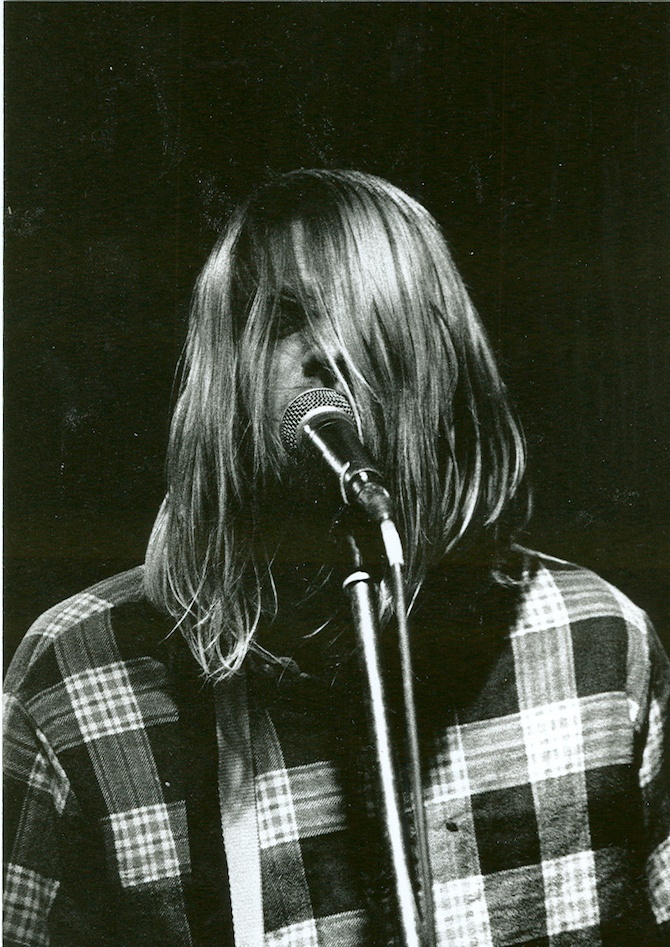 I stood front-row center when the band took the low stage, close enough to pick up Kurt’s mic stand the couple of times he knocked it over during the show. Chad and Krist came out first, followed by Kurt and…some other guy! During our earlier conversation, Kurt failed to tell me that Jason Everman had joined the band, and when he plugged in, it made an instant impact on their sound.

They started chugging through the Bleach material, much of which I was hearing for the first time, as the only two songs they had released up to that point were on the “Love Buzz” seven-inch. The famously subdued San Francisco crowd was actually pretty energetic (nothing like the later hysteria of course), with lots of jumping around and fists pumping along with riff-heavy jams such as “Negative Creep” and “Scoff.”

Somewhere in the middle of the set, something quite remarkable happened. I can remember with amazing clarity seeing Kurt’s foot turn off his distortion pedal as the clean-sounding guitar riff to “About A Girl” began. It was my first time hearing it, and I was blown away.

Only one time before (while seeing Hüsker Dü years earlier at the Electric Banana in my hometown of Pittsburgh) did I have this feeling—like a light bulb going off over my head in a cartoon—where I thought, “This is genius. These guys could actually make it.” It’s only happened one time since, while seeing the Hives in Sweden in 2000. (That time, I was actually in a position to do something more than write a glowing review, but that’s another story for later.) 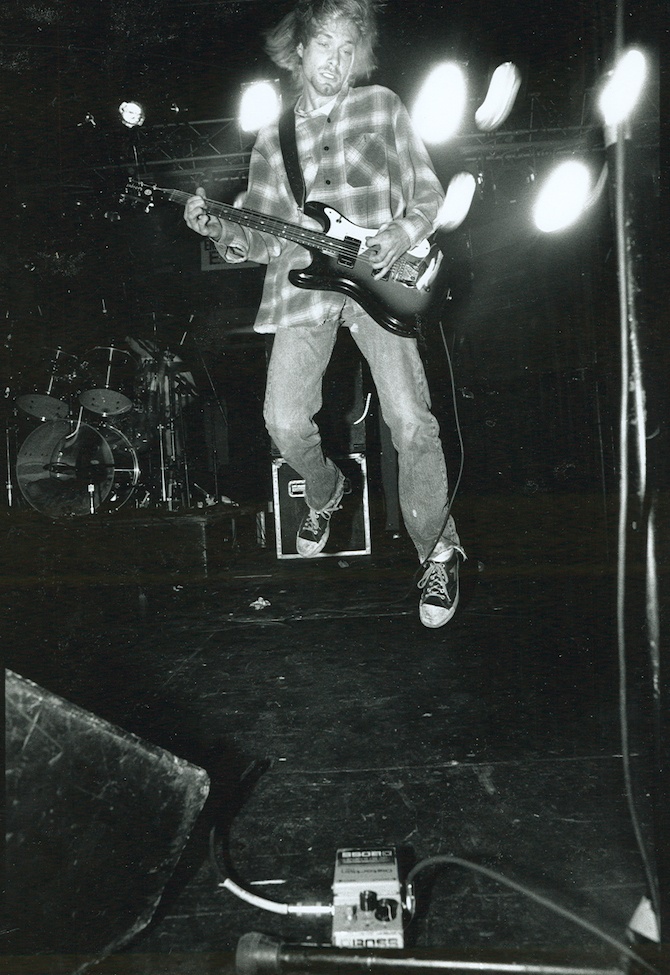 At any rate, I knew I was both seeing and hearing something special that day, and with the 30th anniversary of Bleach now upon us, I was certainly proven right. Nirvana broke out less than two years later in spectacular fashion, and while I was happy for them, in keeping with the punk ethos, I stopped going to see them when the venues got too large. I did catch them a few more times though, and they always put on a wonderfully unpredictable show.

For me, Chad is the only Nirvana drummer. I never saw them with Dave Grohl pounding the skins. (Which is funny because that’s my story with Scream, as well; I only saw them with their original drummer Kent [Stax]. By the time old Dave shows up in a band, it’s pretty certain that I’ve already moved on.)

While it’s common knowledge that it was Jason Everman who famously paid the $600 to record Bleach, it should be noted that it was Kevin Plamondon—Frank Kozik’s business partner who later hired me to work at Man’s Ruin Records—who lent Sub Pop the money to actually press it up.

In his own stroke of genius, Plamondon decided to take a percentage point on the record rather than be paid back. Sometime around 1995, I saw one of the royalty checks Sub Pop sent him. Let’s just say that he made a very good decision taking a chance on these unknown kids from Aberdeen, Washington.