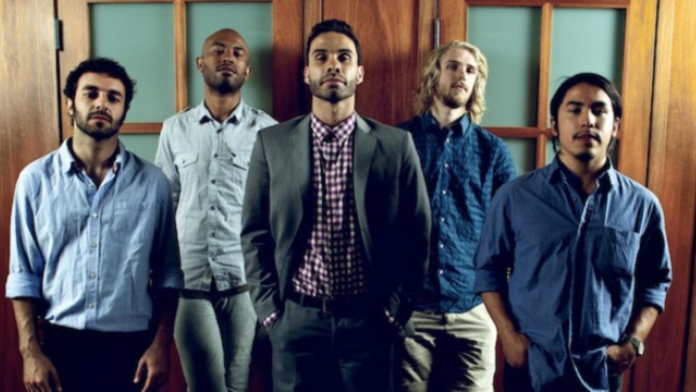 You know Jason Butler as the pulse-raising frontman of FEVER 333. But prior to that, he fronted letlive., the band who truly stuck out of the post-hardcore scene. Tragic Hero Records has released the band’s demos for their Fake History album on a special limited-edition vinyl format.

The double-album set is a document of a period that’s crucial to Butler’s artistic and political development. It’s conventional wisdom that when an artist achieves a certain level of success, listeners want to revisit their history. What’s different about the Fake History demos reissue is that it’s made from a labor of love and fan service.

Butler spoke to AltPress about his intentions with the letlive. reissue. Unlike artists who gain success and then disparage their old works for whatever reason, Butler’s take is much different. In high contrast, he prefers to celebrate letlive., not bury it.

Do the demos for Fake History carry legendary status among fans? Was there a great demand to get them out into the physical world?

JASON BUTLER: People are asking questions about “the 10-year return” or a tour or this, that or the other. I don’t believe in that for a myriad of reasons. I just wanted to give people something they could sink their teeth into, hold onto and invest in. That is different than just a remaster of the album. Also, you give people another insight into what letlive. are and were without going into the details of how we ended. I’d rather talk about the beginnings and what lies beneath, like the roots or the foundation, rather than the end of it.

You released these tracks earlier this year on Bandcamp. And the response to that was significant enough that you felt it needed a proper physical release?

Yeah, a lot of people were interested. I was quite surprised, actually. I got together with Tragic Hero, the original label that believed in me and the boys, and released that first Fake History album in 2010. We made vinyl just so people can have some sort of physical representation of a time in their life or a piece of work that they really, I guess, believed in or still believe in. And vinyl is cool. In an age of MP3 and streaming, vinyl seems to have held its status as something people still want. So I wanted to do that with these songs.

Was the process of putting this together a time machine or a heavy cringe factor? Because a lot of artists look at their old works and feel like they’re looking at baby pictures.

Nah, you know me, man. I’ve upheld the same frame of mind and relative understanding of who I am, what I am and why. I’ve got a real strong sense of fondness when I look back at those demos. When I listen to them, I think about where we were and what we know, our aspirations and our ambitions and what we believed in.

And well, look at my life, man. I was in a really, really crazy place in my life where I was sort of at sea, if you will, just trying to figure it all out. The only thing that made sense to me was to talk about it through art. When I look at that now, of course,  I’m an exponentially better songwriter. I’m a much better singer. Now, I might do things differently. But that doesn’t change at all how I felt when I did it. I was very, very committed and invested and believed heavily in the things that we’re doing at that time. I was really excited and really omnivorous and open to taking these risks. It really painted the picture for my future.

To be completely honest with you, I really don’t do much of the time machine reminiscing, like break out the old photo books. I don’t really do that in my life. So [the label] asked me to do that. I was collecting a bunch of photos from my best friend and people that [we] were on tour with at the time or were there when we were making those demos. It was really nice to return today and remember what it felt like then. That’s why I’ve got no element of cringe whatsoever. Actually, I look at those things quite fondly.

Every time I saw letlive., it was a legendary thing. You were always constantly in motion. I was always amazed by people who would always say they were “going to bring their A-game.” And then when they’d follow letlive., I’m like, “Nah dude, you’re boring.” I never got bored at a letlive. gig.

Thank you, Jason. I think a lot of what I was going through in my own personal life—like my emotional and physical self—was a sense of catharsis. Obviously, it’s what we all say as artists usually. But there’s also a challenge in it. And [there was] a confronting element to it all for me, where I had to really challenge myself every night to be the person I said that I wanted to be emotionally and physically. I think that was really, really well represented in that time. There were times I was seen as pretty erratic. Sometimes I seemed deeply emotional. Other times I seemed completely callous. I think that was on this ever-evolving spectrum of who I was at the time.

letlive. didn’t seem like a band. It looked more like a gang where everybody had each other’s back.

That’s the thing, man. Despite obviously the decomposing or the deterioration of letlive. That’s a really good way to put it: When it came to the performance and the art, it was like nothing could get in the way. Nothing between us personally. Nothing outside came inside. It was all about the band at that moment. And I really have to give it up to everyone throughout every iteration of letlive., really.

For those who know me, I’m extremely obsessive. I am delusional and ambitious. Having people, like you said, riding for each other like a gang? Despite whatever happened in the end or whatever was happening at that time outside of actually playing the show and writing music? I cannot ever let that affect how much I appreciate people riding for me and with me through those times. Absolutely.

One more thing: The first 10 readers to retweet this interview will receive a hand-signed letlive. poster from Jason Aalon Butler.