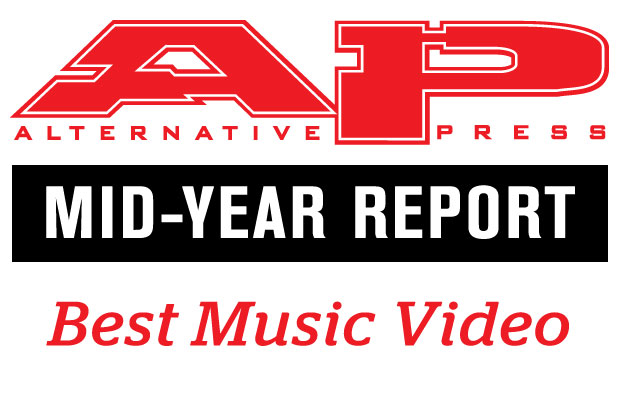 “It's so bright, 1980s-inspired and fits the song perfectly.” –Imogen Butcher

“The perfect balance of creative, funny, cheesy and cute. You can almost see a little bit of Ted Mosby [How I Met Your Mother] in Brian (lead singer) as he goes on a journey to find his dream girl.” –Tanvi B

How did Falling In Reverse get more than three million fans to watch the video for “Alone?” If the stalemate of the thumbs-up-to-thumbs-down ratio on YouTube is scientific evidence, they didn't. They just made the most ridiculous video out, inspiring countless “grown-ass men” to make sure their roommates wouldn't see them enjoying it. Dramatic helicopter drop-offs not seen since Platoon, ghost riding the Lambo (with a passenger seemingly protecting the rental fee), Ronnie's tyrannical stage mosh, a vintage microphone worthy of a modern crooner, a belated (or fashionably late?) Charlie Sheen reference. Lyrically, it's a shit-talker’s dream of hostility and lack of compassion, until the chorus brings a change in heart that sounds like it's jacked from Eighteen Visions' James Hart. It's all there, like a Where's Waldo? of absurdity. Now if you'll excuse me, I have to go for a run in my Gucci sneaks. –Brian Kraus, Weekend Web Editor

IN HEARTS WAKE – “LORELEY (THE LOVERS)”

We debuted the video “Loreley (The Lovers)” by one of our 100 Bands You Need To Know, In Hearts Wake in January, and it has remained the most visually stunning clip I’ve watched since. And, as the one who keeps her eyes on the news feeds and watches a lot of videos as a result, that’s saying something. The beautiful scenery surrounding the story’s Tarot-inspired narrative looks like something out of a fairy tale. Or Australia. (One of those two.) ­­–Cassie Whitt­, Web Content Manager

PARAMORE, “STILL INTO YOU”

The first time I heard Paramore—which was shortly after “Now” was released but before a single note of any other song had gotten out publicly—I was immediately drawn to “Still Into You,” with its quirky instrumentation, song structure and absolutely adorable lyrics. At the time, Paramore's second single had yet to be selected, and I told everyone associated with the band, from the album's producer to the band members themselves, that this song had to be it. I highly doubt I'm singularly responsible for “Still into You” getting the video treatment, but I'm glad my instinct was right, and that the video turned out so drastically different from every other video in Paramore's canon. It's a three-and-a-half-minute sugar rush with compelling visuals (which is a fancy way of saying they set off fireworks, rode BMX bikes, did some high-art dancing and I was thoroughly entertained). –Scott Heisel, Managing Editor

The follow-up to the Columbus duo's ambitious “Guns For Hands” video is both slightly disturbing and overtly celebratory. On the chilling side, frontman Tyler Joseph looks particularly distraught in a public men's room, reciting the lyrics before pulling out an electric razor, shaving his skull (not quite De Niro in Taxi Driver, but still disconcerting) and donning a white ski mask. Not sure how the band (and video team/creative foil Reel Bear Media) got an entire sold-out arena to stand perfectly still before igniting the rave switch; I'm going to chalk it up to the amount of craft and charisma the Pilots put out there, the kind of charm that would make fans follow the band into a missile silo. Another amazing artifact from a band who have more great ideas than reservations. –Jason Pettigrew, Editor In Chief

ALLISON WEISS – “MAKING IT UP”

Getting dumped sucks, and there are a million and one songs out there that tell you just how much it sucks. Thank goodness we have Allison Weiss, who was able to take something as personal as dealing with a breakup and turn it into a cute and funny music video about dealing with a breakup—only this time she is dumped by her dog, Scott. And did that hound dog have the guts to tell Allison to her face? No! He did it with a note: “I can’t do this. I’m sorry.” (Did this remind anyone else of the Sex And The City episode when Carrie gets dumped through a Post-it?) I don’t have a dog, but after watching this video, I’m thankful I’ve remained pet-free for my life. I don’t think I could handle getting dumped by my dog. Seriously Allison, you’re better off without him. –Brittany Moseley, Associate Editor