The world told MOD SUN he couldn’t sing, so he proved them wrong

Internet may have killed the rockstar, but Derek Smith still believes great things are coming.

MOD SUN will be the first to tell you that he’s not into “preaching” and a stereotypical “you can do it” mentality. Born as Derek Smith, the vocalist takes full responsibility for his losses and triumphs but is an adamant believer in not giving up on hope and faith. It’s that passion that drove him to eventually become a singer. Now on the verge of dropping his next album, Internet Killed The Rockstar, even more of Smith’s dreams are coming true.

The road to the final product was an eventful one. It’s not every day Machine Gun Kelly kicking out the windshield of your car leads scene icon Avril Lavigne to follow you on Instagram. She and Smith later struck up some conversations, which eventually led to the creation of “Flames” with producer John Feldmann. MOD SUN is a rock star in his own right, but he says working with Lavigne was truly something else entirely.

“I can’t even take credit for how amazingly all these things connected,” Smith says. “She did this out of the kindness of her heart… She’s a true icon, and it’s also turned out to be the biggest turning point in my career.”

Despite how some may have discouraged him in the past, Smith has never given up on achieving his goals. While he believes the internet really did kill the rock star image and idea, it hasn’t stopped him from living his life as an artist, and he’s encouraging others to do the same.

“You’re not selfish for putting yourself at the top of your list and saying, ‘I want a great movie at the end of my life,’” Smith says. “I don’t want a sad movie. I want all of it; I want sad moments; I want happy moments; I want strength; I want fear. I want it all in my movie, and I’m out here to create that.” 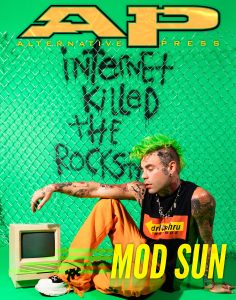 Let’s take it back a few years. You began your music career as the drummer for post-hardcore outfit Four Letter Lie. Later, you moved on to Scary Kids Scaring Kids until you disbanded. How did those experiences pave the way for what you’re producing today?

In the most simplest terms, the work ethic that goes into being a band in those days—getting in a 15-passenger van, playing shows for no money, going around this country with no one knowing who you are—is ingrained in me. Musically, it’s really funny because I didn’t know if I ever saw this coming, but I feel like I listen to my songs, and it’s a complete embodiment of what I was doing from 16 to 21. In Scary Kids Scaring Kids, that was the epitome of post-hardcore music. Before that, I was in a total pop-punk band. We wanted to be on Drive-Thru Records. That’s all we wanted. Literally, hand to God, my first goal in music was to be signed to Drive-Thru Records and tour with the Starting Line or something. That was it. I took a very hard detour to get to where I’m at now, in the last 10 years making all this different kind of music, and I feel like now I’ve really brought the youth in me. I hear my youth in my music.

When you first embarked on your solo journey, you dropped a series of hip-hop mixtapes. From there, your sound has progressed to include punk-rock influences. What drove this change?

I can pinpoint finding my voice… I grew up wanting to be the person who wrote all my favorite songs. I would sing back a song in my car, by myself, and in my head would say, “I wish I did that. I wish I said that!” I always had these things to say, but at a young age, I was told by other members of my band, even by family members, “You can’t sing.”

I related really heavily to this poem that Charles Bukowski wrote, and he said, “We all have this bird inside of us that’s dying to sing.” In this case, he was talking about how we suffocate it with smoke, we drown it with alcohol and we do everything we can to get that bird to shut up. But still, when you lay alone at night, you hear that bird trying to sing. Truly, maybe reading that poem actually affected me even heavier than I even thought until this moment. But I’ll never forget being alone in my studio and saying, “That’s it. I’m going to sing today. I’m going to do it.”

Whenever I hear the LP title, I can’t help but think of the Buggles’ ’80s hit “Video Killed The Radio Star.” Do you think we’re experiencing something similar now but with streaming services and the internet?

I saw the insane shift happen. Like when you had to be in the room with your four friends to make music. I saw that turn into, “You can turn on a computer and become a one-man band.” I came from bands that used to have to demo an entire album. This is what you did back in the day: You would literally make the whole album with your band, go to some dude in town, record it all, send it to your label [and] your label would say yes or no. If they said yes, then you get sent for a month to go record your album. It was a year-long process… What I saw was the idea of music being here today and gone tomorrow. It became all about content over quality. We all know the best art is created out of moments that aren’t superficial. We all know the best art is made when you don’t even know you’re making the best art.

I was in a dream driving in my Ford Explorer at 16 years old by myself. I snuck out of the house, not to go fucking spray-paint the side of a building or go meet up with a girl. No, so I could go ride around my city and scream the lyrics of a song and pretend that it was my song. That’s literally what I did as a kid. The song that was playing was “Internet Killed the Rockstar.”

It painted the story of when the kid inside me essentially died and turned into a person that was living in a new age. I grew up quickly, but I’ve remained able to be in touch with this childlike sense inside me. [The song] is my tribute to the kid who literally thought he was never going to make it. And guess what? You made it! You made it.

One track that’s especially emotional is “Smith.” Can you give some detail as to who it’s written for, and what inspired the backtrack for the song?

It starts with this amazing little voice intro of me, which is basically laying it out for you right there that this is a tribute to my father. His favorite thing and quote in life was by the guitar player from this band called the Band, and his name was [Jaime Royal] “Robbie” Robertson. There’s this amazing movie called The Last Waltz—this was the Band’s last show they ever played. My dad just got such a kick out of the fact that Robertson came up to the mic, looked at everyone and he said, “Goodnight. Goodbye,” and he never stepped foot onstage again. My dad thought that was the coolest way to go out.

What do you want your listeners to take away from not just your music but MOD SUN as a whole?

You are an artist. Art is so much deeper than what you end up hearing, what you ended up seeing or what’s captured in a movie. A lot of the art is the making of what you’re doing. You can make your life look like art, you can make your life feel like art [and] you can make every step you take feel like a brushstroke. Believe that there are bigger things going on that are on your side because you’re proving to them every day that you are worthy. I just want them to understand [that] these aren’t just songs, not just paintings, not just words. It’s a feeling that you can keep within you, and no one can take [it] from you.