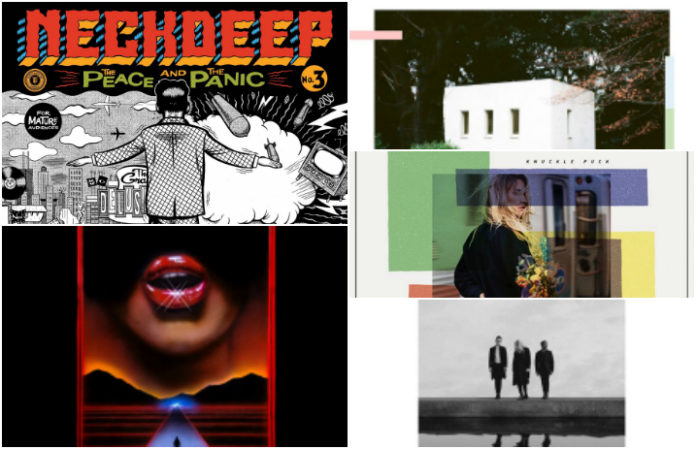 So far, we’ve brought you the best songs and albums of the first half of 2017. Now we’re looking ahead to the 13 records you need to keep an eye out for during the rest of the year. You do not want to sleep on these LPs.

Read more: Top 5 most anticipated albums of the rest of 2017, chosen by you

Any Circa Survive fan will tell you that there's more to the band than their instantly recognizable sound; there's also the impressive longevity and a meticulous work ethic that goes into their art and themes. The band's sixth LP boasts a somehow further perfected Circa Survive brand of rock with Anthony Green's beloved vocals soaring or sailing over a foundation of airy, post-rock epics, inventive grooves and compelling poetry. It's a comprehensive journey of sonic bits and pieces gathered from everything from Juturna to Descensus.—Brian Leak

Hardcore legends Converge are working on their ninth album, title TBD. They're keeping everything about the new album pretty hush hush, but if it sounds anything like the 7-inch EP they released in July, the brutal and melodic “I Can Tell You About Pain/Eve,” then we'll be stoked on it.—Kelsey Shawgo

Counterparts – You’re Not You Anymore – Sept. 22

Counterparts have a knack for making heavy beautiful, and their impending third full-length release does exactly that. Mark your calendars for Sept. 22, and write yourself a reminder to check out You’re Not You Anymore because this is the album melodic hardcore needs right now. —Rabab Al-Sharif

Think you’ve got “punk” figured out? Not if you haven’t heard the Homeless Gospel Choir. Derek Zanetti is using his musical alter ego to spread a punk ideology that preaches inclusiveness, love and hope. New album Normal drops on Aug. 18 via A-F Records and features a cameo from Frank Iero, among other guests. We’re very stoked for everyone to hear it.—Jake Richardson

Even though it may not technically be out this year anymore, two songs (“Young and Menace,” “Champion”), several music videos, a tour announcement with Jaden Smith and plenty of interviews later, we’re inches away from finally listening to Fall Out Boy’s seventh studio album M A N I A. Pete Wentz has said the new album sews “multiple eras” of their own influences, and we can’t wait to hear the final result.—Kristine Cannon

Knuckle Puck’s discography to this point shows a constant trend of maturation through each release, and Shapeshifter is likely to be no exception. The frenetic nature of EPs The Weight That You Buried and While I Stay Secluded brought fans to the barricade, and the 2015 full-length debut Copacetic refined the band’s sound but lost none of the passion (see: “Untitled,” “True Contrite”). Their sophomore album’s lead single “Gone” is just as forward-facing, but still hones in on what Knuckle Puck uniquely do best—which is, of course, being Knuckle Puck.—Kika Chatterjee

Lights’ first release since 2014 will not only feature a comic book series alongside it, but will also feature an entire post-apocalyptic world created by the Canadian singer. Unlike other albums, Skin & Earth will allow you to get lost in a whole new world just like your favorite movie or book.—Jordan Toney