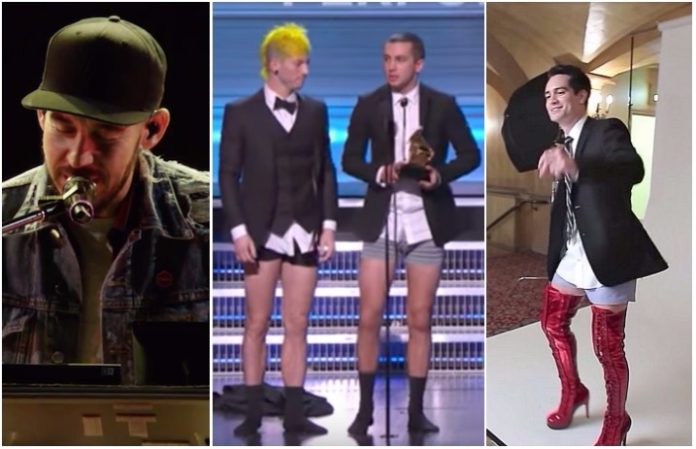 From numerous natural disasters and shootings, to the loss of so many great musicians and the end of Warped Tour, it's safe to say 2017 wasn't an easy year. However, there's still plenty to be thankful for. In the past few months, we watched our scene come together to help each other and do some pretty cool stuff—Broadway and the Grammys, anyone?

Read more: Feel-good tweets we all needed this week

So, here are some of the best moments of 2017 to think about this Thanksgiving.

1. Sonny Moore reuniting with From First to Last

Ten years after leaving the band to pursue a solo career as Skrillex, Sonny Moore not only went back into the studio with his old band mates to record “Make War” (and maybe more songs? We're still waiting!), but also did a surprise performance with them at Emo Nite LA, which included an acoustic rendition of “Emily.”

The death of Chester Bennington was a heavy one for the scene. It led to many beautiful tributes and important conversations about mental health, but the most incredible part was watching so many musicians come together to celebrate Bennington's life in concert.

Panic! At the Disco's frontman didn't just rock as Charlie Price, his Broadway debut also increased both the musical's capacity and gross potential. Also, Brendon Urie in heels: Who isn't thankful for that?

The band also announced an album and a co-headlining tour with Black Veil Brides. This is almost too good to be true.

5. Sam Carter of Architects calling out gropers at concerts

Amidst so many abuse allegations, it's great to see people who work towards making shows safer for everybody.

Read more: Architects’ Sam Carter call out groper: “I saw you f*cking grab at her”

Twenty One Pilots, All Time Low and two songs by Panic! At The Disco: Is there someone walking around NASA with eyeliner and a My Chemical Romance shirt on?