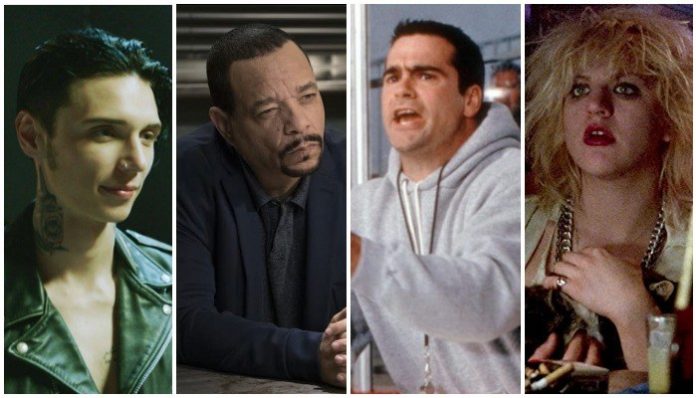 Everyone loves to see their favorite band get mentioned or played in a movie, but it’s far more exciting when you see the musicians you love come to life as a character on the big screen. Sure, plenty of actors such as Johnny Depp, Taylor Momsen or Jared Leto have transitioned into performing music after solidifying themselves as high-profile actors. But the flip side of this scenario is far more interesting to see happen.

Take a look below for 10 of the best musicians who have turned to acting later in their careers.

Marilyn Manson’s live shows have proven that he embraces theatrics to the extreme, so transitioning to film couldn’t have been too hard for the shock rocker. After getting a start in movies and TV fairly early in his career with 1997’s Lost Highway, he’s gone on to take fantastic roles in Sons Of Anarchy, Let Me Make You A Martyr, Eastbound & Down and tons more.

Most know Henry Rollins as the uber-aggressive frontman for Black Flag, but he’s done a ton of acting in the time since he split with the veteran punk band. Rollins has shown he can handle a multitude of roles, from being an ice hockey coach in Jack Frost to a white supremacist in Sons Of Anarchy and a cannibal in He Never Died, among other characters.

By now, it’s almost arguable that Ice-T is more well known as an actor than a musician. He got his start by becoming one of the leaders of hip-hop in the ’80s and ’90s and fronting his metal band Body Count. However, he’s been acting just as long and eventually caught widespread attention as one of the core cast members of Law & Order: SVU.

The frontmen of Black Veil Brides and Asking Alexandria didn’t have a ton of acting experience under their belts prior to American Satan, but they showed they can handle themselves well in front of the camera. Their roles as rock stars took a fictitious turn for the film and were well received, leading to a follow-up TV series getting greenlighted as Paradise City.

David Bowie was a vastly talented star and will forever hold a place as one of the most important musicians to exist, but his acting experience goes deep, too. From leading roles in movies such as The Man Who Fell To Earth, Merry Christmas, Mr. Lawrence and Labyrinth to supporting roles and cameos in Zoolander and The Last Temptation Of Christ, among others, Bowie left a huge imprint on multiple forms of entertainment.

From his massive breakthrough with N.W.A. to successfully going solo, there’s a lot to say about Ice Cube. As his music career hit a huge wave of popularity, he took his skills to the screen. Right from his first role in Boyz N The Hood, he was viewed as a star and started getting cast in more diverse film genres, such as action, comedy and more.

Machine Gun Kelly has been on a lot of people’s minds after doing a fantastic job portraying Tommy Lee in The Dirt, but he’s been featured in a few different film projects before then. The rapper made his debut in the romantic drama Beyond The Lights and went on to feature in projects such as Bird Box, The Land and Roadies before his massive praise for the Mötley Crüe biopic. The musician also a handful of upcoming roles in production including a Western.

Late Linkin Park singer Chester Bennington will always be remembered for his highly influential contributions to music, but fans can remember the musician through his movie cameos, too. The vocalist made appearances in both Crank and Crank: High Voltage as well as a brutal role in Saw VII.

A lot of comparisons can be made between Courtney Love and Sex Pistols bassist Sid Vicious’ girlfriend Nancy Spungen, but Love nearly got to portray her in the classic biopic about the couple. Unfortunately, she only received a supporting role in the film, but she went on to do tons of acting in movies such as The People Vs. Larry Flynt, Man On The Moon and more.

Lamb Of God vocalist Randy Blythe has one of the most brutal onstage presences in metal, so it’s not entirely surprising that he’s acted in a horror movie. The Graves isn’t a massively known film, but with Blythe’s appearance as well as House Of 1000 Corpses star Bill Moseley and A Nightmare On Elm Street’s Amanda Wyss, it’s a must-see for horror fans. Blythe is also set to play Dom in five episodes of the American Satan spinoff, Paradise City.