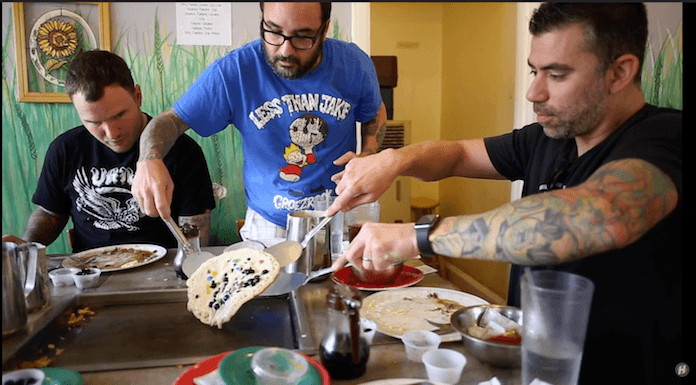 This summer, pop-punk lifers New Found Glory offer food for thought—and eating. The band are currently on tour in support of Makes Me Sick Again, a re-release of their Hopeless album Makes Me Sick, which features three new songs augmented to the original release.

“Touring is really cool because all of our old fans have really cool jobs,” guitarist Chad Gilbert says. “That’s one of the things we like to talk about: When we touring in the TRL/MySpace days, we were all teenagers. We were like [adopts sheepish tone], ‘We’re like this band…’ and all the adults would go, ‘Who?’ Now that we’re older, the people our age grew up with us, and have cool jobs. We’ll go into a place and order food, and the manager will be like, ‘The bill’s on us; I grew up on you guys.’ Now our fans are managers of businesses.’”

Gilbert describes the video for “Heaven Sent” as “a happy accident,” recalling that band photographer/archivist Paris Visone just happened to be in town when the band were originally discovering sounds in the studio and recording the song. The band had 13 songs they loved for possible inclusion on the album, so instead of putting all of them on, they just used 10.

“The way people listen to music now, it’s better to give them things in spurts,” Gilbert says. “We’ll give them the 10 songs and then tour behind that; it’s kind of like how Ridley Scott did Prometheus again. [Laughs.] Like, ‘Here’s the digestible version of Prometheus, and now here’s the full idea seen through, now that you’ve had time to live with Prometheus!’ ‘Heaven Sent’ is on the deluxe version: It went from a B-side to track one!”

Right around the 1:47 mark, you can see drummer Cyrus Bolooki and bassist Ian Grushka making huge pancakes on what looks like a Japanese hibachi grill. (Are those M&M’s in that batter?) It’s only fitting because Sunday, June 24 marks the launch of BreakFest, a celebration of punk rock and breakfast taking place in Gilbert’s hometown of Franklin, Tennessee.

Gilbert invited bands (including Bayside, Free Throw, the Dangerous Summer, Hot Rod Circuit and others) to play and enlisted owners of some of his favorite places to eat in Franklin (including Five Daughters Bakery, Frothy Monkey, Triple Crown Bakery and others) to serve their breakfast specialties. This may very well be the only time you will ever see fans and rockers alike genuinely stoked to be wide awake at 8 a.m. on a Sunday.

“All the places listed on the BreakFest ad mat are all my favorite places to eat in Franklin,” Gilbert says. “I know all the managers of all those places. When we booked this tour, there wasn’t a date in Nashville, and it seemed like the right time to do something like this. So it worked out pretty cool.”

BreakFest’s 8 a.m. start time is earlier than the first set at Warped Tour. When anybody asked him if he was out of his mind, Gilbert laughed. “I told them that’s why it’s going to work. When people ask if I’m out of my mind, I have to see what that’s like. People like an experience that’s something different. We’ve all gone to so many music festivals, but we haven’t been to one at 8 a.m. that serves doughnuts and coffee.

“Look at a lot of the people I know who love punk rock,” he continues. “Bayside have their own coffee bean company. Ben [Walsh] from Tigers Jaw and Joe [Marro] from the Early November have a doughnut company. There’s a thing that’s happening that whenever you started a band, you did it yourself and made it happen. Now we’re seeing that attitude happening with other businesses. The breakfast thing really fits with the punk-rock thing. I think it’s going to be a fun time.” If you want to get your breakfast vibe on to some loud music, you can get tickets to BreakFest here.

And in the food for thought department, in mid-May, NFG, Dashboard Confessional’s Chris Carrabba and former Yellowcard frontman Ryan Key put on a special benefit show for the Marjory Stoneman Douglas High School. The proceeds are earmarked to the Broward Education Foundation’s Stoneman Douglas Victims’ Fund, which will distribute aid to victims and families of the tragic school shooting that occured Feb. 14.

“It was great,” says Gilbert about the benefit. “The city really came together. From the radio station to the security to the people selling food to us and the staff, everyone did it for free, and everybody worked together.” Gilbert attended J. P. Taravella High, but frontman Jordan Pundik and Grushka attended Stoneman Douglas. “It’s really weird to hear Stoneman Douglas on everyone’s radar around the country or the world. Obviously, nothing can make better what happened, but we are really lucky, and we wanted to use whatever we could to raise money for the families that were affected by it.”

“If you’re a fan of our band, you might have a shirt that says ‘Coral Springs easycore’ on it,” Gilbert says. “That was our thing; nobody had ever heard of Coral Springs. Before we played, I wrote a little speech. We wanted to make sure that it wasn’t about us or the performers. It was about supporting our community, and it seemed like the fans and the people really appreciated that.”