Keith Morris is far more cooler than you, this writer and most of our friends. And really, he misplaced that last rat’s ass he could give. That’s because the only thing the former frontman for American punk icons Black Flag and Circle Jerks is really stoked for is the completion of Watermelon, the indie-film foray of his band OFF!

On April 1, Kickstarter ran a small video clip of Morris saying he was the new music director for the crowdfunding site as an entertaining way of calling attention to securing capital for Watermelon, the band’s sci-fi rockumentary film and attendant album. As they say in the business, shit happens. And sometimes it doesn’t.

“We posted it on April Fools’ Day and being a part of a community that has a certain amount of [people] who claim they have intelligence but don’t have intelligence?” the singer says, dripping with sarcasm that would decimate a 12-pack of Bounty. “It turned into this, ‘Oh, I’m so confused, what are you doing?’ There are people who think I’m the new director of music at Kickstarter.

“It didn’t roll out the way it was supposed to roll out. We [were] told that they were going to do a real bump the second week in. But when you go on there, you have to go into the music category, rather than film. And we’re making a film.

The internet being what it is, Morris and the rest of OFF!—guitarist Dimitri Coats (Burning Brides), bassist Steven McDonald (Redd Kross) and Hot Snakes drummer Mario Rubalcaba (with the occasional assist from the Melvins’ Dale Crover)—have had to contend with their fair share of trolls and dullards trying to step to what the band are trying to do.

“There’s the guy who’s like [imitates snotty know-it-all type], ‘Well, why don’t you just make an album and not make a movie?’ There’s the haters, the trolls—because you can’t run any kind of page on Facebook without having the trolls spring to action. They’ve got nothing concrete to say like it’s supposed to be pertinent, but it’s not. We’re talking about the punk-rock ethics committee: ‘You can’t do that. That’s not punk rock.’”

Morris is guardedly optimistic about the Kickstarter process, but he’s learning to be a Zen master about the outcome. When asked if OFF! were sweating the weeks, he remains as cool as an axe.

“Yeah, we are,” he admits. “I’m sober: I’m a cocaine addict and a blazing alcoholic. I’ve been sober since 1988, but it’s like there’s a part in your sobriety where you’re working the program or you’re working the steps and you say, ‘Hey, fuck it all. I’m throwing my arms up in the air because I have no control over it.’ If 12 people sign up, if 1,200 people sign up, if 12,000 people, 12 million sign up for it? All right! But I have no control over it because I’ve gotta stop stressing out.” 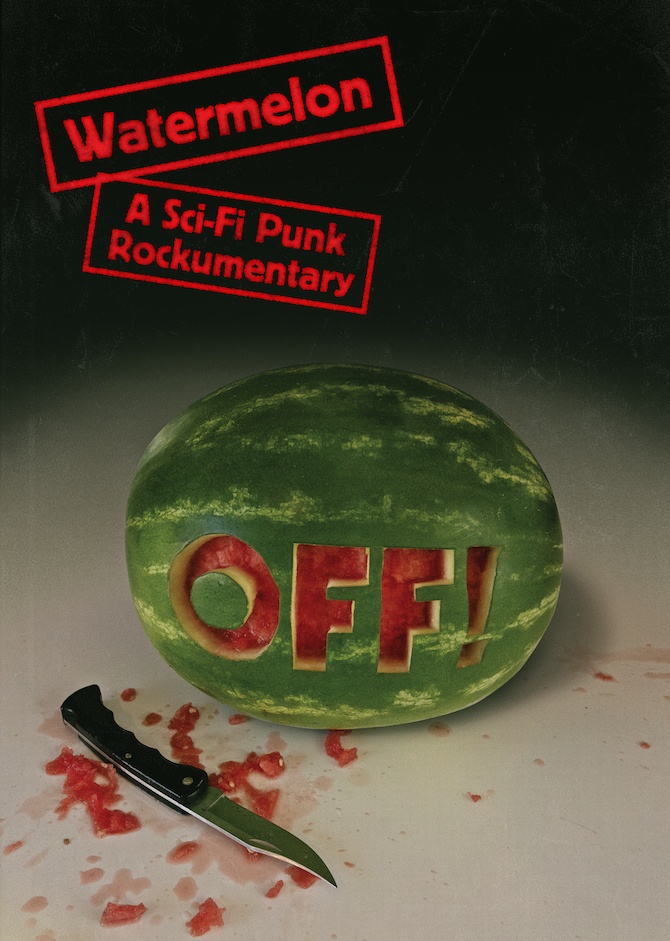 With three records and plenty of touring under their collective belt, the band know what it’s like to pay dues and make all the decisions they see fit. Making a feature-length movie is definitely more daunting than booking a tour. Then again, with these lifers at the helm, why not?

“Here. Let me explain it like this,” he begins in earnest. “I’m known for doing a certain thing: the guy who’s being in front of a very loud band that’s blasting away as fast as they can, with me screaming and yelling at the top of my lungs ‘I hate the government, I hate the prison system, I hate the judicial system.’ OK, we know all that. I’ve been doing that for years.

“Give us something new, give us some new take on something. [Adopts excited punk tone.] ‘It’s time to bash Donald Trump!’ Wow, didn’t we do that when Ronald Reagan was in office? When Bush was in office? Some of us even bashed Obama and Clinton. So how much of that can you do? How do you say, ‘I hate the president’ without actually saying ‘I hate the president?’ I have absolutely no problem with it because I felt I was up for the challenge to put a different spin on it. How about somebody speaking from the depths of hell?

One week left to go and we are extremely honored to offer this exclusive collaboration design by iconic artist Shepard Fairey/@obeygiant, limited to 300 18×24 prints signed by Shepard, 500 t-shirts in all sizes, and 250 skateboard decks! These items are only available at our campaign page: Link in bio

“We’re in a box,” he continues. “We’re in the punk-rock box. In the beginning, there were no boxes. There was no list of things to do. There was no, ‘Well, you look like this, so you don’t belong.’ In the beginning, our punk-rock community was very much like a fiesta: Everybody was allowed to come. Everybody was welcomed with open arms. Over the years, it became very regimented: ‘We’re the punk-rock ethics committee, and you don’t look right. Why do you have a keyboard on your recording?’ Just a lot of limp dick stuff like that. Fuck that. This is our opportunity to jump out of that box.

Watermelon is the point where Morris’ real-life health travails, a life-on-the-road rockumentary which finds the members seemingly hating each other and a semi-elaborate science-fiction superhero team that saves the world intersect. (Coats will be directing the film, not Michael Bay.) If it sounds ridiculous, that’s because it very well is: The title of the movie (and the attendant album and the entire concept) comes from Morris’ penchant for the fruit. He says a glass of watermelon juice was “one of the greatest drinks I’ve ever experienced.”

The mitigating factor here is that the singer is a diabetic: After downing a glass of the highly sugared juice, he got “sky high” with a glucose level of 400. (A count of over 200 is bad news. —health ed.) At the beginning of the film, you see the band straining while under the grind of touring, prior to breaking up. Morris learns that he’s developed erectile dysfunction. Watching television after one botched love connection, our feckless hero sees “a penis doctor” on a late-night television commercial.

We have new rewards up on our Kickstarter campaign page, including an Exclusive Red Vinyl Live LP (limited to 750) and a chance to be at our Album Premiere Show when we record it on Saturday, January 11, 2020 in Los Angeles, CA! Be in our movie! (Link in bio)

Morris visits him, and the doc gives him a glass of watermelon juice which in turn, “gives me superpowers I didn’t have before.” He calls the band back together to meet in their rehearsal space, and he gives them glasses of watermelon juice, giving the members ultimate prescience: the ability to see bad things happen before they occur.

Meanwhile, Watermelon (the album) plans on changing the OFF! game significantly. Once known for their 90- to 180-second adrenaline blasts, Morris says he and Coats have written 25 songs, most of them three minutes or longer. Fans can expect plenty of sonic changes and lyrics marinating in the world of conspiracy theory.

“Dimitri and I dove off the high dive into a pool filled with conspiracy theories,” Morris says. “A lot of the lyrics are what we took from us watching documentaries and reading these stories. We’re talking about certain areas where there are all of these experiments taking place in Nevada over on the New Mexico/Colorado border. We’re talking about secret societies, MK Ultra, chemtrails. It becomes a science-fiction extravaganza!”

The teaser reel OFF! created for Watermelon is quite compelling in its madness. The footage of him quarreling with his bandmates is pretty amazing, all gloves-off and knives-out with clips of him storming out of photo shoots, bitching about the kinds of clubs they’re playing and smashing an entire cake into McDonald’s chest after the bassist dared to commemorate the singer’s birthday onstage. The audience members dismiss Morris as a bitter old man with mental health issues. If it was scripted, it’s magnificently convincing. If it’s cinema verite, it’s positively jarring.

Duke knows what's up! OFF! fans, PLEASE make a donation or grab some of the fun junk we have for sale to raise money for our film! Link in bio

“We only had one cake,” Morris says. “If you only have one cake, you gotta do what it takes. [Laughs.] A lot of those clips were first takes. It’s what we do. The people who have read the script have said that we’re trying to make another Repo Man,” a reference to the 1984 film featuring Emilio Estevez and the late Harry Dean Stanton. “And I have absolutely no problem with that.” The inter-band squabbles appear at the beginning of the film, so we see where Morris’ head was at the time of the band’s staged demise. “It’s like a Wizard Of Oz situation,” he says. “I mentioned the concept of The Wizard Of Oz to someone, and they actually accused me of being Dorothy.”

Morris carries that rare embodiment of punk-rock stature that has endured over generations. He was at ground zero decades ago for the SoCal hardcore zeitgeist and has remained able to ride tall. (Do you remember his name on the credits to Three Cheers For Sweet Revenge?) But for all his stressing, wisecracking and annoyance with forces outside his control, he’s still enjoying himself massively.

“We actually had several occasions through this experience where we looked at each other, and it was like, ‘What are we doing?’” Morris reveals. “‘I’m not having any fun.’” He lets that line sink in a few seconds for effect. “But we are. We’re having a ton of fun.”

You can help OFF! finish their science-fiction extravaganza at their Kickstarter page, or check them out when they head out on their summer festival tour.