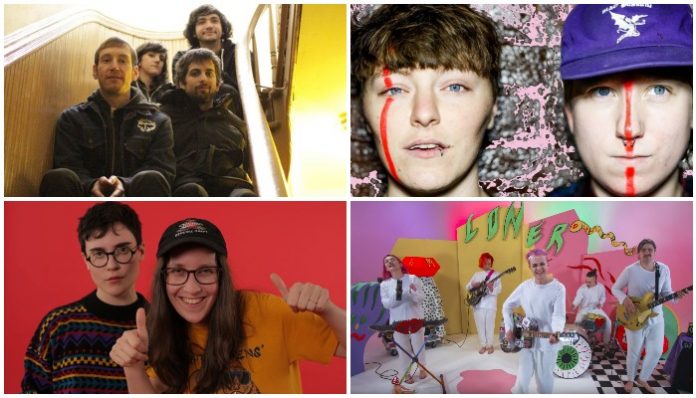 What began as an emphatic middle finger to the closed-mindedness of an ’80s world has blossomed into a full-blown movement. Queercore has quickly transcended its DIY punk roots, now spilling into a plethora of genres and media. Films, magazines and countless other art forms fall under the queercore umbrella, but it all comes back to the music that fueled a generation of LGBTQ+ rebels.

Donning dog masks (and not much else, as the show goes on), Dog Park Dissidents are a self-described “angry queer punk-rock duo,” and there really isn’t a better way to label them. Flaunting a powerful, pure-punk sound behind the impressive pipes of vocalist Zac Xeper, the pair look to spread a message of liberation through in-your-face lyricism and an overall “fuck you” attitude.

Drawing clear comparisons to the Buzzcocks with a tinge of David Bowie, the Spook School explore the hot-button topics of gender fluidity and sexuality through a carefree, head-bopping sound. Sadly, the band will be hanging it up following the completion of their remaining tour dates, but if you’re in the U.K., you won’t want to miss the final class of Spook School.

One thing you should know about Partner is they take themselves very seriously. If you can’t sense the sarcasm, then the Canadian alt-rock duo might not be for you. With unmatched catchiness and razor-sharp wit, the pair crush stigmas by spouting all-too-relatable lyrics. Whether it’s the story of crushing on an athletic girl in “Play The Field” or discovering a roommate’s personal toy in “Sex Object,” they tell stories many of us have experienced with a lighthearted twist. Their latest EP, Saturday The 14th, shows that listeners can’t truly lump the band into a genre due to their eagerness to tackle a fresh sound with each track.

Repping the name Girls Living Outside Society’s Shit should tell you enough about the hardcore quintet’s view on the world. Although they’re the only band on this list not currently active, their effect reaching past their demise is substantial enough that it would feel wrong not to include them. G.L.O.S.S. took the punk purist path, playing fast and loud while branding their ethos permanently in the ears of their cult fanbase. Their music proved it’s not only OK to be different, but you should also be celebrating it. Now go listen to “Outcast Stomp” and mourn how you never got to see them live.

When you catch the attention of Iggy Pop, you know you’re doing something right. Described by Iggy as “Strange people from Liverpool…but they rock like crazy,” the English five-piece seem to not only play under the wild moniker but live it as well. Glam-rock to the eye but gritty garage rock to the ear, Queen Zee’s brand of weird has them championed as the latest promising rock act to emerge from the U.K.

GRLwood don’t need to be labeled as anything except kick-ass music makers. Blazing trails with their unique brand of “scream-pop,” the best genre to lump them in is one all their own. The duo combine pop, garage and punk while screaming their opinions for anyone within a five-mile radius to hear. Drop everything you think you know about music, and just listen to GRLwood on repeat.

Size Of Sadness only have one EP, but they make a louder statement in six songs than some bands do in their entire discography. Not only commenting on trans and LGBTQ+ topics, they also set their musical sights on addiction and substance abuse through emotion-packed lyrics at a breakneck pace. Their venom-filled words carry more weight coming from a trans trio who aren’t just singing about persecution but living through it.

HQ: Brooklyn, New York
Facebook | Instagram | Spotify
CHECK OUT: “Most Space,” “They / Them / Theirs,” “The Saddest Little Waffle House In Eastern Pennsylvania”

Worriers’ band name can be misleading, but with the quality and grace applied to their melodic punk sound, they have no reason to sweat. The Laura Jane Grace-backed four-piece also aren’t shy about their message, drawing clear lines on pronouns, gender neutrality and the state of modern punk. At points, it’s hard to emphasize with a message in a genre heavily driven by aggressiveness, but Worriers have found a magnificent balance between their rock-solid cause and downright awesome sound.

Queercore’s resident supergroup, the grindcore-inspired HIRS Collective, actually have no solidified members. While shared photos of the group show blurred-out faces, we do know that the collective is a revolving door of LGBTQ+ rock icons. Among the long list of contributors are Against Me!’s Laura Jane Grace, Garbage’s Shirley Manson and G.L.O.S.S.’ Sadie Switchblade. Plain and simple, HIRS Collective offer an opportunity for musicians to lash out at the system however the fuck they want.

Highlighting an extensive community of folk-inspired queercore acts, Kera & The Lesbians provide a relaxed acoustic backdrop for the fiery vocals of Kera Armendariz. What began as an inside joke between Armendariz and her bandmates has turned into a rallying cry for herself and listeners, refusing to be quiet about their identities. Putting aside albums in favor of focusing on individual tracks, be on the lookout for the Kera’s next finely tuned single.