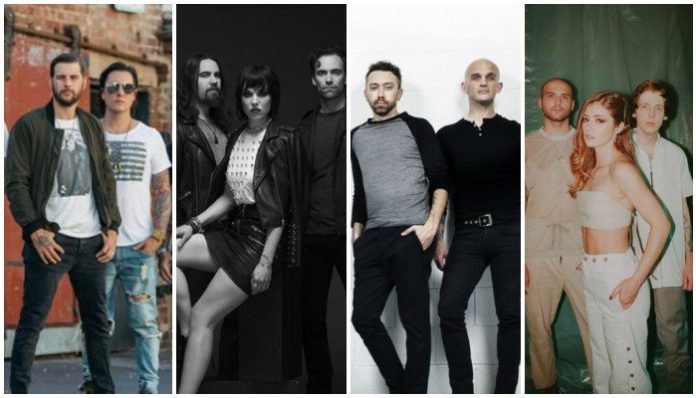 Nothing beats the first time hearing one of your favorite songs. It’s a feeling we never fully appreciate at the moment but then nostalgically crave forever. Fortunately, alternative artists frequently grant us the opportunity to once again hear these tracks from new perspectives through reimagined versions.

From acoustic renditions to orchestral backings and full-on genre changes, there is no shortage of creative approaches to reworking a song. Of course, some attempts have proven more successful than others—occasionally yielding a version that even overshadows the original.

Here are 10 times alternative artists totally reworked their own tracks for the better.

We best know Halestorm for stadium-ready showcases of metal-accented rock ‘n’ roll. But that doesn’t mean that the alternative-rock powerhouse don’t know how to show off their soft side. Last year, they dropped a five-track EP featuring stripped versions of songs from their 2018 album, Vicious. While we thought “Heart Of Novocaine” was poignant to begin with, the reworked version takes it to a whole new level.

Truly, we never would have guessed that half•alive‘s Now, Not Yet hit “still feel.” could be improved even further. Then they went and hit us with an orchestral version in 2020. What’s particularly incredible about this rendition is that it doesn’t sacrifice the original’s poppy melodies at all. Rather than totally overtaking the track and its vibe, the orchestra just adds a new sonic layer. It really feels like it should’ve been there all along.

Against The Current – “that won’t save us (acoustic)”

We’ve never known Against The Current to put forth anything less than their all when it comes to their modern alternative anthems. That said, when they dropped “that won’t save us” last year, we hardly expected them to drop two music videos to accompany it in a matter of weeks—let alone a third acoustic version just a month later. While the original version totally stands alone as a powerful, heavy rock display, there’s just something about Chrissy Costanza‘s soaring vocals on top of pared-back instrumentals that really elevate the mood.

There’s no understating the artistic brilliance behind Biffy Clyro‘s discography. For as long as they’ve been active, they’ve pushed the boundaries of genre with their experimentalism. So for one of their tracks to actually surprise us with its intricacy and elegance is truly an achievement. The 2021 orchestral version of their 2020 hit “Space” does just that. It’s a song fit for a Disney score—and we don’t bestow that honor lightly.

Breaking Benjamin took a marked step back from their heavy rock roots with Aurora in 2020. The acoustic album reimagined hits from various corners of their expansive discography along with a new track, “Far Away,” featuring Scooter Ward. Though all of the softened takes are worth a listen, it’s the closing rendition of “Dear Agony” that really hit us in the feels. This ultra-visceral version of their 2009 title track turns it into a true ballad accented by the sharply contrasting, ever-unique vocals of Lacey Sturm (Flyleaf).

It’s downright impossible to pick a concrete, all-time favorite track from Rise Against‘s 22-year tenure. If we had to choose, though, it would probably be one of the masterful compositions from their 2018 compilation album, The Ghost Note Symphonies, Vol. 1. We’re particularly taken by the reimagined orchestral version of “House On Fire.” For a song so aggressive, they really spun it with a haunting display of sentimentality.

Read more: 10 Dominic Fike collabs that prove he can make music in any genre

The funny thing about the acoustic remastered version of Secondhand Serenade‘s “Lost” is that it actually came before the original. The acoustic track closed out the 2017 Awake anniversary compilation, Awake: Remixed & Remastered, 10 Years & 10,000 Tears Later. The full version then dropped as a single over six months later. While John Vesely‘s signature sentimentality is prevalent throughout both versions, there’s a depth to the acoustic rendition that can’t be beaten.

There are certain perfect songs that you just don’t touch out of fear of muddying them. And prior to Avenged Sevenfold‘s 2020 release, Diamonds In The Rough, we would have assumed “Afterlife” to be one of them. As it turns out, though, there may not be a song on Earth that won’t benefit from a violin treatment. It’s a rather subtle change compared to some of the other reimagined tracks on this list. That said, it’s just as effective.

Listening to Tokio Hotel‘s “Monsoon” circa 2007, we never imagined that we’d have a totally new version popping up on our release radars over a decade later. The band revisited the track last year and incorporated it into their iconic electro-pop evolution. Admittedly, it felt like a bit of a snub to the gritty, alternative hit at first. Within the first minute, though, we were totally sold on the new direction.

Read more: 10 acoustic renditions of 2000s songs that are better than the original

Shinedown – “GET UP (Piano Version)”

Shinedown‘s 2018 album, ATTENTION ATTENTION, certainly brought some sonic divergences from the band’s hard-rock foundations. So, when they dropped a piano version of “GET UP” the following year, we just about hit the floor. Even if we had, though, this song would have picked us right back up (no pun intended). The pared-back version is beautiful, to say the least, bringing focus to the rousing narrative.

What are some of your favorite reimagined versions of alternative songs? Let us know in the comments!