American Horror Story isn’t the same without Sarah Paulson. Featuring in every season except last year’s 1984, although she was rumored to cameo but the plan changed at the last minute, her dynamic, show-stealing performances have become an AHS tradition that keep us guessing every year.

Now that we know Paulson will return to star in season 10 in a main role, we figured we should celebrate her many characters in the only way we know how—by pitting them against each other until one emerges victorious as the most iconic part Paulson brought to the AHS anthology.

You might not remember her by name, but “Sexy Sadie” was Paulson’s contribution to Charles Manson’s band of merry murderers, as portrayed in Cult episode “Charles (Manson) In Charge.” The scene reenacting the infamous murders of actress Sharon Tate and her friends plays out as a comparison to Kai Anderson’s (Evan Peters) followers, with Susan Atkins played by Paulson to depict her loyalty to Anderson’s cult.

A feisty, bloodthirsty, monobrowed character devoted to Manson’s cause, Atkins’ ranking at the bottom of this list is more thanks to her short screen time than a reflection on Paulson’s talent.

Paulson’s first Roanoke role reenacts the “real” character of Shelby Miller, loving wife of Matt Miller and new owner of the infamous horror house whose story makes up My Roanoke Nightmare. She’s not the most memorable role, but she plays a vital part in the Roanoke story that unfolds on screen.

From raining teeth to witnessing the Butcher’s human sacrifices, traumatized Shelby somehow survives her first nightmarish episode in the house. Paulson as an actor portraying a real person is the kind of mind-meddling concept AHS pulls throughout the sixth season.

Roanoke may have not been a hit with fans, but Paulson’s adorably British character of Audrey Tindall through Return To Roanoke brought a wide-eyed wonder that the season needed. Besotted with her younger husband Rory (Peters), who she met on the set of the show, Audrey faces as bad a time in the house as her character Shelby.

She’s tormented by actress Agnes Mary Winstead (Kathy Bates), forced to eat human flesh and has her teeth removed by the Polks, only to survive the house and wind up wrongfully killed by police when they arrive to investigate. #JusticeForAudrey

Paulson’s first Apocalypse character Wilhemina Venable is a two-part story—there’s the slick, acid-tongued Ms. Venable who fronts the Kineros Robotics desk, handling admin and drug deliveries for Mutt and Jeff. Then there’s the ruthless, purple-clad leader of Outpost 3 who enforces summary execution on the survivors in her care.

With a click of her cane and a stony-faced demeanor, along with a few hidden weaknesses to explain her strict nature, Ms. Venable whips the Outpost into shape and shows Paulson’s ability to command a season in a heartbeat.

Freak Show’s Siamese twins Bette and Dot tested Paulson’s talent to the limit and proved to be a lovable, if not incompatible, pair. Bette sees stars in her eyes, dreaming of a life of freedom and Hollywood stardom. Dot is the more withdrawn and cynical sister who keeps a pessimistic diary of her life’s struggles.

Taking audiences on a roller coaster of emotions, from the twins looking to surgically separate from each other to the duo being taken by the villainous Dandy Mott, the fourth season kept us all guessing the admirable twins’ fate right until the last minute.

Medium Billie Dean Howard, the only living ally of the occupants of the Murder House, was our introduction to Paulson’s enchanting influence on the AHS anthology. Howard’s compelling character keeps herself busy transcending the afterlife, helping Constance Langdon contact her deceased daughter Addie and telling the tale of Roanoke, which started an AHS tradition.

Her character makes two reappearances after season 1, popping up in Hotel on Devil’s Night for her successful TV show and reemerging in Apocalypse to warn of the dangers of the Murder House. Howard is an AHS staple who could easily drop in on any situation.

Hotel’s messed-up Sally McKenna displayed a dark side to Paulson that AHS hadn’t shown before. A former drug dealer known as Hypodermic Sally, Paulson perfectly portrays this deeply troubled ghost that once tried sewing herself to two friends.

Looking like an edgy grunge throwback, McKenna’s twisted need to be loved drives her to assist Iris’ son’s death, command the Addiction Demon and help the Ten Commandments Killer. However, she still comes out as a love-hate character whose story ends happily with her discovery of social media. McKenna had quite the trip.

Paulson’s performance in Cult brought an unforgettably unpredictable character to the mix. Ally Mayfair-Richards, with her overwhelming phobias of clowns and holes, commands the narrative throughout the seventh season. She shifts from a damsel in distress to a formidable villain when put under extreme pressure.

Mayfair-Richards’ body count racks up as the season goes by, but her perfect revenge on her wife, Ivy, via poisoned pasta remains an iconic death in the AHS anthology. The spine-tingling closing of the season’s final episode show how any fan’s predictions of her mysterious character were all wrong.

AHS icon Lana Winters had a notoriously tough time during Asylum. What started as her investigation of the Bloody Face murders at Briarcliff Manor landed her in wrongful imprisonment and forced into electroshock therapy. Her numerous escape attempts only put her in worse trouble with Dr. Thredson, with whom she has a child who later risks killing her, too.

Winters’ heroic climax leads her character into two captivating appearances in the AHS anthology, interviewing Lee Harris on Roanoke and offering her coverage to Mayfair-Richards in Cult. It’s only a matter of time before Winters returns again.

Of course the Supreme tops our ranking. The shining light of third season Coven, Paulson’s iconic character Cordelia Foxx leads Miss Robichaux’s Academy and instructs her young charges in harnessing their powers while exploring her own.

She’s had her fair share of trauma. Surviving a blinding acid attack, it enhanced her visions of the future and she wound up fighting off the Antichrist Michael Langdon throughout Apocalypse. She’s no angel, however, having plotted to kill her mother and burning Myrtle Snow at the stake. But her human weaknesses make her a relatable role that only Paulson could pull off. 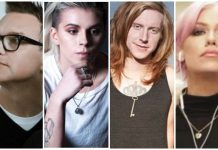