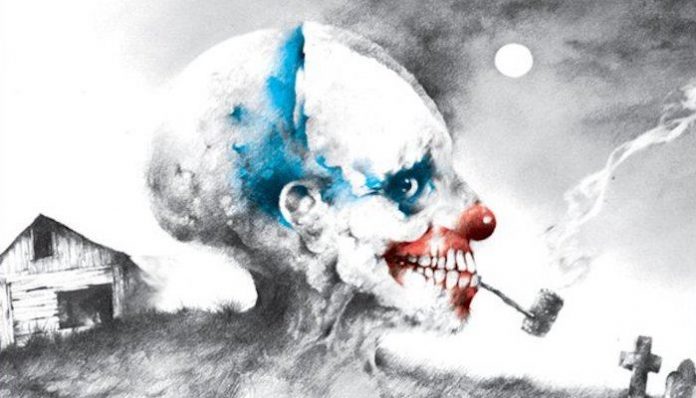 Scary Stories To Tell In The Dark, a new film based on a book series of the same name, is coming to theaters this Friday. You might have read the creepy stories with even creepier illustrations when you were a kid. (How those books made it into our elementary school libraries, we’ll never know.)

In case you wanted a refresher in preparation for the movie but still care to be able to sleep at night, we did you the favor of rereading the nightmare-inducing series and put all the scariest tales in one lovely list.

For your frightening pleasure, here’s 10 of the scariest stories from Scary Stories To Tell In The Dark series.

Some people think dreams mean something: They can tell the future, you’re seeing a past life, etc. In this short tale, that happens to be true. Lexi Morgan had a dream where she was in a room with a carpet that had a pattern resembling large trapdoors, and the windows were fastened shut with large nails. She went to sleep, and a woman appeared to her, telling  her to leave because it was an evil place. The next morning, she plans on traveling to a town called Kingston. But due to her dream, she goes to Dorset instead. She finds a room in a “pleasant-looking house,” but when she’s shown her room, it’s the same one from her dream. Lexi chalked it up to coincidence until she opened the door again and saw the woman from her nightmare. Needless to say, she decided to get out of there while she could.

Always be careful what you wish for, or at least that’s the lesson from this short story. In “What Do You Come For?,” a little old woman is all alone in her house and says out loud, “Oh, I wish I had some company.” Immediately, body parts start falling from her chimney until a full human corpse forms and begins to dance around the room. When it finally stops, the woman asks, “What do you come for?” Unfortunately, the answer probably wasn’t something the poor lady wanted to hear.

Read more: ‘Scary Stories To Tell In The Dark’ gets first unsettling trailer

Jane and Susannah share a room in a small apartment. One night while Susannah’s trying to sleep, Jane starts humming to the tune of “Oh, Susannah.” The girl tells Jane to cut it out because she was trying to sleep, and the humming stops. Later in the night, the humming starts again, and when Susannah tells Jane to stop, she doesn’t. After she gets angry, Susannah tears the blankets away from Jane to tell her to be quiet only to find her friend without a head. Hoping that it’s just a nightmare, the shocked woman goes back to sleep, and we never find out if it really was a dream or not.

If you’re going to create a doll, it’s probably best not to make it after somebody you dislike. When Thomas and Alfred take cows out to pasture, they stay and tend to them for a couple of months. One day, they get incredibly bored and decide to make a scarecrow fashioned after Harold, a farmer they both despise. Every day they take the doll out with them to the field, talk with it and joke around. When they were feeling mean, they beat up the scarecrow and smeared food all over him. One day, Harold grunted. It frightened the men, but after a few days, things went back to normal. Well, kind of. The friends begin to notice Harold growing, and one evening the scarecrow walks out of the hut and climbs onto the roof. The men decide to take the cows back to the valley, except they forget their milking stools. Afraid to go back, they draw straws, and Thomas is the loser. Alfred keeps going, but when he turns back to see if Thomas is anywhere behind him, he only sees Harold putting a skin on the hut’s roof to dry in the sun.

“The Wendigo” isn’t only a story in the first installment of the series, but it’s also based on actual Native American lore. In this version, a hunter wants to go hunting where people rarely go. No one wants to help him until he finds a man desperate for money, DeFago. They go off into the woods together, and on the third night there’s a huge windstorm. Something begins calling out to DeFago, who’s crouched in a corner of the tent. After it becomes too much, he runs out of the tent and into the woods, soon shouting, “Oh, my fiery feet! My burning feet of fire!” The hunter, unable to figure out what happened to his companion, returns to the village where the people mention the Wendigo. Apparently, it “comes with the wind” and drags you along so fast, your feet begin to burn away. Ouch.

6. Maybe You Will Remember

There are few things worse than the fear that you’re going insane. One day, Rosemary and her mother stop at a hotel in Paris. Her mother is ill, so the girl calls the hotel doctor to see what can be done for her. The doctor says she needs medicine, and it can be retrieved from his wife across town. When she returns to the hotel, no one seems to remember who she is. When she asks to see the room her mom is in, it’s totally different than the one she recalls. It turns out that Rosemary’s mother had the plague and died soon after her daughter left. In order to divert chaos, the doctor buried her body in a cemetery, redecorated the room completely and told everyone in the hotel to pretend they didn’t know her. What resulted was a poor girl who thought she was losing her mind and didn’t know where her mother was.

Two best friends, Ted Martin and Sam Miller, are hanging out on a fence near a field of turnips. Suddenly, they see something crawl out of the field, stand, then disappear. The Thing comes out again another time and starts walking toward the men until it turns back into the field. When it returns a third time, the friends run, only stopping when Sam says he wants to touch it to see if it’s real. When they get close enough to get a good look, it looks like a skeleton with “bright, penetrating eyes sunk deep in its head.” When they run, it follows them back to Ted’s house, staying out on the road until finally disappearing. After a time, Ted becomes sick, and on his final day, Sam says he looks exactly like the skeleton.

Blue-eyes and Turkey are out playing in the woods when they see a young gypsy girl playing in a drum. The drum is special because little figurines come out and dance when it’s hit. They ask the girl if they can have it, but she says they have to be naughty in order for her to give it up. After a night of being bad, they go to the girl and ask for the drum but are denied because they didn’t behave badly enough. This happens again the next night, and their mother threatens to leave them with a new mother if they don’t start behaving. However, the two little girls want the drum so badly that they go home after seeing the gypsy girl a third time and break furniture, plates, beat the dog, hit their brother and punch their mother. When they return to the girl a final time, she no longer has the drum. Instead, she laughs in their faces and says they now have to live with their new mother with glass eyes and a wooden tail. They run home to find the house empty, but that night when they look into the window, they see their new mother’s glistening glass eyes and hear her wooden tail “thumping on the floor.”

Read more: ‘Scary Stories To Tell In The Dark’ becoming a movie

In a small Ireland village, no one ventures at night for fear of the creatures that lurk in the shadows. “Long Tom” McManus wants to prove to everyone in his village that the supposedly “cursed” bog outside of town is as safe as can be. Despite his mother’s pleas, he journeys into the night with only a lantern to light his way. Some townsfolk follow far behind just to make sure they really have something to be afraid of. When Tom comes upon his willow tree destination, nothing happens initially, but then the wind blows his lantern out. When the moon comes out from behind the clouds, Tom can be seen fighting the shadows before it goes pitch black again. When the moonlight peeks through again, Tom’s hanging from the tree by one arm and what looks like a dead hand pulling on his other until he’s from the tree and dragged into the dark. He isn’t seen again till the next night, crying and mumbling under the willow tree with only one hand.

This is one of the only stories with a nice ending. A priest decides to stay in a haunted house one night to see if he can help a trapped spirit. Not long after he arrives, he hears footsteps coming from the basement coming up to his room. The ghost opens the door, but when asked what it wants, the door closes. This happens another time until the priest shouts, “In the name of the Father, the Son, and the Holy Ghost, what do you want?” The ghost is an embodiment of a young woman, and she tells the preacher her bones are buried in the cellar. She says if he gives her a proper burial, she’ll finally be able to rest. She also adds that he should get the end joint of her little finger and put it in the collection basket during services to reveal who her murderer is. If he comes back another night, she’ll tell him where the money is to give to the church. All happens just as she says, and it seems like a shocking happily ever after.

Which is your favorite story from Scary Stories To Tell In The Dark? Let us know in the comments below!