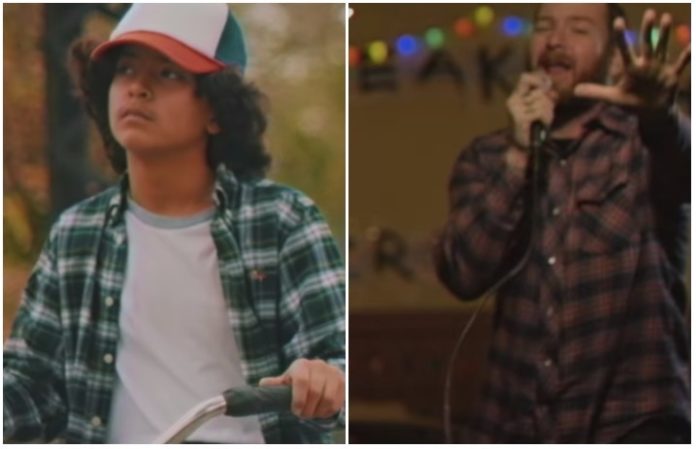 A Stranger Things-themed music video from Speak The Truth… Even If Your Voice Shakes? We're all in.

The new supergroup from Senses Fail singer Buddy Nielsen and members of Finch have dropped a music video for “Drowning On The Sidewalk Or Dying Inside,” directed by Peter John and off their recently released debut album, Everyone You Love Will Slip Away From You.

“Our friend, Peter John, had this great vision for this video with a nod to Stranger Things,” the band tells AP. “We’re all big fans of the show; we all grew up in the '80s. It was really fun to be able to give a nod to our childhood.”

The video has it all: from Dustin, Mike, Lucas and Will look-a-likes riding their bikes to Christmas lights strung up on a living room wall and Buddy Nielsen screaming into a walkie talkie.

“The kids were super stoked to be in the video,” the band says. “They’re all first-time actors, and they did an amazing job! The creative director, Dan Coronado, spared no expense in getting vintage bikes, vintage '80s posters and toys for the set. I think he was just excited to add it all to his collection! This was by far the most fun we’ve had making a video. Peter really went the extra mile and getting to spend a minute in our own Stranger Things universe was awesome!”

As previously reported, Nielson described “Drowning On The Sidewalk Or Dying Inside” as a lyrical return to a darker style. “I spent the last two Senses Fail records writing really positive and emotional lyrics, which was a big departure from all the other material I have worked on. In response to that, there were a lot of fans that were upset that I had suddenly changed tones on them.”

Nielsen continues to say the lyrics to “Drowning” were not only a response to fans, but also about the miscarraige his wife had.

However, Nielsen acknowledges that the reoccurrence of moodier subject matter was prompted by a personal tragedy, and the vocalist crafted the “Drowning” lyric as a response to an extremely difficult situation.

“It is a conversation I'd like to have with my unborn child that, depending on what you believe, was either never alive or fully alive,” Nielsen says. “Either way, it is my attempt at making peace with it, while also fulfilling people's wishes of writing songs from a darker, more depressing place.”