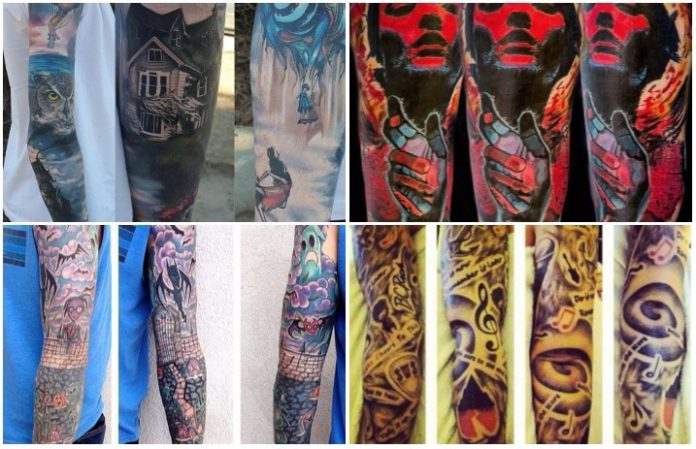 There are millions of fans who get tattoos that represent their favorite bands, but there also are superfans out there who dare to go even bigger by getting a full sleeve. Would you give your entire arm for your favorite songs, lyrics, records and artists? These people did, and they got some absolutely stunning artwork in return.

Aside from being absolutely gorgeous, this Circa Survive sleeve goes above and beyond to capture the band’s discography. Juturna, On Letting Go and even the B-side “The Most Dangerous Commercials” are all represented here.

This incredibly colorful sleeve is dedicated entirely to ADTR’s 2009 record Homesick. There are tons of Homesick tattoos out there, but this one takes fandom to a whole new level.

Converge’s cover artwork for their 2001 record Jane Doe is exceptionally well-known and admired within the hardcore, metal and punk communities. The artist is none other than the band’s vocalist, Jacob Bannon, who has gone on to create many album covers for other bands. This half sleeve is a vibrant testament to the love of Bannon’s artwork and, of course, the record itself.

Spent today working on a Coheed and Cambria sleeve.

A post shared by Kimberley Warren (@kimberleywarrentattoo) on Jul 1, 2017 at 8:40am PDT

One of the most popular rock/metal bands of the last several years has been Coheed And Cambria. They are a band that involve themselves deeply in concept albums, and frontman Claudio Sanchez even has his own series of comic books. So it’s not surprising there are people out there clamoring to get Sanchez’s artwork tattooed on them. This sleeve-in-progress shows the world of sci-fi and fantasy that Sanchez and the band have created.

This sleeve is dedicated to HIM and the band’s record Deep Shadows And Brilliant Highlights, the deluxe, remastered edition of which was released in 2014.