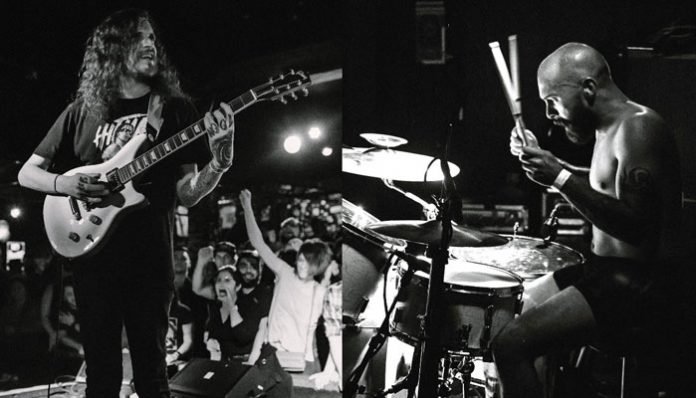 Post-hardcore stans, arise and hit that preorder link. The Fall Of Troy have returned with their first new music in five years. The self-released album, Multikearth, finds the Pacific Northwest trio going back and moving forward in all the best ways.

Mukiltearth (a tribute to their Mukilteo, Washington, hometown) reveals history, insight and musical firepower. The album features re-recordings of the first songs the band ever wrote, back when they were known as the 30 Years War. Finishing the album are four new songs with the lineup of guitarist Thomas Erak, drummer Andrew Forsman and bassist Tim Ward. The project may have started in 2016, but the energy is clearly all about right now.

Read more: Hear the first single off of the Fall Of Troy’s first album in nearly four years

Prior to tomorrow’s (Aug. 7) release, we asked Erak and Forsman to give us a rundown of Mukiltearth’s 10 tracks. Whether they’re looking backward or facing forward, the takeaway here is that the Fall Of Troy are constantly moving.

“A Tribute To Orville Wilcox”

THOMAS ERAK: This song was one of the last pieces of the puzzle when first writing the original demo versions of these older tunes. Tim and I used to prank-call people from the telephone book back in high school. Orville Wilcox was a repeated callback for us. We actually convinced him we were an old friend named “Ted Rogers, back from ’91.”

ANDREW FORSMAN: One day when I showed up to practice to finish writing a new song, what would become this one, Tim and Thomas told me that they had called Orville earlier, but his wife had answered instead. Gravely, she informed them that Orville had passed away that week and that a memorial service would be held shortly. They had told her “Ted” would be attending and wished her well. We knew we had to honor Orville, so we named this song after him. The song has a lot of the classic building blocks of Fall Of Troy songs. Lots of pull-offs, see-sawing sung melodic parts and screamed heavy parts. And a short bridge leading to a straightforward hammer over-the-head ending. When we wrote this, it seemed like we had found a bit more of our voice.

ERAK: This was the song that started it all for me when we put the second half of this song, with the breakdown leading into the “jammy/guitar rock” section. There was no way to not have screaming become a staple of our vocal delivery. The title is a reference to the younger people that followed the local music scene wearing the combo the song is named after. Including us.

FORSMAN: This song makes me think of the crisp fall days with bright blue skies. This was the first song we wrote together, and it feels as exciting now as it did then. Since this song was written by a bunch of 16-year-olds, the somewhat cheesy lyrics seem honest in a way that they don’t when being written by someone much older. First love hurts in a different way than any other, and this song captures that for me. The second half always felt like our take on Modest Mouse. I always loved that we wrote a song that found its way into that corner.

“The Tears Of Green Eyed Angels”

ERAK: This song was where I wanted to step it up as far as the guitar work and interplay went for the band. Going back and reworking the tune, it still stands out as both fun to play and pleasing to listen to, with its melodic and energetic leads.

FORSMAN: I remember showing up to practice and hearing Mike Munro [the second guitarist in the 30 Years War] and Thomas practicing the main guitar lead from this song. I was freaking out internally because it was so beautiful and technical but wanting to play it super-cool because we were still getting to know each other. When we recorded this version of the song, I remember having to restart a million times because I kept doing the wrong number of measures in the verse. It’s always weird how a song morphs in the absence of other players. The super-hopeful/tough bridge in this song is notable because its original incarnation was one of the first delay pedal-driven melodies written for the Fall Of Troy. It contains lyrics we cannibalized for a part in the final track from our first full-length, “What Sound Does A Mastodon Make?”

“Mirrors Are More Fun Than Television”

ERAK: A song that has always somehow managed to stay in the minds and questions of the most loyal Fall Of Troy supporters. Though a bit of a different flavor for us, I believe this song lends itself to being a precursor for some of our more melodic and more structured songs that would begin to appear later as staples of our repertoire.

FORSMAN: This was a big “will we/won’t we” question for us when we were deciding to do this album. It’s such a departure from every other song from that era. It felt a bit out of place to include. We ultimately included it because it is essential to who Fall Of Troy were at that time, and also because we all love the song. The lyrics are an attempt at a “Song About An Angel” [by Sunny Day Real Estate] conversational style. I struggled with wanting to update the lyrics, but I think for the purpose of the album, to show the beginning and present of a band, it was important to keep them unchanged.

“The Day The Strength Of Men Failed”

ERAK: For all the Lord Of The Rings fans out there, we are one. We ended up having a second song based around the trilogy after this tune [called] “The Last March Of The Ents.” Who knows? Maybe someday we will finally round out the trio.

FORSMAN: I think this was the first song we wrote that had an odd time signature as the main part. This is another “building blocks” song. We would always get really stoned and watch Lord Of The Rings. We had read the books and loved them, so we had to write a song about it. There are so many things about the old songs from this album that as an older person, I would be too self-conscious to try. Which is sad. I am grateful for youth and the willingness to embrace the things I loved without reservation. Because that instinct led us to write this banger of nerddom.

“Knife Fight At The Mormon Church”

ERAK: Back in high school, a lot of the drama would end up being solved next door, in the parking lot of the Mormon Church.

FORSMAN: Whenever we would drive out of the school parking lot, we would drive by the Church next door. You could always tell when something was going down because there would be a million people crowded around and shouting. We were always fans of taking the weirdness from our day to day for band material. It doesn’t get much weirder than hearing someone say “I’ll see you at the Mormon Church after school, and I’m going to beat your ass.”

The tapping part of the intro to this song was definitely influenced by Minus The Bear‘s first EP, which had come out right around the time we were writing this. This song ends with another great Mike Munro contribution, “Break the dawn/And hang the sun.” [It comes from] Tim’s old AOL screen name, Hangthesun. This song ends the first part of the album on what feels like a youthful, hopeful note.

ERAK: The first of the four brand-new songs. This was the first one I was drawn to by its upbeat/punk drumming. Andrew’s signature syncopated rhythms and Tim’s thunderous bass tones set the tone for what these songs were to become.

FORSMAN: The second part of the album was written and recorded in the opposite way that we usually operate. Drums were done first, followed by bass and then guitar. I like to imagine this song as the first shot of a 15-year time skip in our band’s story. The previous song ends with so much hope. Then this comes in with us in post-apocalyptic armor, missing limbs and eyes. In between the two songs are years of exciting success, bloated failure, people dying, addiction, great happiness and crushing depression. I think that comes through immediately. It was especially interesting recording these last four songs. Because I finished my parts, and then roughly a month later I heard the songs completed. Which is a little like hearing a Fall Of Troy song without actually having been there for the writing. Which is surreal.

ERAK: I thought it was suitable to take some time to experiment with my effects pedals liberally again on this record. The whiny guitars that morph into disjointed prog-metal created a perfect challenge to weave in the finger tapping. As well as the fact that we are all playing in different time signatures all over this song. It brings to the forefront the effect of all three parts of the band going off in their own directions. Then perfectly lining up at the perfect moments.

FORSMAN: I have always had a lot of fun at stoplights with my turn signal on, trying to play with the time-signature of an unending clock. The drums for this song reflect that. I had to play to click track in the studio for these songs in order to make the process work. I just fell into my classic routine of trying to play with time signatures.

ERAK: The first riff of this song is the only riff I believe we actually went into the studio with. This song always went along with “Round House” in my head, so I definitely made sure they sat next to each other on the album.

FORSMAN: I used to work at a pet insurance company, and the diagnoses I would see always had crazy names. Borborygmi means “a rumbling or gurgling noise made by the movement of fluid and gas in the intestines.” I felt like that was a good description of our music sometimes. I really tried to make the sections super-clear for the rest of the band to write to. And they walked all over the transitions I had so clearly set out. After my initial aggravation, I learned to love the song they had written over my skeleton.

“We Are The Future”

ERAK: A song suitable for being the first single. I always envisioned it as the closer. The vibe of this song has taken on a whole new and relatable narrative  than it was initially created in.

FORSMAN: This was the last song I recorded. I thought we should have two distinct parts. The first half is me trying to focus on a vibe. For the second half of the song, I wanted to have a part like the second part in the Mars Volta’s “Cassandra Gemini” where Jon Theodore is just flying on the hi-hat. If I got any amount of that vibe, I am happy with it.

I was so happy to hear the melodic component Thomas and Tim had come up with for the second half. The song ends on a tough, hopeful note. It has us realizing the strength from our trials and using that to do better for ourselves and those around us. The album is an exercise in past and present and nostalgia and reality.

You may preorder vinyl, CDs and cassettes at the band’s official website. Digital purchases can be made via Bandcamp.