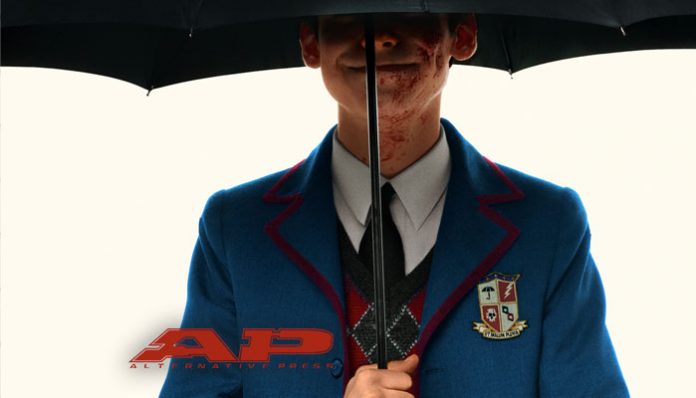 From the day the first issue arrived in bookstores, The Umbrella Academy stirred the hearts of millions of comic fans. Gerard Way and artist Gabriel Bá’s chronicle of the dysfunctional Hargreeves family was a story that simply could not be remanded to the printed page. When Netflix signed on to produce the title as a live-action series two years ago, the excitement was palpable. And it’s only going to get wilder. Alternative Press has teamed up with Netflix to create this official first look at TUA’s second season, premiering July 31.

The last time we saw our numerically designated heroes in season 1, they had obliterated the moon and avoided the apocalypse by nanoseconds. But being a heartbeat away from getting blown to bits was the least of their worries. Number Five (Aidan Gallagher) repeatedly warned his sibs about the risk of using his powers to evade their sister Vanya (aka Number Seven, played by Ellen Page) and her attempted 2019 armageddon.

As a result, the team has been scattered through time. In this case, the decade of the ’60s. Sure, it makes it hard to meet for birthdays, backyard barbecues and funerals. But traipsing through the timeline of the universe has brought them back to the same old problem. Namely, the death of the planet via nuclear annihilation.

AltPress spoke with the major players responsible for bringing TUA onto your favorite streaming service. Showrunner Steve Blackman explained his unique take on the Hargreeves’ family dynamic and why they exchange more dialogue than your typical Marvel movie cast. Executive producer Jeff F. King offers a glimpse into the collaborative working relationship his team had with Way and Bá. VFX editor/associate producer Everett Burrell discusses the challenges of making the end times truly the time of your life.

Naturally, we have exclusive interviews with the seven Hargreeves “kids.” Page talks about Vanya’s search for self, spanning seasons and transcending decades. Tom Hopper (Luther, Number One) reveals his character’s coming-of-age story, being thrown into the deep end of adulthood and having to get a real job to pay the bills. Aidan Gallagher ponders being a 58-year-old assassin trapped in the body of a teenager. David Castañeda (Diego, Number Two) kicks all the ass on screen and does it in a way that’s completely original. (No Wolverine or Batman moves for him, thanks.) Emmy Raver-Lampman (Allison, Number Three) fights more than just supervillains and with her siblings, focusing on how important the role is for her this season. Robert Sheehan (Klaus, Number Four) discusses his character’s newfound ’60s perspective, going from the train wreck of addiction to becoming a worship object. Justin H. Min (Ben, Number Six) recalls the freedom he felt embellishing the character seldom seen in the comic, thereby making it resonate brighter.

In honor of the Hargreeves family, we couldn’t resist jumping through time to find out what might lie ahead. (That is, should there be a third season.) We have some firsthand scoops of what we might be seeing in the future.

Naturally, given Way’s musical background with My Chemical Romance and his solo career, the soundtrack to The Umbrella Academy has some sonic surprises in store. Only Way could turn lyrics about the end of the world (“Here Comes The End”) into the song of your summer. Music supervisor Jen Malone told us which key elements go into the show’s soundtrack.

If you’ve ever cracked open one of the Umbrella Academy graphic novels, sought out a variant cover or simply binge-watched the first season in a weekend, this issue of AP is essential. It’s the perfect companion for both new viewers and die-hard stans. Did we mention the beautiful behind-the-scenes photos, portraits and action-packed images from the series? Not to mention the two incredible covers that will sit perfectly in the shrine you will inevitably build to the show.

So brew up a fresh pot of coffee. Make yourself a peanut butter and marshmallow sandwich and get cozy with your mannequin companion. Season 2 of The Umbrella Academy is coming soon. But AltPress has everything you need to know, first here…