Inspired by a love for the ocean, Third Eye Blind have their sights firmly set on “green” tours.

Third Eye Blind recently announced another monster tour, this time hitting the road with Jimmy Eat World. Despite the lofty expectations that come with a large-scale co-headliner, 3EB frontman Stephan Jenkins intends for his goals to transcend ticket sales.

Inspired by a love for the ocean, the band have their sights firmly set on green initiatives for tours, looking to build on their successful efforts each year. What began as simply eliminating plastic bottles has turned into a war on CO2 emissions.

Jenkins, a devout surfer, was inspired by the stories of pollution’s effect on ocean wildlife—specifically sea turtles, which frequently suffer from plastic straws being caught in their nostrils.

Despite not necessarily being in a genre known for its political outcry, he’s looking to raise important questions through his platform.

“Even though our music isn’t punk, our ethos is,” Jenkins says. “That image of this ancient and vulnerable animal that I’ve been in the water with being subjected to this disgusting convenience. It just got me.”

The band’s initial effort, the elimination of plastic on tour, netted a substantial amount of waste from being cast into nature, Jenkins says.

“We ended up saving something like 16,500 plastic bottles that would have ended up in a landfill or the ocean and end up staying there long after we’re dead,” he explains.

The singer’s love of surfing has extended even further past initiatives to keep the ocean clean. Jenkins was awarded for his work with the Jimmy Miller Foundation in May, helping veterans suffering with PTSD learn how to surf as a form of therapy.

Through surfing, Jenkins and the foundation assist active-duty Marines who deal with depression, insomnia and other issues that follow after spending time in the military.

“It’s a product of asking more of human beings than they can tolerate,” he explains. “We do it year after year, and these deployments go on and on. Those of us who don’t serve should be doing things in service of those who do.” 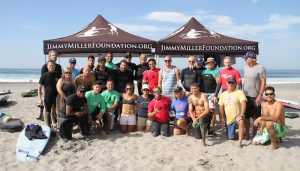 Jenkins says surfing and the ocean’s effects play on factors that help “bring them home.”

“We don’t actually do any therapy,” Jenkins elaborates. “We just teach them surfing, and the ocean provides the therapy. I knew for myself [that] surfing gives you this presence and brings you into a state of focus and connection where the distance between mind, body and the natural environment that you’re in disappears.”

While the trend of “green” tours are becoming more and more popular among large acts, Third Eye Blind were one of the initial players in the movement.

Jenkins wanted to go further, though, and was nudged by a fan who referenced Pearl Jam’s initiative to not only reduce waste, but also the carbon footprint that comes with a large number of fans traveling to shows.

The band work with a service that estimates the carbon footprint from fan travel and now donate a percentage of their profits to offset the CO2 damage that comes with touring. At the end of the day, however, Jenkins wants to make sure the message is being relayed through performances.

“It all ends up onstage. The whole idea of playing live is this collective experience of a common joy,” he says. “I think knowing this, encouraging people to find their way and be part of the solution just ends up with the experience of everyone at the show.”

Third Eye Blind may be particular with their tourmates, but Jenkins believes the bands on the road with them this summer will jell with the message and performances perfectly.

“We have really different audiences, but we think that they’ll dig on each other,” he says. “We’re really careful about who we bring out on tours. We want to have bands that really ‘play live.’ It’s really different than playing along with your Macbook.”

If you’d like more information on the Jimmy Miller Foundation, details on their initiatives can be found here.

Third Eye Blind kicked off the Summer Gods tour Friday in Los Angeles. Tickets are on sale now, with a full list of dates below.