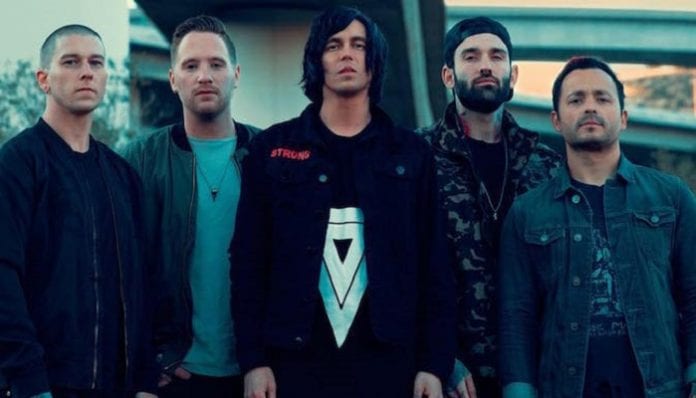 The official Sleeping With Sirens account and all of the band’s members have all completely wiped their Instagram pages, sparking major speculation among fans.

All five Sleeping With Sirens members — Kellin Quinn, Jack Fowler, Gabe Barham, Justin Hills and Nick Martin—completely deleted all posts from their feeds, as well as the band’s main account.

A few fans pointed out the weird move on Twitter, which Fowler retweeted.

“what’s going on? Is it because of the new album? Tell me what you are not going to separate :(?” the fan wrote.

It’s unclear what’s going on with the band, so we’ll just have to wait and see what all of this could mean.

Earlier this week, Quinn took to Instagram to share a photo of some new microphones, but it may also hint at their new album cover.

The vocalist posted a photo of two mics he’ll be using on tour, one bright blue and the other red and white.

Quinn’s caption has us excited to see what the new album art could look like, though it clearly has to do with the colors.

“Gotta match that new album art! Thanks @telefunken_mics stoked to use these all summer!! @rockstardisrupt” his caption reads.

As previously reported, Sleeping With Sirens possibly hinted at a new album after wrapping up their tour with Good Charlottelast year.

Their guitarist Nick Martin shared some thoughts on the Gossip-era and suggested something for this year.

“The end of a tour & an album cycle is always a wide range of emotions. I feel everything from happiness to sadness to appreciation,” he reflects. “…but also the fear, which I thrive off of.”

At the end of a long Twitter thread, Martin finished off by writing “Sirens 2019.”

Then, in April Quinn confirmed we would be getting new material soon.

“I listened to our new album all the way through..and fuck! I’m so excited to show all of you!” Quinn wrote on Twitter.

I listened to our new album all the way through.. and fuck! I’m so excited to show all of you!

What do you think Sleeping With Sirens could be planning? Sound off in the comments below!