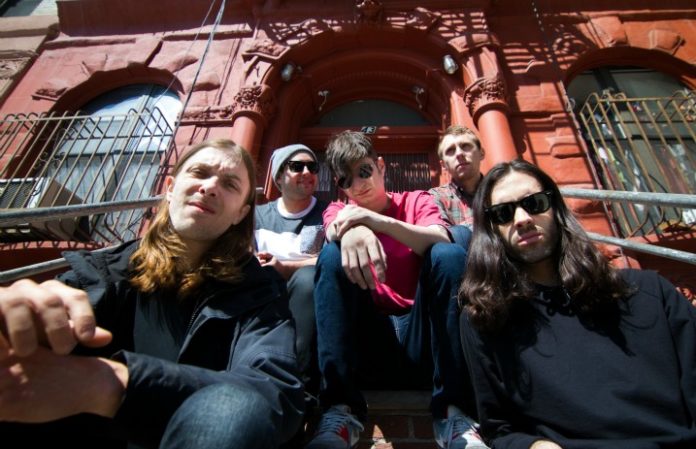 The pop-punk universe compressed a bit yesterday with Man Overboard‘s unexpected announcement that they’d be bidding fans “farewell for now.” The timing comes just seven months after the release of Heavy Love, their fourth studio album, and a plum spot on the 2015 Vans Warped Tour Main Stage, but the band stress there’s no bad blood among them. To help listeners cope with the news, the quartet will be performing eight shows this April across America, which they promise will be a collection of fan favorites—and maybe include some songs they’ve never played live before. On the day the news broke, ManO guitarists Justin Collier and Wayne Wildrick chatted with AP about what led to this point and what the future holds.

How did you end up at this decision?

Justin Collier: Here’s the thing: We definitely don’t want to call it a breakup or a hiatus. We did Warped Tour last year, then we did that Suppy Nation tour with the Story So Far in Asia and Australia. Nik [Bruzzese, vocals/bass] had to get surgery on his other knee; he’s had two torn ACLs. We had some time off, and I think everybody felt it was a good time to do some other things for a bit. Some people got married, some people bought houses, some people are doing other things. Nobody wants the band to end forever or break up forever. It’s not some crazy, tragic thing. We’re all still friends. I just think some bands fall off the radar and don’t do anything for a while—and that’s cool—but I think us not having toured for a while, we wanted to let people know these are going to be the last shows for a minute. Come out if you want; otherwise, we’ll see you down the road. We’re making it very clear that we’re not going away forever. We’re just doing some other things, and we’ll be back.

When did the talks start?

Wayne Wildrick: It all kind of starts to blur together. I guess we started talking about when we were talking about what we wanted to do for the rest of [2015]. We came off of Warped Tour and went right back out on tour. I think somewhere in there is where we started talking about it more. We did Heavy Love, and we’re all really proud of it. We went back out on tour and pushed it and played it, and it’s like, “What do you do? Go back in and write another record?” What’s a punk band supposed to do? Bands are bands for longer periods of time these days, but music is different now. It’s not like the progressive bands that came up in the ’60s or ’70s like Pink Floyd or the Who that evolved into this other band. It’s hard to do now. You have to make music while you can and know when to step back and let it have some perspective. I think a lot of bands do that at the right time, and a lot of the bands we grew up looking up to did that at the right time. We all sat around and looked at each other and thought now would be a good time to let the band be.

What are the post-Man Overboard plans?

Collier: I’ve been living in Spain, and I have a company called JXR that does merch and web stores. I also work at a management company as well. Nik has a recording studio in New Jersey where we recorded all our demos. We did “Love Your Friends, Die Laughing” there and some other stuff. He’s moving that studio to a bigger space with Ace Enders from the Early November, so they’ll have a combined studio. They’re starting building that next week, so he’s got his hands full. Right now Zac [Eisenstein, vocals/guitar] is working on a wrestling league in South Jersey. He’s a wrestling referee—like WWE-style wrestling. He recently started putting together his own wrestling league, and they’re going to be putting on their own events in South Jersey. You’ll be able to stream it online and buy DVDs. It’s probably not the first thing a fan of our band would think of us doing during a break. [Laughs.]

How do you begin a new chapter when your identity has been tied to this singular thing for the past eight years?

Wildrick: Honestly, it’s all kind of new. I feel like maybe it’ll feel different after we play the shows. We’re all friends and neighborhood kids first. Band or no band, that to me is more of our identity than anything else. We played music, but we were friends first. I think each of our individual selves is what made the band up. It all feels kind of the same; life is kind of the same.

Collier: Today’s my 27th birthday, and I’m the youngest guy in the band. It’s either we can do this forever—well, I don’t think it’s realistic to do it forever—but one day you wake up a certain age and go, “I don’t know what I want to do for the rest of my life.” When other people are nurturing new things in their lives, you need to nurture those things like you did the band when the band started. Everybody still loves doing the band, but right now we’re just focusing on some other things. But we’ll be back, whether that’s a full U.S. tour or some holiday shows in a year or two.

I imagine stepping back from it really allows you to put things in perspective and see how far you’ve come over the past seven years.

Wildrick: When you’re in a band, you start to think, “Oh, I go to Europe two or three times a year.” Now, you think about these places… we’re playing these upcoming shows, but I might never go back to the west coast again. I had no right being there to begin with. [Laughs.] We ended up in all these far-off, exotic places, and it definitely starts to set in. That’s what being in the moment means. We never said no to a single opportunity, whether it was around the world or a mile down the road. We can step back and look at all the hard work and remember we’re a few dudes who crossed paths in the neighborhood and started a band.

Collier: When you first start out and you get to go to California for the first time or England for the first time, everything feels really special. But I’ve toured Europe 13 times or something. Thirteen’s not really that different than 12. Instead of going to Europe two or three times a year, I’d rather go once every other year to have everybody really excited and up for an adventure. At the same time, I want to have fans be really stoked it’s been so long since we were there, rather than, “Oh, it’s October, and I just saw them in March.” Being a fan of bands myself, I was the same way growing up: “Oh, they’re coming back again and playing a big venue supporting someone? Maybe I won’t go to that one.” It loses that special feeling for fans and the band. Everyone’s just letting it breathe a bit now.

You haven’t started planning the reunion tour yet?

Wildrick: [Laughs.] We really have no rules in place in terms of [a timeline]. There’s no hate, no animosity between us. We’re going to play these shows and make it really special, then step back for a bit. But if a friend of ours picks up the phone and is doing something special and needs a band, we’re not going to say no. This band has always been about its own rules and the things we want to do. ALT