Though known for his vocals in Dance Gavin Dance, Tilian Pearson has been delivering his own pop anthems with his solo project since 2013. It’s been over two years since his last full-length, The Skeptic, and the singer recently announced the drop date for his upcoming LP, Factory Reset. Along with a brand-new music video for his latest single “Is Anarchy A Good Hobby?,” the vocalist is also sharing exclusive behind-the-scenes photos from the video shoot.

In February, Pearson dropped “Anthem” following 2020’s “Dose,” serving as the second single to be released off the forthcoming record. Where “Anthem” focused on spiritual awakenings, “Is Anarchy A Good Hobby?” highlights being released from the shackles of what haunts you.

Read more: 12 new collabs your favorite musicians have made with rising artists

Directed by Katharine White, the video features Pearson singing the track alongside several dancers. As he flows through the verses, the dancers move around him, eloquently pushing and pulling at each other with every dip. With no technical treatments, the artists are left to deliver the track’s interpretation without being overshadowed.

Factory Reset drops April 23 and is available to preorder via Rise Records. Check out the exclusive behind-the-scenes gallery of the “Is Anarchy A Good Hobby?” shoot with photos by Paige Margulies as well as what Pearson has to say about his upcoming record below. 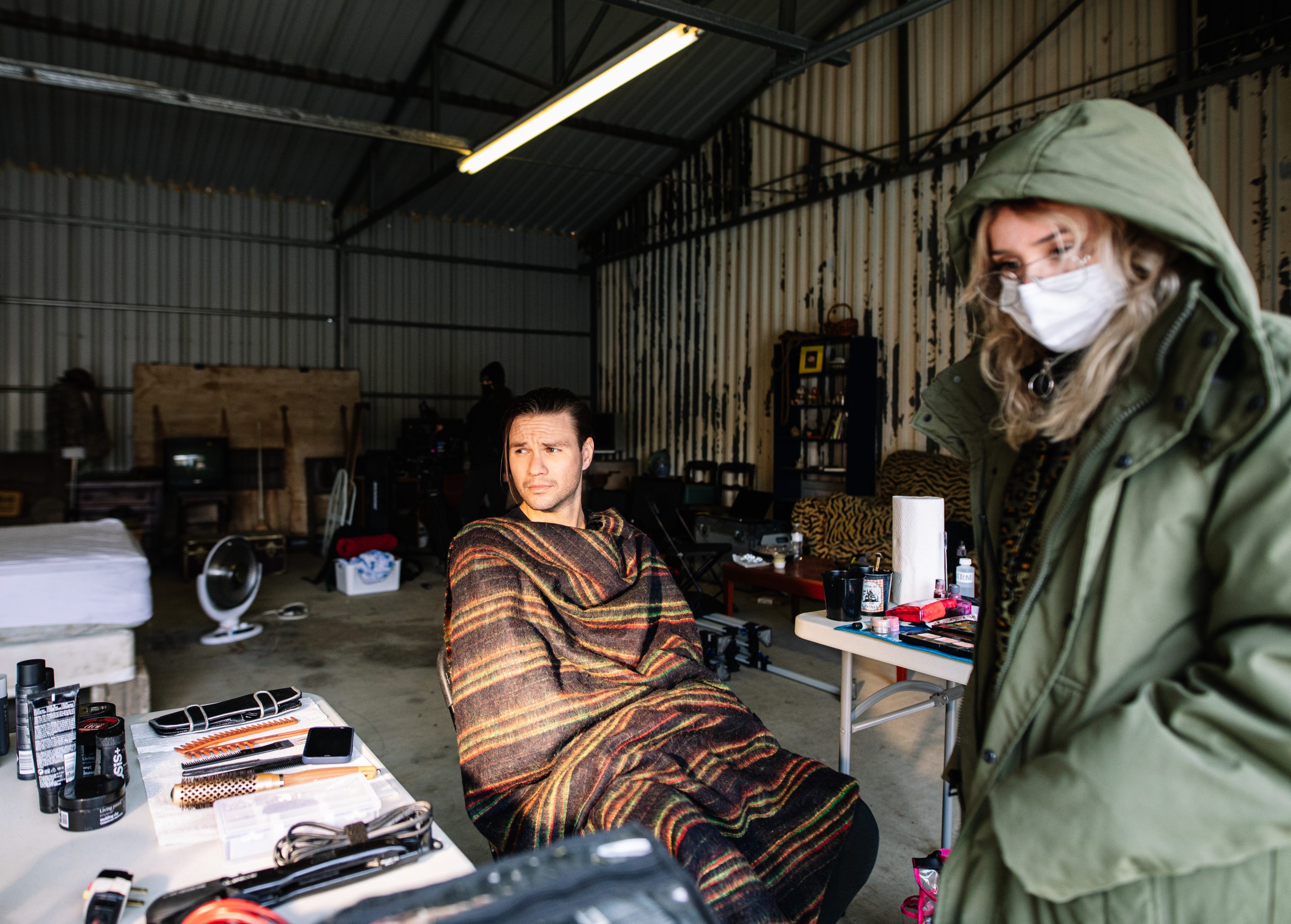 As far as your music videos go, “Is Anarchy A Good Hobby?” is one of the simpler ones. It’s shot in a warehouse with just you and a few others on screen, and there aren’t any fancy lights or technicalities, but it fits with the overall sound of the track. How did this shoot compare to previous ones? Is there a certain style of video you prefer over another?

The shoot was a blast and had great energy. It was freezing cold in that warehouse, and we were all trying our best to warm up in between takes.

To answer your question, to me it’s more about the final product, and enjoyability on the day of completely depends on the vibe of the crew and confidence in the art. Katharine White makes beautiful videos, and I completely trusted her, so the fact that it was “simple” never crossed my mind until you asked the question.

Where did the video concept for “Is Anarchy A Good Hobby?” come from? What were you and the team inspired by while working on the treatment and final cut of the video?

I gave Katharine a single reference photo, and she ran with the rest of the idea, so I think it was a mixture of watching her videos, feeding off the vibe of the song.

For your last single “Anthem,” you said it was “the release of energy that follows a sacred epiphany.” How do you describe the release for “Is Anarchy A Good Hobby?,” and where does it fit in the scheme of the rest of your upcoming album?

“Anarchy” is about a different type of a release of energy, the sometimes twisted euphoria that washes over you after you destroy something in your life that you felt was holding you back.

In the music video, several dancers are seen fighting and in, what I interpret as, distress. How do their movements enhance the meaning of the track?

The fighting was Katharine’s interpretation of the lyrics, and I loved the idea.

While Dance Gavin Dance have their own eclectic sound, it’s still very hardcore. As a soloist, you’re able to express yourself using pop and brighter instrumentals but still manage to include heavy elements, such as in “Dose.” When writing a track, how do you decide what it’s going to sound like? What’s your process?

On this album, I tried to let go of stylizing everything similarly and just make the music I want to hear. With all of my influences and music I’ve heard in my life, I still feel like something is missing from that discography, and I’m trying to fill that void. I’m not saying that is the case with every song, but it’s something I am leaning toward more and more.

My process on this album was to sit in isolation, pick up an instrument and go. As an introvert, honestly, I think I’m happiest when I’m writing and recording. I’m unbelievably lucky and extremely grateful [that] I get to do what I love and dictate my own terms.

This will be your fourth solo LP and comes over two years after The Skeptic. In what ways have you grown since that first release? Is there anything you would do over or feel you could do better still?

Each era had a vibe, and I don’t have any regrets in my discography. I feel like working on Factory Rest blew open a door creatively, especially while writing the last few songs—not on the tracklisting, just the last few songs [that were] written. Keeping that momentum going, I’m actually deep into LP five, and I’m loving the ride.