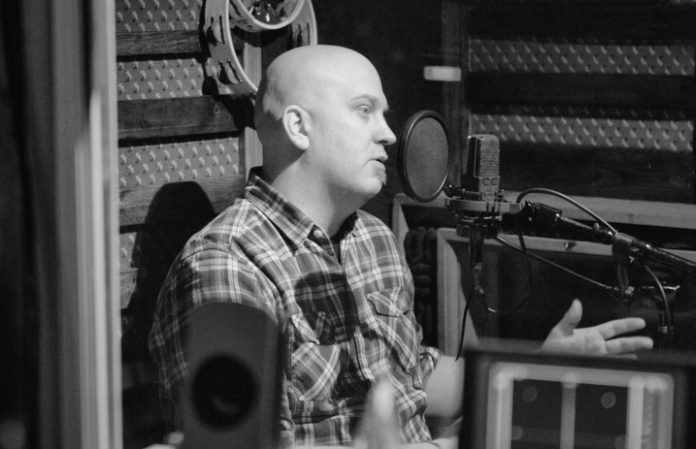 What do you do when your local punk scene is all you know? Make a living out of it. Tony Rettman was just another kid at the show, now he’s a bonafide hardcore scholar. He’s published two books, Why Be Something That You’re Not: Detroit Hardcore 1979-1985 and New York Hardcore: 1980-1990, and is now ready to invade your earholes with his latest project, Green Room Radio. Produced by the studio of the upcoming indie/punk horror flick Jeremy Saulnier’s Green Room, the hour-long show provides an inquisitive conversation with people who were, and continue to be, the salt of the industry.

How did you get into radio?

I did radio shows back when I was like 14 years old at a college radio station near where I grew up in Trenton, New Jersey. I DJ’d on WPRB, which is a Princeton University Station, and about 10 years ago I was doing radio on WFMU in East Orange. But mostly I concentrated on writing, that was the main focus for me and the radio thing came in and out of the picture.

The Green Room Radio that I’m doing now is a little different in the way that it’s a full on interview program. There’s just one or two sets of music, and it concentrates more on covering that artist’s background and how they got into punk rock and where they are now, rather than just playing records. Sitting in a room by yourself playing records can get a little depressing. [Laughs.] At least there’s a little interaction when you’re doing stuff like this.

What storytelling techniques do you use when you’re producing content for radio, and how is it different from your print background? What sort of stuff do you have to watch out for?

I do a lot of research, and I’ve been writing a lot about this kind of music—like punk and hardcore and underground music—for a long time now, so I already have a working line of research in my head that I can reference back to. It’s almost the same thing as the writing or the books that I’ve done in that it’s just a matter of getting the right story out of a person. Obviously not coaxing any kind of dirt or anything like that, it’s more about a natural conversation than just trying to get some sound bites out of people.

“People have to realize this was a springboard for a lot of people who pack stadiums now. If you want to throw out names… Dave Grohl and Bob Mould and 90 million other bands. Bringing it to the mainstream is to shed a light on it; this is an important part of American culture.”

The mantra of the radio show is “bringing hardcore punk to a broader audience.” Why do you think that needs to be done?

It seems like every 10 to 15 years, a certain genre of music has been sitting on the shelf long enough that people recognize it and give it a pat on the back. It’s almost like getting a gold watch when you retire, like, “Hey, you’re culturally relevant now.” It seems like that’s happened to hardcore for the past 10 to 15 years. And bringing it to a wider audience, whether they like it or not or they think it sounds like garbage or whatever, it’s something that has to be recognized as important in American culture for the past 30 to 40 years. People have to realize this was a springboard for a lot of people who pack stadiums now. If you want to throw out names, it’s been a springboard for Dave Grohl and Bob Mould and 90 million other bands. Bringing it to the mainstream is to shed a light on it; this is an important part of American culture. There are also people who still live it and play that music, bands like Agnostic Front; it’s still a way of life to them. That’s why I think it’s important to show people what this music is about.

Do you remember the first song or the first artist that you heard that inspired you to be involved with music for the rest of your life?

It’s funny that you should say that because whenever I interview somebody and they tell me a story like that, I think it’s total bullshit. [Laughs.] Looking back now, I guess there are a few moments. This might not make me sound like the most sane person in the world, but I remember the first hardcore punk show my brother ever took me to. I was like 11 or 12-years-old, and it was a Black Flag show. A week or two before that something happened out in California where some guy went into like a McDonald’s and just started firing a gun and killed a bunch of random people. So at that Black Flag show, Henry Rollins said something in-between songs like, “Hey did anybody hear about that thing that happened where we live, where the guy went in and shot up that McDonald’s?” and he was like, “Wasn’t that fuckin’ cool?” [Laughs.] and the whole crowd was like “Yeah!” I just remember being at the back of the hall standing on a chair being like, “Wow I’m around a bunch of fucked up people,” and strangely I felt comfortable about that. These are people who have just as sick a sense of humor as I do. You know as an adult I can see how that wasn’t funny, but that was like a moment where I can say, “I’m around people who are just as fucked up and confused and have as a sick sense of humor as I do.” So that’s one moment. It wasn’t until much later in life when I heard a lot of more extreme music like Sonny Sharrock or Amon Duul. When I heard stuff like that it was like, “Man, punk rock is bullshit.” [Laughs.] “These guys don’t even want to write a song, they’re just going for it.”

You can find past episodes of Green Room Radio here. Check out the latest episode below: