twenty one pilots are fully engrossed in the Trench era, and we are so here for it. The band recently wrapped the first U.S. leg of their Bandito tour. Luckily, we didn’t have to wait long to immerse ourselves in that world again.

The duo partnered with Spotify for “Bandito Immersive Experience,” unleashing the world on fans yesterday. With a goal of discovering five encrypted symbols, the experience revealed a lot about DEMA and the trench. 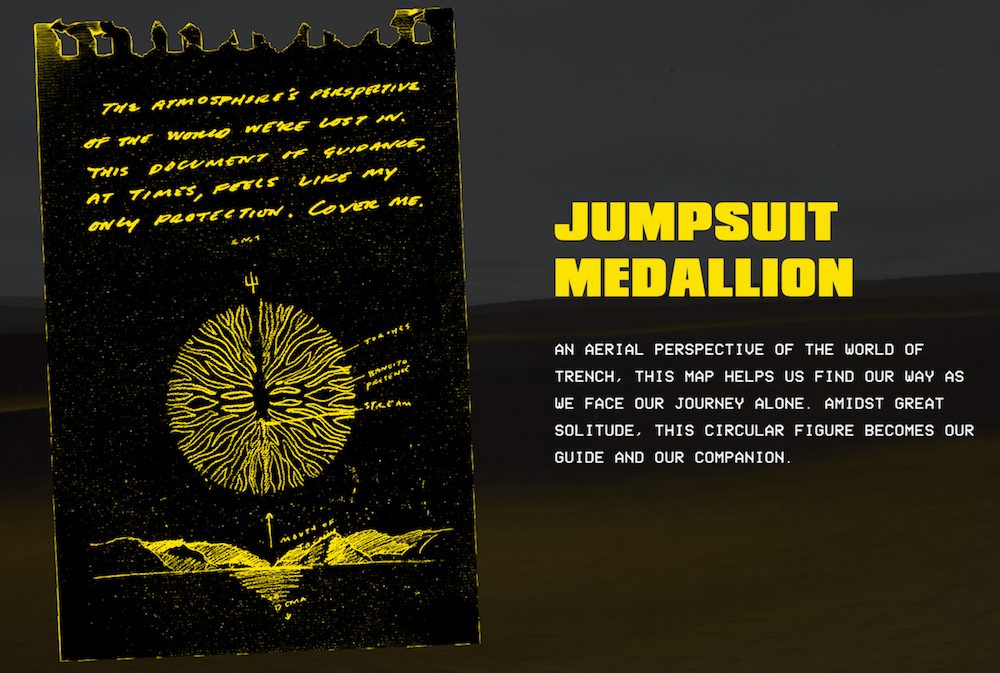 Jumpsuit Medallion is the first encrypted symbol to discover. It’s found in an area with smoke stacks and stairs that we first saw in the “Nico And The Niners” video (perhaps suggesting that NATN is indeed the first chapter of the Trench trilogy). The description reads: “An aerial perspective of the world of Trench, this map helps us find our way as we face our journey alone. Amidst great solitude, this circular figure becomes our guide and our companion.” 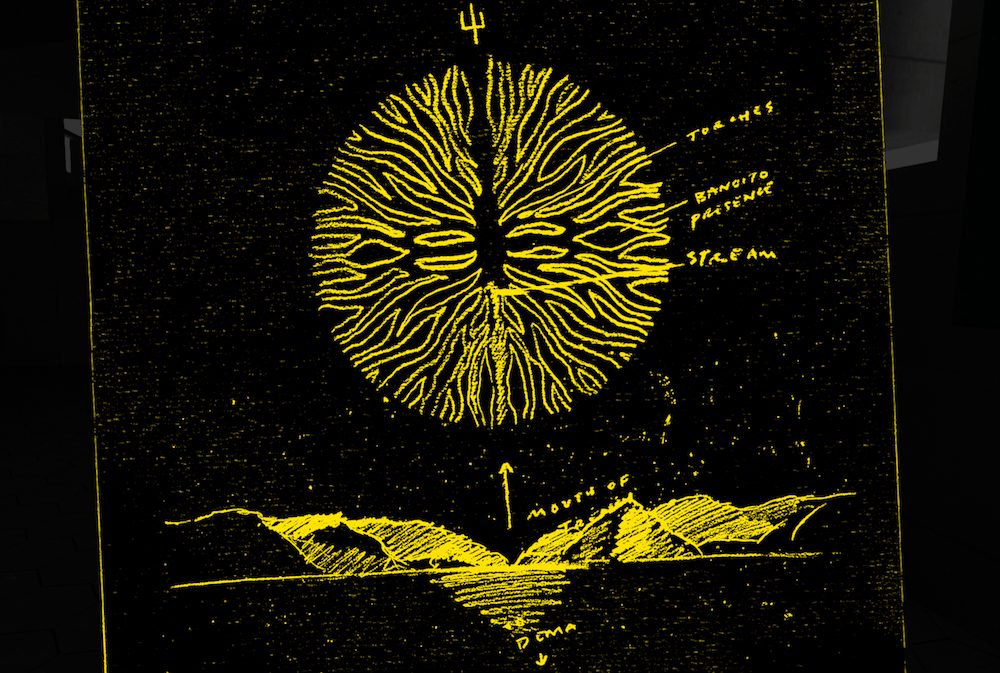 Upon closer inspection, it references “Jumpsuit” lyrics, reading: “The atmosphere’s perspective of the world we’re lost in. This document of guidance, at times, feels like my only protection. Cover me.” The map itself outlines the mouth of DEMA, a stream, Bandito presence and torches. You can also see a representation of the next symbol, Compass E Pitchfork. 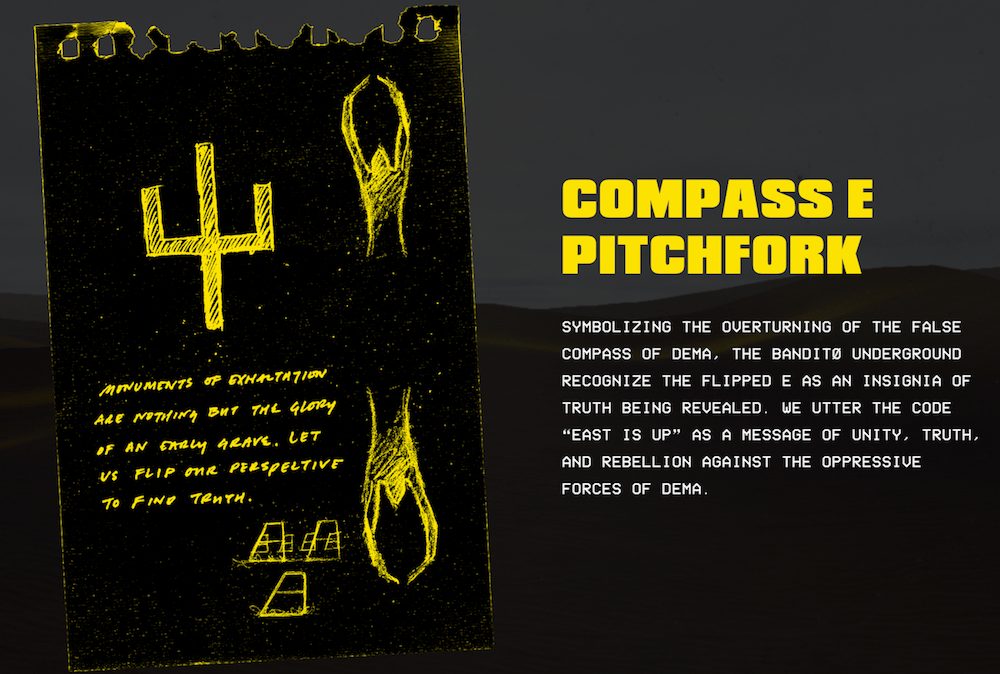 After passing the statue and traversing through a tunnel, both of which appear in the “Nico And The Niners” video, the Compass E Pitchfork is discovered in an open area of land. It references “Nico” lyrics reading: “Symbolizing the overturning of the false compass of DEMA, the Bandito Underground recognize the flipped E as an insignia of truth being revealed. We utter the code ‘East Is Up’ as a message of unity, truth and rebellion against the oppressive forces of DEMA.” 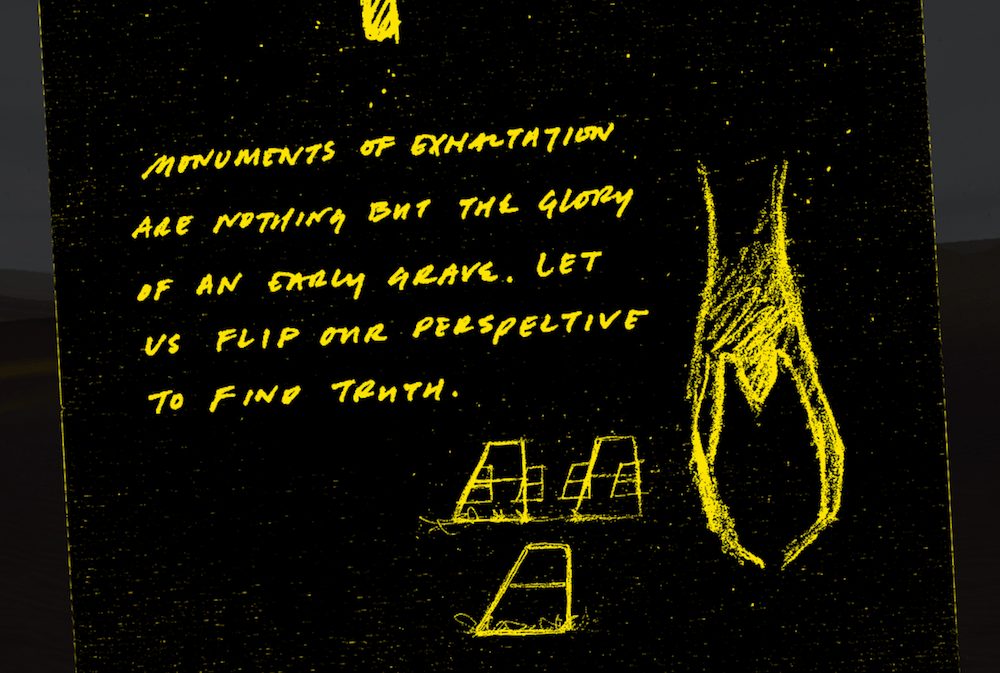 The symbol itself states, “Monuments of exhaltation [sic] are nothing but the glory of an early grave. Let us flip our perspective to find the truth.” Upon closer inspection, we can see that by “flipping our perspective,” twenty one pilots’ Trench era logo appears, leading to the next symbol.

Appropriately, the next symbol is the Double Bars Logo, and it’s found among the Banditos, gathered around the car on fire like in “Levitate,” potentially confirming this as the second chapter in the Trench video trilogy. It reads: “Steadfast in our rebellion against the teaching of vialism, we turn their false doctrine upon its head. Protected more than ever, the double bars are a symbol of life and hope.”

“Vialism” was referenced on dmaorg.info and in “Nico And The Niners.” In one part of the track, the music and lyrics become distorted. Once reversed, you can hear, “We are banditos. We will leave DEMA and head true East. We renounce vialism.”

Zooming in, the card reads: “The necropolis glorifies the early graves of those who lost themselves along the way. Let us overturn this concept as a symbol of dedication to and celebration of life.”

TOP previously discussed the importance of their new logo. Tyler Joseph explains that it’s a representation of some of Trench’s lyrics, and the feeling of protection: “The feeling of being surrounded by something that’s protecting you…I knew I wanted that logo to have those extra layers of protection,” he explains, discussing the extra slashes on either side.” 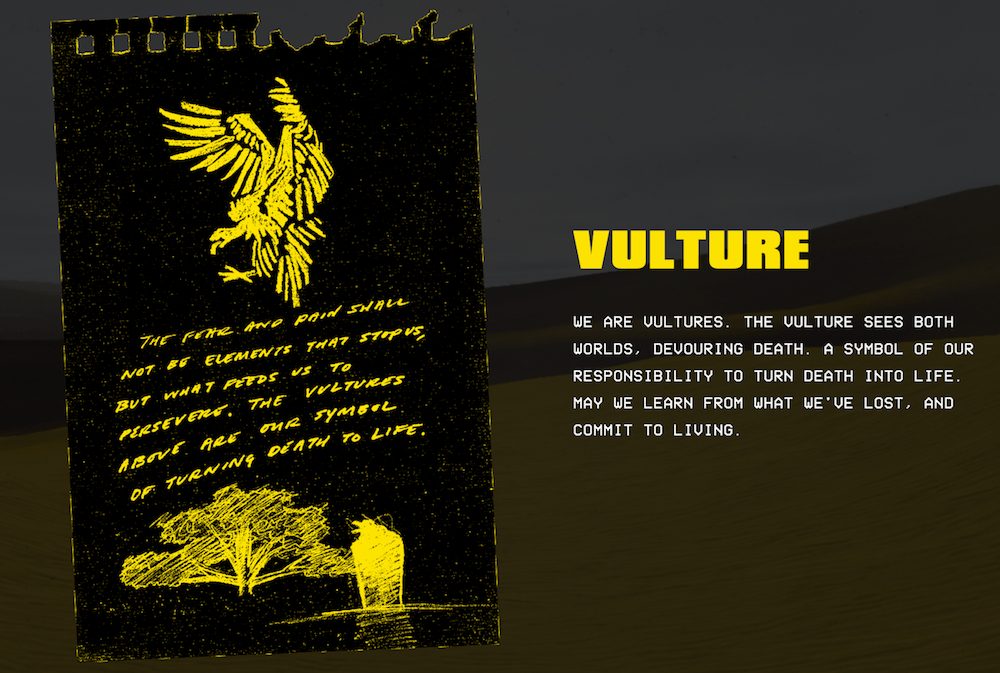 The next symbol is discovered in another vast area of land. It offers more perspective on the importance of the vulture, a bird that appears on Trench’s cover and throughout their music videos. The symbol states: “We are vultures. The vulture sees both worlds, devouring death. A symbol of our responsibility to turn death into life. May we learn from what we’ve lost, and commit to living.” 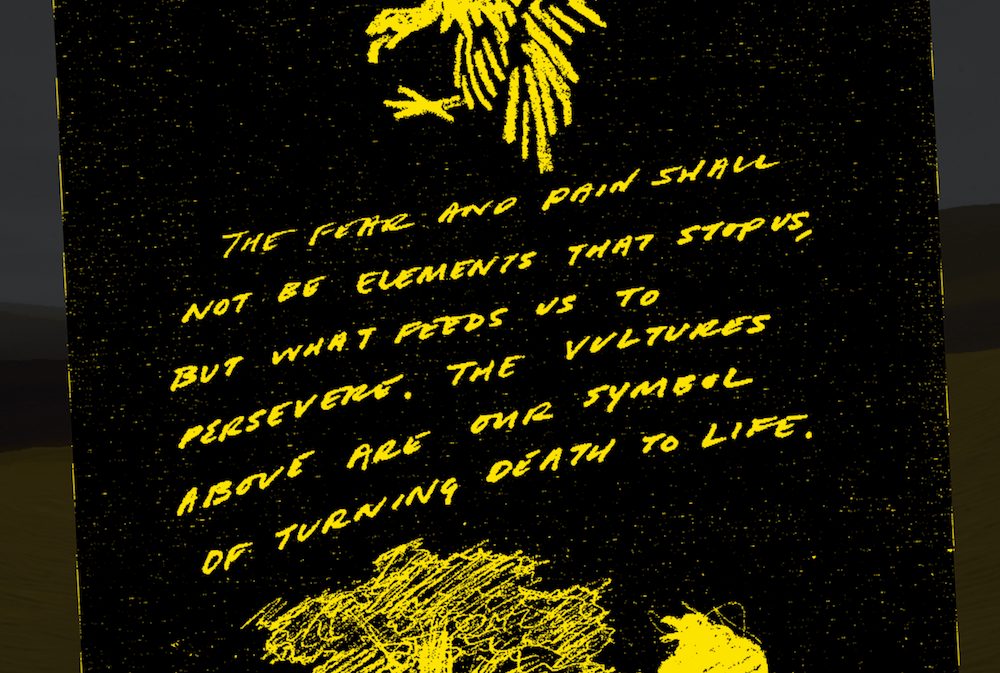 Zooming in, it reads: “The fear and pain shall not be elements that stop us, but what feeds us to persevere. The vultures above are our symbol of turning death to life.” 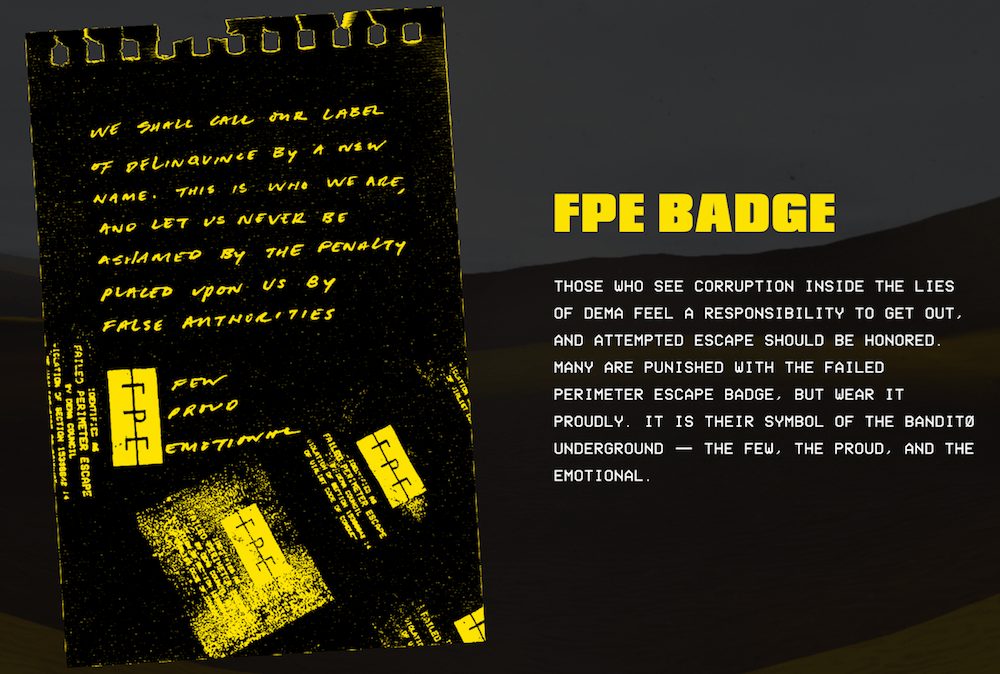 The FPE badge is up next, and it’s found in—you guessed it—a trench much like the one in the end of the “Jumpsuit” video, in turn closing out the Trench video trilogy.

The symbol refers back to the Bandito Underground, first mentioned in the Jumpsuit Medallion map. It states: “Those who see corruption inside the lies of DEMA feel a responsibility to get out, and attempted escape should be honored. Many are punished with the failed perimeter escape badge, but wear it proudly. It is their symbol of the Bandito Underground—the few, the proud and the emotional.” 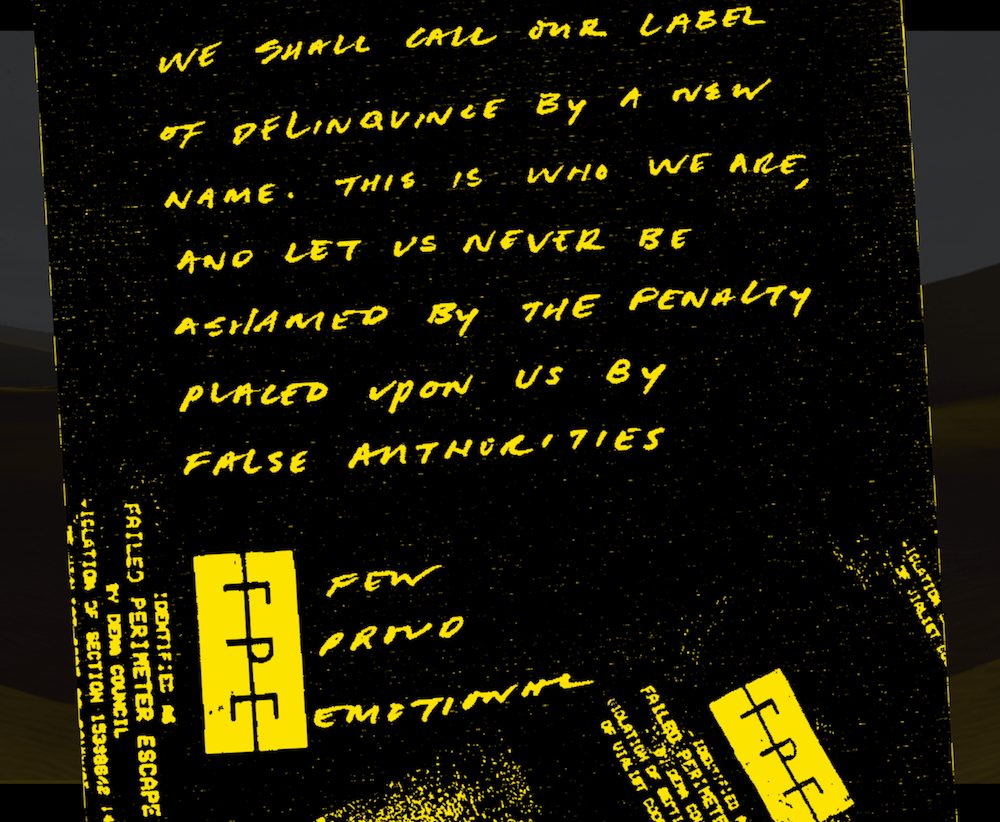 Once zoomed in, the symbol states: “We shall call our label of delinquince [sic] by a new name. This is who we are, and let us never be ashamed by the penalty placed upon us by false authorities.” The comparison was pointed out by a fan after looking at dmaorg.info. While it stands for “failed perimeter escape” badge, the Banditos reclaim it as the few, the proud and the emotional, which first appeared in the Blurryface-era track, “Fairly Local” (“Even if my clique were to pick and the people were to vote/It’s the few, the proud and the emotional”).