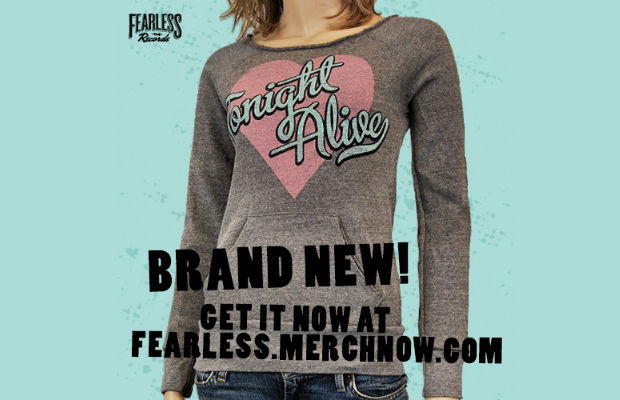 Red and pink everywhere, those chalky, heart-shaped candies that no one actually wants, flowers—ugh. ‘Tis the season. Love is in the air, and there’s no avoiding it. So, if you can’t beat ‘em, join ‘em on February 14. Here’s a list of love songs to get you feeling all hearts-for-eyes.

Because Valentine’s Day is tomorrow, AP and Fearless Records wanted to add a little extra sweetness to this lovey-dovey list with a sweatshirt giveaway. As you listen, scroll to the bottom and comment “I <3 Tonight Alive” for a chance to win the band’s new heart sweatshirt [pictured] for yourself or for your beloved! Winners will be chosen tomorrow, February 14, 2013.

Dearly missed Seattle pop-rockers Acceptance wrote one of the best falling-for-you songs with “So Contagious.” It digs deeper than being surface-level-smitten about someone; it’s about the risks of love and taking a chance on someone even when that seems like a crazy idea. The power-ballad-worthy chorus is Jason Vena at his most vulnerable and unforgettable. “Could this be out of line?/To say you're the only one breaking me down like this/You're the only one I would take a shot on/Keep me hanging on so contagiously.” Try not to sing along—you can’t. [BK]

Without oversharing, I’m going to simply state I would be more excited about having several impacted wisdom teeth removed than to celebrate Valentine’s Day this year. Hence, the bittersweet “Push,” which is not only in my top five favorite songs by Robert Smith & Co., but also articulates post-breakup malaise quite artfully. Our vertically follicled hero begins by pleading with his ex-love to get the new lover out of her life before turning all jealous stalker-azzi (“He gets inside to stare at her/The seeping mouth/The mouth that knows /The secret you/Always you”), before telling her in no uncertain terms to “Smear this man across the walls/like strawberries and cream/It’s the only way to be.” (I always thought it was the man’s job to beat up the new boyfriend. Sadly, I don’t drag my knuckles when I walk.) Further complicating things is the song itself, a brisk slice of upbeat guitar-rock that sounds life-affirming and majestic—if it were an instrumental. You may think my entry undermines this ooey-gooey, lovey-dovey playlist: I’d like to remind every last one of you reading this that if you don’t have that chapter in your life dedicated to The One That Got Away™, well, you haven’t really lived. [JP]

Dashboard's famous “Hands Down” is brought to life not only by its plugged-in treatment, but the way it perfectly captures love at first sight and having nothing else matter. Chris Carrabba sings of fulfilled hope as he describes the best date of his adolescence in a way so believable you feel it, too. That initial emotional risk is played out in the cautious verses (“These hearts they race/From self-control”), making the story all the more sweet when it finds a happy ending of two young lovers on the same wavelength (“And you kissed me like you meant it/And I knew that you meant it”). [BK]

With their lyrics about love gone wrong (and oh-so-right) and Ace Enders’ amazing voice that can go from acoustic ballad to guitar-fueled-rock quicker than you can say The Mother, The Mechanic And The Path, it would be a major Valentine’s Day tragedy not to include the Early November on your playlist. The band’s discography offers plenty of love song choices, but if you want the love song, look no further than “1,000 Times A Day.” The song tells the story of how boy meets girl—in this case, I’m assuming this particular boy is Enders and the girl is his wife, Jenn. The song’s subject matter might be specific to one relationship, but its theme is universal. I dare you to find a song from this scene with a line sweeter than “Every time I see you, I still hear trumpets.” [BM]

HELLOGOODBYE – “Oh It Is Love”

On their first full-length, Zombies! Aliens! Vampires! Dinosaurs!, Hellogoodbye made it their mission to write as many kooky/quirky pop songs about crushing on girls as they could. The stripped down “Oh It Is Love” is a nice change from the band’s usual kinetic energy-fueled synth pop. Armed with nothing but a ukulele and lyrics as sweet as candy hearts (“Oh say, wouldn't you like to be older and married with me?”), Hellogoodbye offer up the perfect song to woo your honey with. (Kudos if you learn the ukulele part.) [BM]

First off, you probably aren't familiar with Mando Diao, which is a shame. They're a Swedish garage-rock band who haven't toured America in something like six years (and their last few records never even came out in the U.S.), so don't feel bad about not knowing them. But change that right now by listening to this absolutely perfect love song. The lyrics are kind of clumsy, which is how love should be (example: “I said, 'Hey girl, have you seen that film with those kids in New York in the ’80s/Oh, you have—well, can I watch it with you anyway?'”), but it's all worth it for the eventual climax: “Honey, I love you/Like the summer falls/And the winter crawls/You're above and beyond me.” It's a confusing lyric, which is why I love it so much. Taken one way, he could be breaking up with the girl; taken another, he's practically down on one knee asking her to marry him. Love doesn't always make sense, and neither does this song, which is why I adore it so much. [SH]

“I’m not living, I’m just killing time.” Wherever you are, Amy Forson, call me. [JP]

TAKING BACK SUNDAY – “You Got Me”

“You Got Me” from Taking Back Sunday’s self-titled does not cheapen itself with poetics. While many love songs go the Shakespeare route, TBS frontman Adam Lazzara doesn’t dress anything up in this number as he lays out the reality of pregnancy and the role of a loyal lover. There’s no force (“You got me/If you want me”) or frills (“I was there when you were sick”)—only honest commitment to drop everything to stand by another human’s side. [CW]

This wistful song communicates that feeling of being absolutely enamored with someone to the point that his or her mere presence knocks you senseless and erases every bad thing that surrounds you. For those like me who think love is a crock of rotten noodles, it's still relatable. The chorus kick-off, “Nothing compares/To what we share,” is something we've all felt—whether about our best friend, someone special or a crowd of strangers at a concert. So, even if you don't have a “special someone” on Valentine's Day, remember those people in your life who make you feel safe and at home, and send them some love. Those, after all, are the people who won't dump you in a week. [CW]

THE WEAKERTHANS – “The Reasons”

My wife and I made this song our first dance at our wedding last fall. As we spun around the dance floor, herking and jerking awkwardly in front of friends and relatives with an '80s cover band patiently waiting for us to get the fuck out of the way, we stared into each other's eyes, grasped each other's hands and howled this song's refrain at one another: “I know you might roll your eyes at this/But I'm so glad that you exist.” Bonus: My wife has no problem telling me to fuck off when I need somebody to. [SH]