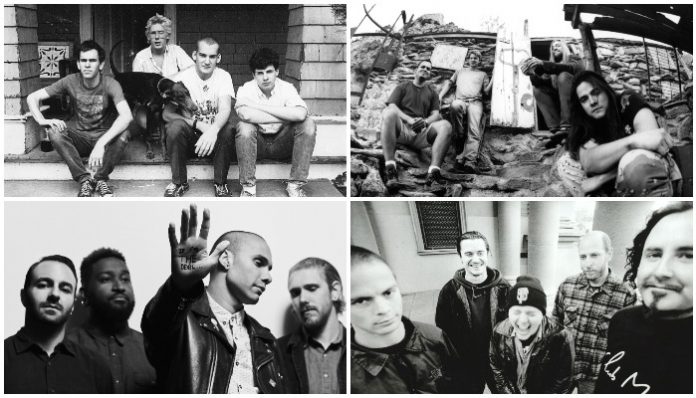 With band breakups, it isn’t always clear how influential they are or how much potential they had. Discovering a group after they’ve already broken up is often heartbreaking because you know now how great they are, but at the time, they may not have been getting enough recognition, or outside circumstances led to their disbandment.

Take a look below for some of the bands we think broke up far too early in their career. Note that the selections don’t include artists such as the Dillinger Escape Plan or Slayer, who succinctly wrapped up their careers even though we wish they stuck around.

Mathcore and metalcore wouldn’t be the same without Botch, but they were only around for a short snippet of time. Their influence can be felt in acts such as Norma Jean, Between The Buried And Me, Cancer Bats and more, but their demise falls more on the fans at the time than the band themselves. They simply didn’t receive the praise they do today when they were actually around, and unfortunately, each member has moved on to different things and will likely never reform.

The birth of djent brought seven- and eight-string guitars to the forefront of tech metal in a way that tech death and progressive metal hadn’t before, but the Tony Danza Tapdance Extravaganza were perfecting this sound long before others. The band got better with each new release, and while their fourth record is still one of the best mathcore albums of all time, they put it out without even playing a single show to support it.

Iwrestledabearonce were the laughing stock of rising bands in the late 2000s due to their name, never-ending stream of genre shifting and overall aesthetic, but as they matured and settled into their sound, it became really incredible. Their last album, Hail Mary, was a solid mathcore album without a ton of gimmicky nonsense, but just as they broke into a well-defined direction, they disappeared. Members have moved on to other projects by now, and it’s unlikely they’ll ever come back.

Although many people are enjoying the Jason Aalon Butler-fronted FEVER 333 right now, his previous venture letlive. were a vastly different project who had an interesting and unique take on post-hardcore. Their last album, 2016’s If I’m The Devil…, felt like a sour note for them to leave on, though, as their weakest album, and they  fizzled out from there, announcing their breakup the following year due to “divergence in views and aims.”

The raw, dark hardcore sounds created by Cursed are gems to listen to now, but playing in a DIY band comes with some downsides that eventually ceased their career. They pumped out a ton of impressive releases across their seven years together, but after getting robbed at the end of a European tour, they had enough of both each other and their lifestyle and went their separate ways.

Some will argue that the Chariot broke up at the exact time they should have, but their last album, One Wing, left us all wanting more. The entire release and final tour felt like they were cutting things too short, and while the members’ projects since then have been fun to watch (’68, FEVER 333), nothing was quite as great as the short time that the Chariot were around for.

While less well known than their contemporaries in the Ontario hardcore scene, Dead And Divine had a sound that other bands still thrive on. Sadly, they broke up in 2012 over hectic tour schedules, though vocalist Matt Tobin later revealed they had all been fighting with each other constantly. He’s since formed Ritual, who brought a slightly heavier take on Dead And Divine’s metalcore tones, but even that group haven’t been very active.

Read more: Before My Chemical Romance, Gerard Way got kicked out of first band for being “really bad at guitar”

A lot can be said about the countless projects Mike Patton has worked on over the years, but nothing quite touched the weird levels Mr. Bungle reached with their highly experimental sound. They tapped into death metal, jazz, funk, circus music and just about any other genre you could think of. After members started working on other projects and fought with each other for various reasons, they ended things without ever saying they were done until years later. Luckily, they’re reuniting for a small run of shows in February, but a proper reunion tour would be incredible to see.

Most know Josh Homme for his work with Queens Of The Stone Age, but his stoner-rock origins in Kyuss have carried a huge level of importance to this day. The band had a sorry ending with their final release, receiving mixed reviews initially and later being regarded as a well-made album, but it was the last straw for them, which resulted in QOTSA’s conception and a somewhat rebirth of Kyuss when three of the members went on to form Vista Chino over a decade later.

The birth of straight edge started with Minor Threat, as the band’s ultra-aggressive take on hardcore at the time was unheard of. Although we got Fugazi from Minor Threat’s disbandment, it would have been interesting to see what they came up with if they hadn’t dissolved over disagreements between members.