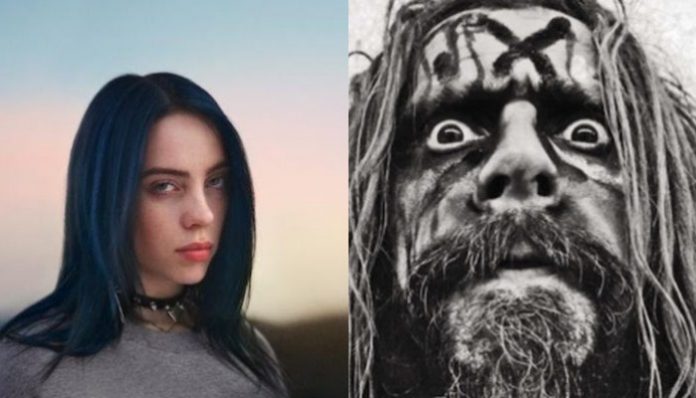 Billie Eilish received praise from Rob Zombie after sporting a custom top sharing her love for the metal scene.

Eilish recently wore a custom top that stitched together shirts from Zombie, Cradle of Filth and Type O Negative.

Read more: Gerard Way got kicked out of first band for being “really bad at guitar”

The three bands posted a screenshot of Eilish sporting the metal top and supported her fashion choice. You can see their posts below.

Eilish recently unveiled created a new beanie that uses a death metal style of font in an epic way, so it’s apparent her love of metal runs deep. The hat is available at her Blohsh store that features her name in the death metal font and the logo for Blohsh on the back.

The hat retails for $25, and comes with a free digital download of her record-breaking debut album WHEN WE ALL FALL ASLEEP, WHERE DO WE GO?. You can buy the hat here

Billie Eilish recently announced the dates for her WHERE DO WE GO? world tour, which is in support of her record-breaking debut album that you can stream below.

The tour starts in March and will continue through July as she treks from North America to Latin and South America and then across the pond to Europe and the United Kingdom. You can see the full list of her tour dates below.

A YouTube user has broken the record for the amount of likes o a single comment on the Billie Eilish music video for “bad guy”.

YouTuber Seth Everman received 1 million likes on Eilish’s video, which is the first comment to do so on the platform.

Everman recently went quite viral himself by covering “bad guy” by using a fan, an N64 and his couch as instruments to recreate a pretty accurate, and hilarious, intro.

Eilish has not acknowledged his comment victory. However, you can watch the “bad guy” video below and check out Everma’s comment while you’re there.

What do you think of Billie Eilish sporting a custom metal shirt? Sound off in the comments down below!