The 2000trees Festival has announced its next wave of bands, adding 23 more incredible artists to the already impressive 2019 lineup.

This fourth wave band announcement includes As It Is, The Dangerous Summer, Free Throw, and more!

You can check out the full festival lineup, below.

The previously announced headliners for the three-day music festival include Frank Turner, You Me At Six, and Deaf Havana.

Today’s announcement has them being joined by 23 more bands, including pop-punk five piece As It Is who will be headlining the Cave Stage on Friday.

“We are so unbelievably excited to be performing at 2000 Trees for the very first time!” says frontman Patty Walters. “2019 has been one of our busiest years in this band’s history, and we can’t wait to bring our most energetic, unrelenting set to one of the best festivals around. We can’t wait to see you there!”

Check out the recently added bands, below:

Grab tickets for TREES 19 while you can at https://t.co/C83xzKe7p0 🤘 pic.twitter.com/kJEeGYsg4Y

Attendees of the show will get a special treat as Every Time I Die will performed their album Hot Damn! in full at the show alongside other popular tracks. The critically-acclaimed album was released in 2003 and has become a fan-favorite by the metalcore band.

The festival takes place at Cheltenham’s Upcote Farm on July 11-13, and you can purchase your weekend tickets here.

Check out the full list of confirmed artists below! 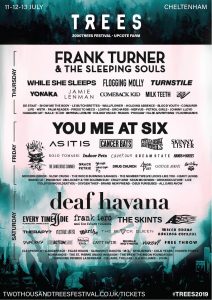 Are you excited for this year’s 2000trees lineup? Sound off in the comments below!