All Time Low fans got quite the surprise when guitarist Jack Barakat showed up on Jimmy Kimmel Live! Wednesday night.

The musician joined Bryce Vine to back up his performance of “La La Land.”

Barakat took to his Instagram stories ahead of the performance to share he would be joining Vine.

“Performing with my homie @brycevine on @jimmykimmellive tonight,” he wrote. 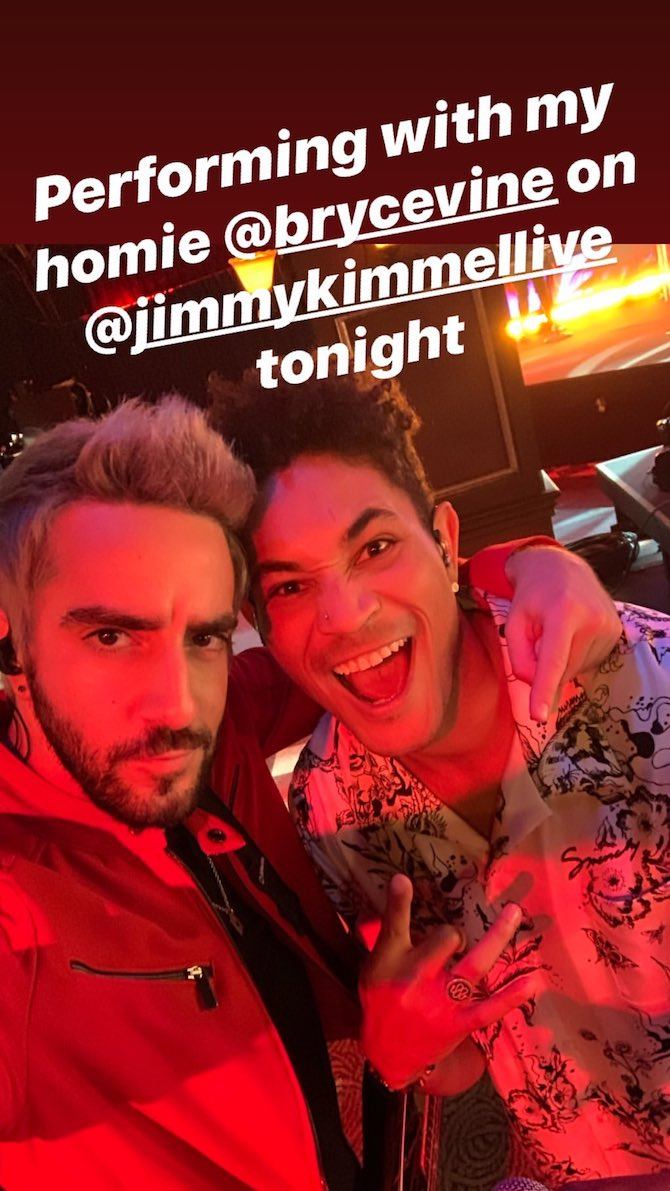 Vine also shared a short backstage clip as the crew were getting ready to hit the stage.

Kimmel introduced Vine’s “La La Land” performance from within the studio, quickly panning to outside on the street. There, Vine was joined by Barakat for a street performance before making their way inside.

Check out Barakat with Vine below.

Back in April, Barakat and frontman Alex Gaskarth chatted about when fans could expect something new from the band. In a hilarious and entertaining interview, the All Time Low members dished the details on what’s next for the band and how blink-182’s Mark Hoppus stole their lead singer.

“For those who don’t know, Mark Hoppus stole my lead singer,” Barakat jokes of the ATL/blink side project Simple Creatures. “Mark Hoppus was an idol of ours, well of mine, I grew up idolizing him and he turned his back on me. The ultimate betrayal.”

When asked if we could still expect All Time Low to keep pumping out the hits, Gaskarth quickly agreed. “Absolutely. Our plan is we’re taking a little break. I think hopefully by next year [2020] we’re gonna be ready to go again.”

Read more: Alternative Press turns 34: 13 songs we’d rather hear on our birthday, from All Time Low to the Smiths

As if new All Time Low wasn’t exciting enough, Barakat also revealed he had more in the works. “Alex is doing Simple Creatures, I’m working on a little somethin’, somethin’,” he teased.

The following month, the band gave more clarity on both ATL and Barakat’s “little somethin’ something’.”

“We are kicking music around, we are sending ideas back and forth, we are starting to get into the nitty gritty of it,” Gaskarth says.

“I think in the summer when blink gets busy and we put the pin in Simple Creatures for the minute, there’s going to be a nice window of time for all four of us get together, get in a room and start looking at the demos I’ve written, and breaking those down.”

Gaskarth goes on to say that work on their next album will likely take place during 2019 and 2020, as he said in the aforementioned interview.

However, Gaskarth then says the time away from All Time Low has been, in some ways, beneficial, noting that his time spent with Simple Creatures has given him a great platform to experiment.

“That being said, everybody has got their own thing going on: Zack [Merrick] has been tinkering around with island life, making the world a better place; Rian [Dawson] has got his studio in Nashville, he’s been working on a lot of bands and diving into a lot of genres; and even Jack [Barakat] has been dabbling around with new music with some of our writer friends – I’ll probably let him talk about that, as it’s not my place. It’s cool everybody’s got a minute to clear their heads and do their own things. It lets people refocus, and when we come back to All Time Low world everybody is kicked into high gear. It’s been refreshing.”

For those who can’t wait, you’re in luck. Days later, All Time Low hit Slam Dunk where they teamed up with Awsten Knight and then debuted a new track, “Getaway Green.” Check it out below.

What did you think of Barakat joining Vine on Kimmel? Let us know in the comments below!