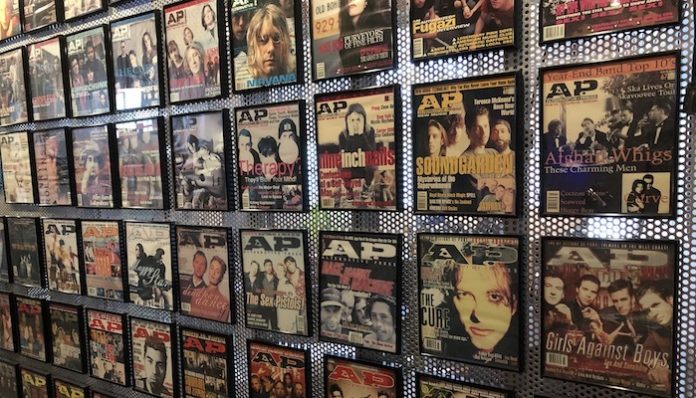 Imagine a world without cell phones, energy drinks, the internet, streaming services or Waterparks. It was a day like this 34 years ago that the first issue of Alternative Press was brought into the world. The four-page issue looked more like a ’70s high school newspaper than an underground “magazine” for marginalized misfits into music that no commercial media was ever going to touch, even with a sparkling new 10-foot pole.

Times change, but the need, desire and love for music never stops. Whether we seek out the new hotness, hide back into the tentacles of old favorites or take some left turns into our parents’ collections (ehhh…), music just makes life better. Trust us, we know something about this. That’s why Mike Shea started AP all those years ago, and that’s why it has endured as long as it has.

Here’s a baker’s dozen list of songs that have frequently ricocheted in the halls of the AP office at various intervals over the last three decades-plus. Yes, yes, we hear you: This list could’ve been an overwhelming thousand tracks long, giving you more deep cuts than a drunk hair stylist and having the LED meter in your brain peaking at maximum TL;DR. Besides, wouldn’t an infinity-spiral playlist be a great gesture to mark a 35th anniversary?

The main takeaway here is that we’re eternally grateful for all the support and love from music fans, subscribers, bands, labels, haters, parents and anybody else whose paths have crossed with ours in our storied history. Help us celebrate by turning your friends on to some new music, regardless of genre, visibility or age. Because if you’ve never heard it, it’s obviously new to you. Now where are those designer German chocolate cupcakes we were promised?

Appeared on: #1
Whether it was at their mid-’80s inception or in the decades that followed, the massively iconic Smiths stirred the hearts of the British indie scene and America’s college-rock world. Since then, it’s not unusual to hear testimonials about the greatness of Morrissey and Johnny Marr from sonically disparate quarters as hardcore tough guys and sullen goths. Most importantly for us, the band sparked the imagination of Aurora, Ohio, native Mike Shea, who started AP as a vehicle focused on news about the artists he wanted to hear about. Frustrated by Cleveland promoters’ inability to bring the Smiths to Cle on their first tour, Shea called them out on the front page asking them what the hell their problem was. “Please, Please, Please, Let Me Get What I Want” is his favorite Smiths song, and we hereby dedicate this list to him. Thank you, Mike. And while we have you here, name three good bands on Arista…

Appeared on: #5, #23, #46, #95
When we learned that Robert Smith and co. were finally being recognized by the Rock & Roll Hall Of Fame this year, we were equal parts celebratory and misty. (OK, maybe just the one grampire here raised a tissue or two.) There were 100 different vibrant the Cure songs we could’ve put on this list: We chose “Fascination Street” because it’s a cocktail of intrigue and mania conveyed with sharp guitars, synthesizers and Smith’s trademark voice. And if you don’t own Disintegration, you’re doing it so, so wrong…

Appeared on: #31, #54, #69, #114, #125, #134, #151, #162, #204
As alternative rock—and the subgenre of industrial rock—began to foment in the late ’80s and early ’90s, Nine Inch Nails founder Trent Reznor had a quick ascension. To that end, the Western Pennsylvanian transplant to Cleveland got real estate on eight covers (nine if you count his appearance as a member of i-rock stupor-stars Revolting Cocks). Did we even consider back then that this ultimate track from NIN’s Pretty Hate Machine was going to be forever kickass three decades later? No, because history is what’s happening now.

Appeared on: #44, #63, #71, #125, #204
The band who buried the hair-metal scene and got thrust into being the alternative-rock flagship act need no introduction. Now conventional wisdom would dictate that we’d slap “Smells Like Teen Spirit” here as the be-all, end-all track to measure the Seattle trio’s contribution to popular culture. We picked the lead single from their final studio album, In Utero, as a symbolic gesture. Nirvana decided to give the first story around that album to AP instead of to any number of other well-circulated outlets owned by corporations. We remain grateful—and we still miss Kurt.

Appeared on: #93, 103, 129, 148
Taking a circuitous (yet high-speed) route from would-be rock journalist to Trent Reznor protegé to public enemy to cultural touchstone, Marilyn Manson shook the hell out of everyone. He pissed off parents (who betrayed their youth by forgetting how much they loved Alice Cooper), as well as the indie-rock hordes whose just-rolled-out-of-bed slacker look was getting impenetrably boring, no matter how many amps they had. Manson made garish freakshow aesthetics de rigueur again, and a generation was transfixed. Whether he’s an Antichrist superstar, mechanical animal or server of steak and cottage cheese (sing that phrase to this chorus. —inside joke ed.), we’re perpetually interested in what the double M is up to.

Appeared on: #143, #167, #192, #195, #246, #291
People forget that for close to 10 years, Green Day were carving their names in the punk scene prior to signing with Warner Records and reaching heights that very few rock acts (punk, other) have even fathomed. AP has been lucky enough to watch the trio’s meteoric rise to superstardom, and “American Idiot” is the track that takes us back to when they routinely ruled the stratosphere.

Appeared on: #140, #155, #167, #252, #279, #295
blink-182 are one of the few acts that AP has covered consistently over their entire lifespan, and it’s been an interesting one. Now with the band releasing a new album in 2019 and heading on tour for Enema Of The State’s 20-year anniversary, it’s easy to ask “What’s My Age Again?” And it’s our anniversary; what the hell else would you expect us to pick? Fortunately, nobody is running around the office in tea-stained briefs today. Yet.

Appeared on: #197, #203, #210, #221, #258, #272, #300, #339
If there was one band who successfully bridged AP’s old-school alt-rock coverage (nicely swerving around the nü-metal hangover) and the climate of “the scene” as we know it, it was My Chem. The Jersey unit were taking their cues from unlikely underground corridors and diving into punk/alt-rock history—the same bands AP were covering. And anybody who has ever felt like an outcast saw the video for “I’m Not OK” and were empowered by the band’s energy, melody and delicious portrayal of revenge.

Appeared on: #213, #238, #304, #313, #325, #330, #335, #346, #359
Keeping in mind that AP has always covered bands who were on the periphery and willfully underground, it was inevitable that we’d come across the Vegas-based band in chimney-sweep drag. While one-hit wonder status might have looked inevitable after their significant lineup change, the fact that Brendon Urie went from employee at the Disco to CEO shows how committed he was to his craft. Surprisingly, after a decade in, we’re only starting to see the clones copping his moves. We’re glad to have documented the trajectory, accordingly.

Appeared on: #316, #329, #342, #362, #367
It’s easy to get nostalgic while covering bands who dominated the ’90s, which is why twenty one pilots’ “Stressed Out” is a great fit for this list. The song’s name itself perfectly encapsulates a day at the AP office, where we often get stuck late into the night debating our “Chlorine” conspiracy theories.

Appeared on: #336, #354
The trio founded by perpetually on vocalist/guitarist Awsten Knight are going far to leave indelible stains on the veneer of pop punk, punk-pop and straight-up pop. In a community where there’s so many psychic rulebooks to be “followed,” these guys talk too much, acknowledge the importance of honest-to-God boy bands and play their dork cards with aplomb. Waterparks go far to dismantle the scene’s clubhouse mentality and write some killer tracks as a result.

Appeared on: #366
iDKHOW—frontman Dallon Weekes and drummer Ryan Seaman—started their band with a fictitious backstory that they were a band lost from history. If there wasn’t an internet, they may have actually gotten away with the whole ruse, because the duo’s love of everything from ’70s glam, ’80s new wave and ’40s English music hall tropes sounds nothing like their previous jobs, nor any of the bands they end up touring with. Weekes and Seaman are looking backward to move things forward in the best possible ways.

Congratulations and happy 34th birthday to @AltPress — You guys have been and continue to be a mainstay voice in alternative music and culture. Thanks for all you’ve done over the years.