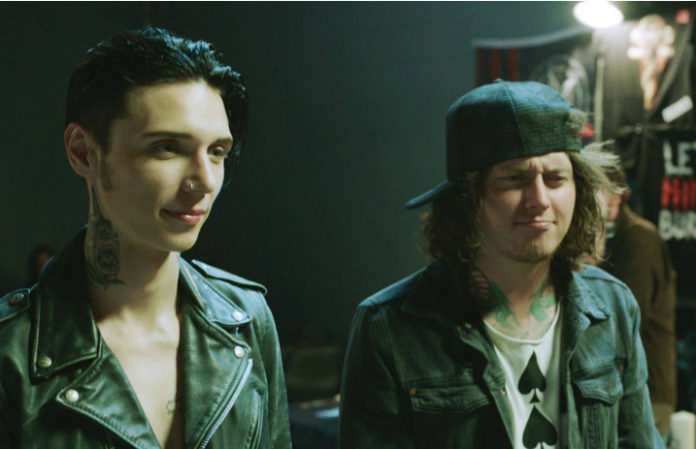 American Satan looks even better every time we get a glimpse at it, and the latest red band trailer is no exception. It’s a dark, sexy portrait of rock and roll that looks absolutely stunning. It's also completely and totally NSFW, so you might want to find a suitable viewing location if you're going to give it a look tonight.

The upcoming rock-themed thriller starring Andy Black, Ben Bruce of Asking Alexandria, and former Nickelodeon heartthrob Drake Bell is coming to theaters on Friday, October 13, also known as the best possible time for a movie with the name American Satan to slink on out to theaters. According to IMDB, you can also catch faces like Mark Boone Jr. (Sons of Anarchy) and Bill Goldberg (WWE Raw) among the movie’s stars.

The film follows a rock band with half English and half American members who move to the Sunset Strip to live out their rockstar dreams. With an original score composed by Korn’s Jonathan Davis and tracks from bands like Deftones, Circa Survive, The Pretty Reckless, and Palaye Royale, you know it’s going to be one hell of a party.

Previously there were several other trailers released in anticipation of the movie's release, like this deliciously grungy look at the fledgling band chasing their dreams of rock stardom. If you've ever dreamt of the wild side of being in a band, you'll no doubt find something here that moves you.

The new cities keep coming. Las Vegas you're the only US city to open with two screens because we love you. ❤️���� pic.twitter.com/6aXAdwYGZY

Interested in seeing the movie on opening night? You can go ahead and purchase tickets via the official American Satan website, where you can choose the theater chain selling tickets at a theater near you. There's only a select few locations showing the film, so make sure you check for your theater there. A slew of new cities were just added for opening night, so if you didn't see yours listed previously, you might want to check again!

How excited are you for American Satan? Let us know your plans to check out the movie in the comments below!