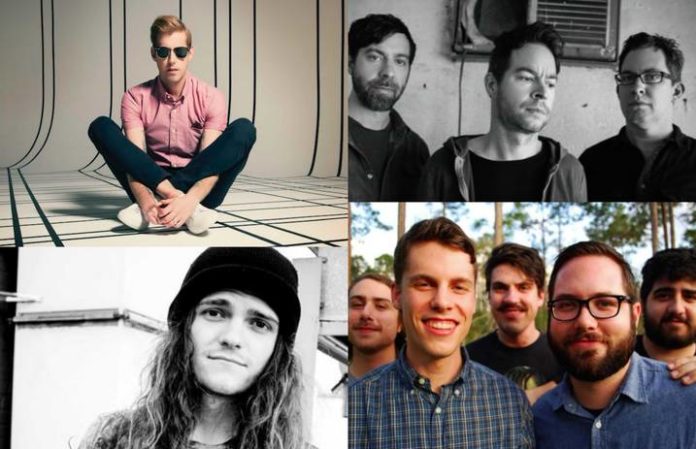 From Andrew McMahon's self-titled follow-up to You Blew It!'s album streaming early, check out news you might have missed today.

Andrew McMahon In The Wilderness have announced their new album, Zombies On Broadway, set to release Feb. 20. Not only that—but the Wilderness are also heading out on the Zombies In America tour with Atlas Genius and Night Riots. Check out the album artwork, a video promo, a statement from McMahon and the new tour dates below.

I'm proud to announce that my new album #ZombiesOnBroadway will be released on 2/10! https://t.co/cchZhpd4RY pic.twitter.com/Rkl4AkHBoD

“I wrote this album in the middle of a whirlwind, when the future was unclear. Isn't it always? I found my way to the city, thinking I could settle a score with a ghost. You can't, so I came home and rewrote the ending. I'm proud announce my new album, “Zombies on Broadway,” is coming on February 10th. I spent more than a year hoping to find new answers to old questions. What I found; I have always been two people; One in search of peace and the other in search of whatever makes my hair stand up and my heart beat faster. This record is mostly about the latter. You'll be able to pre-order the album starting next Friday, November 18th through my webstore and digitally on all your favorite outlets. A new song “Brooklyn, You’re Killing Me” will also be released alongside the pre-order.

To celebrate, we’re heading out on the Zombies in America tour early next year. Clever name, right? We're bringing out two bands that we love and have a feeling you will too, if you don't already. They're called Atlas Genius​ and Night Riots​ and they melt faces with their live performances. In hopes of convincing you further, we're going to bring out a really inventive production. Life's too short not to blow off some confetti and wear reflective clothing, or something like that. It’ll be fun, so see below for details and get ready for a good time.”

Run For Cover Records is offering its entire catalogue as pay what you want on BandCamp through this weekend. 100 percent of the proceeds will be donated to Planned Parenthood, and Run For Cover will match donations up to $5,000. Find the label's BandCamp here.

Chevelle have an epic new music video. Watch the creepy, asylum nightmare, mini-horror movie video for “Door To Door Cannibals” below, and be sure to let us know what you think in the comments.

Of the video, drummer Sam Loeffler says to Bloody Disgusting:

“Pete, Dean and I wanted to do a sort of 'nightmare/horror' type video for 'Door to Door Cannibals,' so we spent some time brainstorming and kicked around the idea of a mental/experimental hospital we find ourselves in and can’t wake up from. We thought it could be killer if we added some messed up elements that would make Pete freakout and question reality on his way looking for an escape, including a few open doorways with questionable events going on inside. I think we achieved a grittiness that created a sense of urgency but still left us with a little bit of creepy tongue-in-cheek style that some horror films are known for.”

“Door To Door Cannibals” comes from Chevelle's latest album, The North Corridor, which you can grab here.

Miss May I's Levi Benton has co-founded a new company called LOWD, which aims to connect the gaming and music worlds. Launched today, the company streams events of musicians playing the biggest titles in gaming, allowing fans to interact with them for free. And guess what: LOWD's debut event is live-streaming TONIGHT!

Featuring the first ever premiere of In Flames' new album Battles, fans will be able to watch the band play the new Call Of Duty Infinite Warfare live from the album release party in Los Angeles. See it all tonight, 7:30 p.m. to 8:30 p.m., here.

“Our mission is to have fans and music lovers not only discover new artists and games, but to be able to interact with their favorite musicians in a way that’s never been done before,” LOWD Gaming says on its website.

You Blew It! are streaming their new album, Abendrot, early. Have a listen below!

Abendrot follows-up the Orlando-natives' album Keep Doing What You're Doing from 2014.