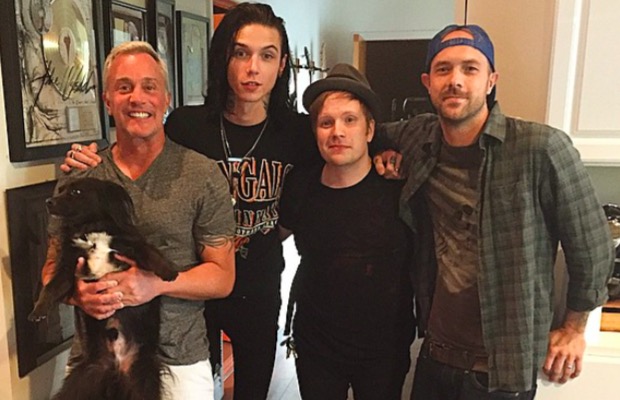 Black Veil Brides frontman Andy Biersack is currently in the studio working on his new Andy Black album with producer John Feldmann (Sleeping With Sirens, 5 Seconds Of Summer). Thanks to a new post on the BVB singer’s Instagram account, we now know that both Fall Out Boy’s Patrick Stump and the Used guitarist Quinn Allman have lent their talents to the record. You can check out the epic photo, along with a brief message from Biersack, below.

“The intention is to finish both [the Black Veil Brides and Andy Black] records concurrently,” Biersack claimed at the second annual APMAs. “I have almost all the material worked on for Andy Black. We're going to get in, start working with John Feldmann and do a Black Veil record, then I'm going to try to [get] an Andy Black record done.”

“I have something like 45 songs for Andy Black right now,” he added.

Black Veil Brides released their first live DVD, Alive And Burning, earlier this summer. The band debuted their latest studio album in 2014 via Universal/Republic Records. In case you missed it, watch them cover Mötley Crüe’s “Kickstart My Heart” on their recent headlining tour with Memphis May Fire.

Week 2 of #AndyBLACK in the studio! What a pleasure it has been today to work and talk music, life & experiences with the incredibly talented and kind @patrickstump and to have @quinstagram playing guitar and adding his vast talents to this record! Thank you @johnfeldy for being the fucking man. This is truly a dream come true making this record! Photo by @zakkcervini (shoutout to little lightning)