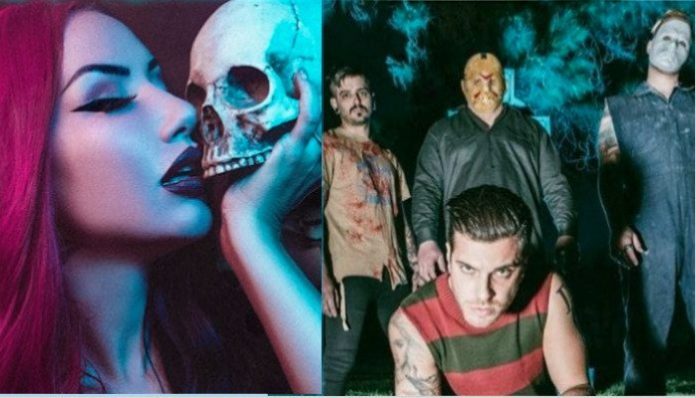 Ash Costello of New Years Day and Ice Nine Kills are getting together for a tribute performance for a horror movie.

Screamfest Horror Film Festival will be celebrating its 25th anniversary Fears and Beers screening with The Crow. Before the show, the musicians will take the stage to introduce the movie in the most punk-rock way possible.

The performance starts on Wednesday at 7:20 p.m. at the TCL Chinese Theater. You can see the promo posters for the show below.

Have you heard the surprise for our 25th Anniversary #FearsAndBeers screening of #TheCrow this Wednesday-  June  5!? @Ashcostello from @nydrock will be joining @ice9kills for a special tribute performance before the movie starts. So, if you haven’t yet get your tix before it sells out, come early and enjoy the show! Performance will start at 7:20 at the @chinesetheatres, Parking tickets are $3 with validation from #BoxOffice. #RnR #acoustic #livemusic #thingstodoinla Visit www.screamfestla.com for tix and more info!

A post shared by Screamfest Horror FilmFestival (@screamfestla) on Jun 1, 2019 at 4:30pm PDT

You can grab tickets for the event here.

Although New Years Day had to drop off their tour with Ice Nine Kills, Falling In Reverse and From Ashes To New they got up to some cool adventures before leaving.

Members from Ice Nine Kills and NYD made a quick stop at the house from Halloween: Curse Of Michael Myers.

Apparently, Ice Nine Kills vocalist Spencer Charnas told the crew “let’s go in this house and kill everyone in it,” which is the best thing you could say going in there.

It’s no secret that the band has a deep love for the horror genre, especially Charnas. The vocalist previously visited the town from Scream with APTV for the film’s anniversary which you can watch below.

Costello also mentioned one of her favorite things to do on tour is visiting fictional and real-life horror locations. After seeing this awesome photo, we’re wondering what other sites they’ve visited.

While it’s unfortunate New Years Day had to drop off the tour we’re glad they could share this moment with Ice Nine Kills.

Ice Nine Kills announced a summer tour with Toothgrinder and Hawk to support their latest album. The two-week tour takes place in July and tickets are already on sale now. Check out the list of dates below and grab your tickets here.

What do you think about this collab performance? Sound off in the comments below!